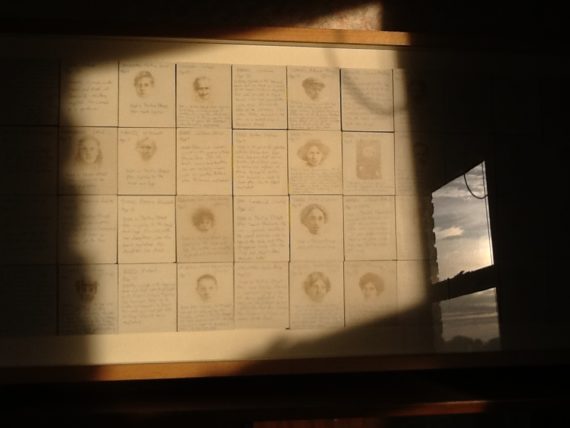 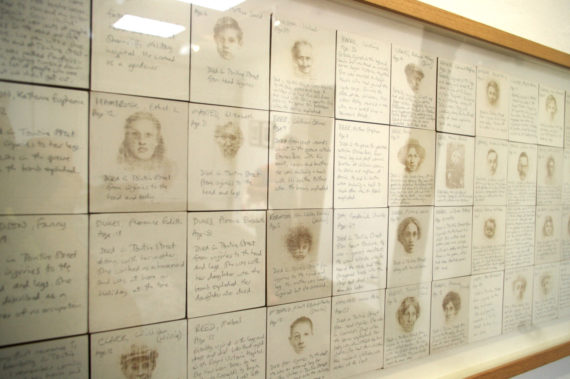 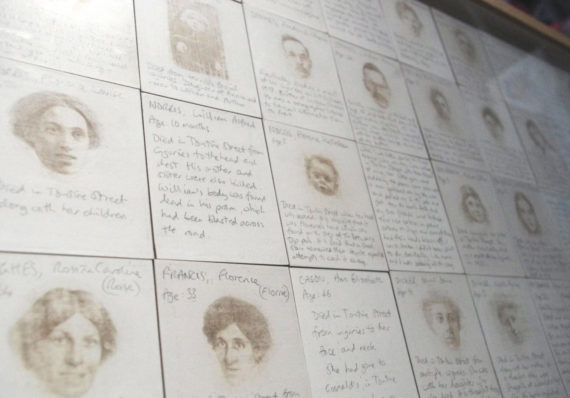 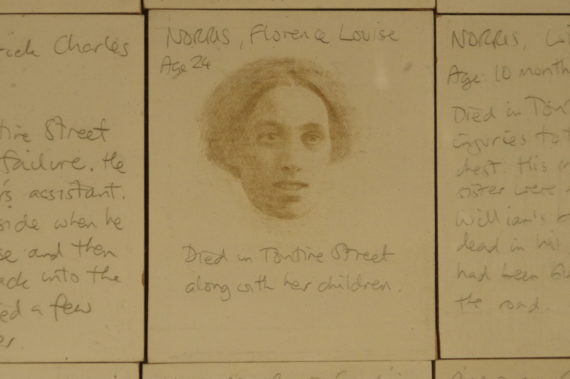 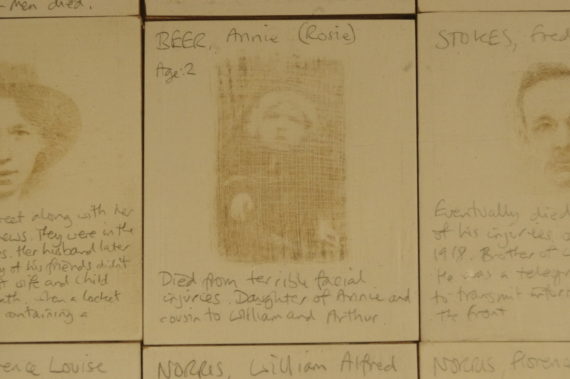 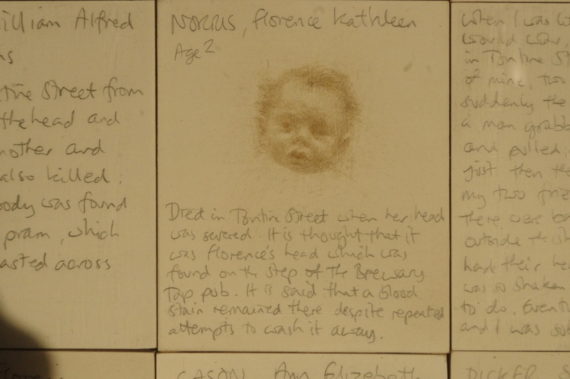 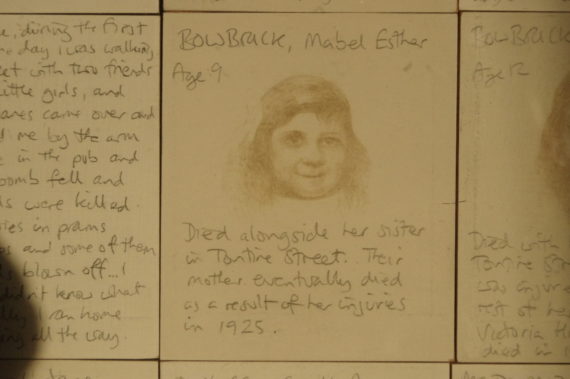 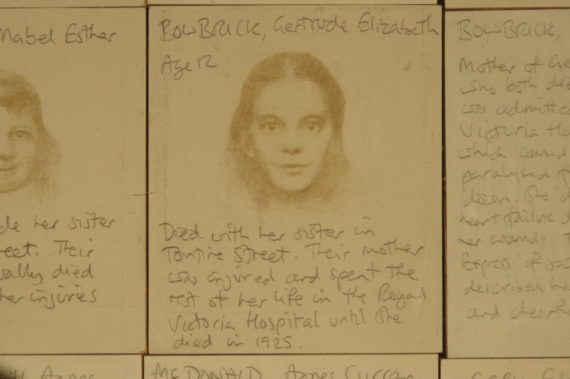 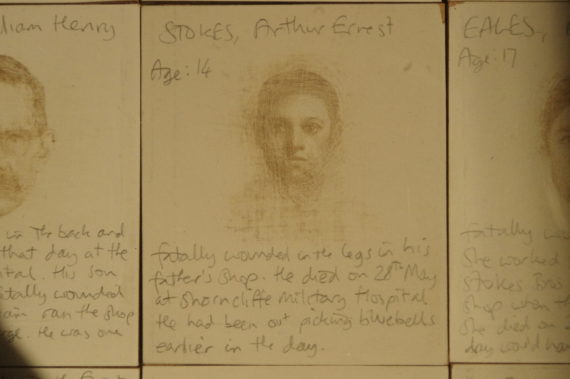 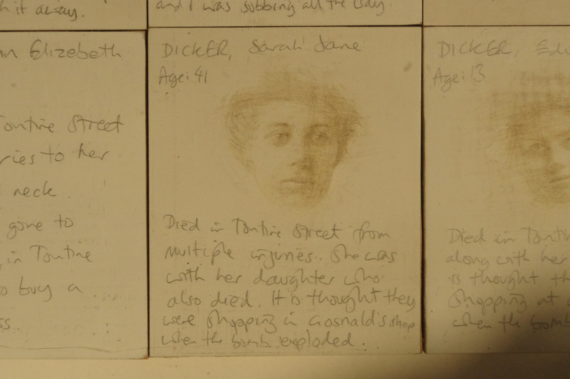 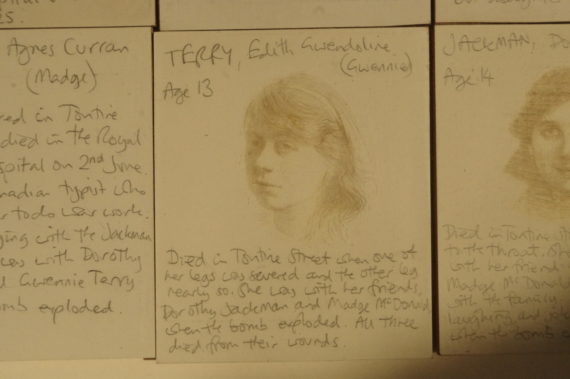 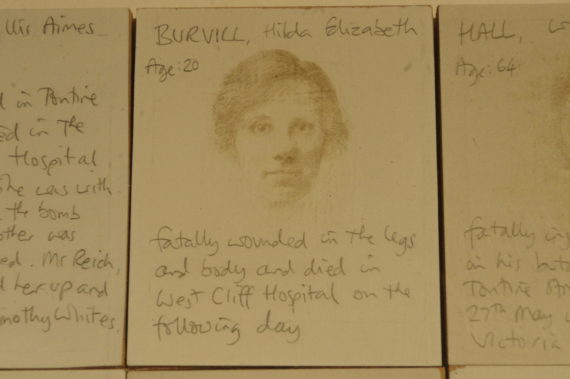 Here is a drawing I worked on in 2011-2012.  It will be on show, for just a few hours in a Church in Folkestone on Thursday afternoon.

Thursday will be the 100th anniversary of ‘The Great Folkestone Air Raid’ of 25th May 1917.  The people organising a memorial event have asked me to show this drawing as part of the day’s commemorations.  This work is about the people who were killed by a bomb which exploded amidst a queue of people standing outside Stokes’ greengrocers in Tontine Street at about 6.22pm on 25th May 1917.

The drawing consists of sixty-eight small panels containing drawings of some of the people who were killed and handwritten text listing their names, ages, cause of death and, perhaps some other details about them.  Where there is no visual reference for their appearance to draw from there is simply text.  The title of the piece – “They looked like silver birds. The sun was shining on them…” – comes from an eye witness account of seeing the German Gotha bombers high up in the late afternoon sunlight just a few moments before the bomb was dropped on Tontine Street.

This work is part of an occasional ongoing body of work about the victims of the 25th May 1917 Folkestone Air Raid.  It is ‘occasionally ongoing’ partly due to lack of time and money needed to make the work I’d like to make but partly also because of the upsetting subject matter of the work; it’s emotionally difficult to concentrate on such a sad story for long periods of time.  I made this work because I wanted people to know about this story as it seemed as though it might soon be forgotten.  The story itself is sad but it can have a bigger meaning in that it can stand for similar stories we hear about in the news all the time.

This particular drawing has been seen in various galleries around the country including The Jerwood Space in London, The Hatton Gallery in Newcastle, Plymouth Arts Centre/Plymouth College of Art, The Sidney Cooper Gallery in Canterbury (all these as part of the 2013 Jerwood Drawing Prize) as well as in my hometown of Margate (at The Pie Factory Gallery and East Kent Artists Open Houses).  At last it will be seen in Folkestone.

In Folkestone it will be displayed on a table in a church rather than in the more usual ‘white cube’ style gallery space.  Ordinarily I might worry about the placing of this work, but on Thursday the overriding significance of its placing will be its presence in the town of Folkestone.  Some of the relatives of the victims of the air raid will also be present.

The medium of the drawing is silverpoint on gesso.  Silverpoint drawings are literally the traces of metal drawn over a prepared surface (similar to the sort of mark you might make if you were to drag a coin across an emulsion-painted wall).  It’s an extremely subtle drawing medium which leaves an ever-so-slight trace of its touch upon the surface.  It’s a gentle medium but the mark it leaves is indelible.  Its delicacy and its quality of ‘trace’, which this medium brings to the fore, make it an appropriate medium for an art about memory and presence.

You might also find the BBC Radio 4 drama series ‘Home Front’ interesting in relation to this too.

The day’s events have been organised by the local historian, Martin Easdown, and a descendent of one of the victims, Margaret Care – this is a labour of love.

For more information about the Folkestone air raid memorial service go to: http://www.leshaigh.co.uk/folkestone/tontinememorialservice.html

For more information about my work go to my various social media places listed below: