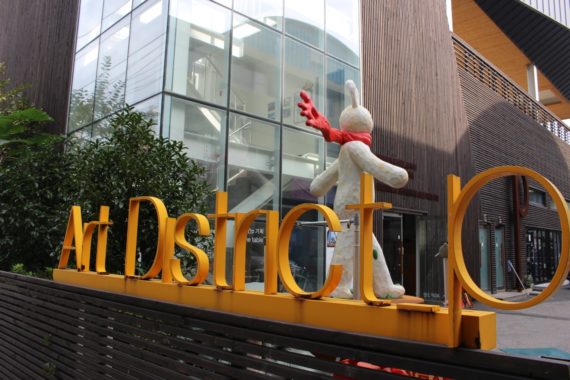 I decided to make a trip to Busan from Gimhae (they are about an hour apart) when I accidentally discovered that the annual Busan Firework Festival was precisely the day after my visit to ClayArch Gimhae. So it had to be done! I was already planning to fly to Jeju from Busan-Gimhae airport, so it was easy to delay my departure by one day to take advantage of such fortuitous timing. I had big expectations for the firework display and I am pleased to say I was not disappointed. 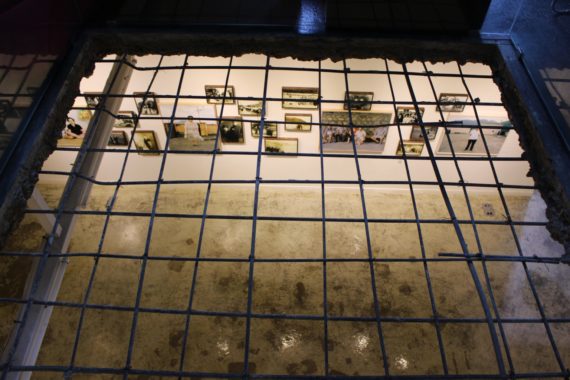 I hadn’t had time to book accommodation for this little side trip before leaving Seoul, so during the evening hanging out with the AIRs at ClayArch, they all gave me suggestions about where to go in Jeju (it seems to be that everyone in Korea has been to Jeju on holiday). Also, when I mentioned I was seeking accommodation in Busan, Minhae Kim, an artist who studied at my old haunt Chelsea, mentioned that her partner is doing a residency in Busan, and before I knew it, she had arranged for me to stay there for free! Not only that, but one of the AIRs at ClayArch, Kwanghun Cho, was driving to Busan the following morning and offered me a lift. How easy was that?! 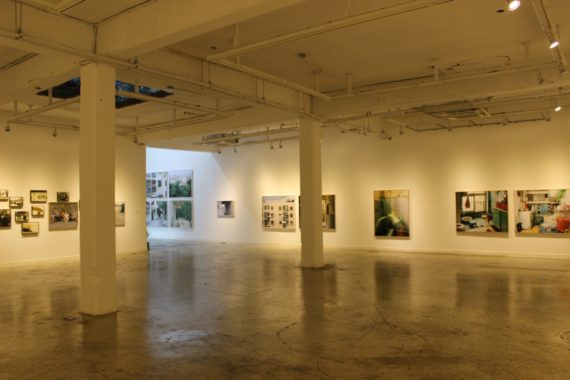 So off we went to Busan the next morning, and Kwanghun dropped me at Residency P. Two French AIRs were there to greet me, and I ended up spending most of the day with them and Younguk Kim, Minhae’s boyfriend. Younguk studied at Central St Martins, my other old haunt; another coincidence.

First of all I got a tour of Residency P. This is another interesting set-up. It turns out that it is run and financed by Panax, a big industrial complex all around the immediate area, and their business is making pigment. So to create an artists residency is a logical choice, given the product! Panax is huge, with multiple buildings, factories, warehouses and residences, several of which are designated and set up for the artists. There are three different residencies there. One is called Photone and is a very well equipped photography studio with a large format printer. The second is called Kumsa Rock and is a recording studio, equipped with mixing room, drum room, various other rooms for making music and a proper music venue which regularly hosts gigs by local and famous artists. The third residency is called Creative Space P and is for fine art. There is also a building for education and in fact there was a children’s workshop in process. The artists at P are paid to run the workshops. There is even a kiln and basic clay facilities.

The accommodation is mainly in one building, where the artists have a room for living and working in, which means you are literally living in your studio, which might not be to everyone’s taste! There is another building full of apartments, which is where I stayed – basic accommodation for workers and overspill for visiting artists. All the staff at P are artists, and it seems to be very well managed. There is a nice café with cheap prices for the AIRs. But the best thing about this residency is that it is completely free! We talked about this extensively, and I learnt there are loads of free residencies around the world that are often not very well known. It seems they are the lesser known ones and once you get on the wagon, you start finding out about the others. 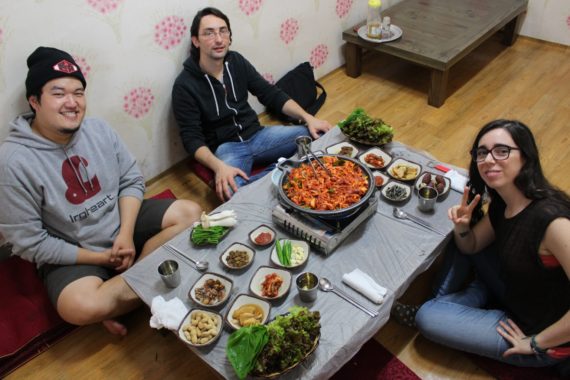 Then Younguk took us to a fantastic restaurant for a very typical Korean lunch. We had our own room in a house – it could have been a bedroom or living room, with just one low table and cushions on the floor. We spent several hours eating specialities from the area. 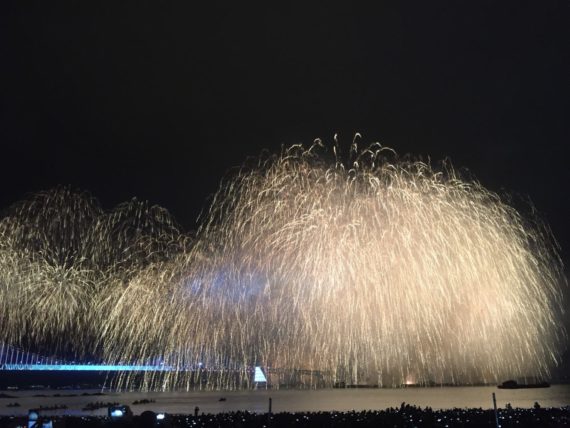 In the evening, Maria, one of the French AIRs, accompanied me to the fireworks. They are traditionally on Gwangali Beach, where there is a bridge crossing the harbour directly in front of the beach; a good vista for a display. We were not disappointed. Everything about the experience deserves superlatives. So many people (maybe half a million?), such spectacular fireworks that consisted of two displays with an amazing performance of lit-up stuntmen with propellers with high pressure water jets sending them flying above the waves, somersaulting, wow.

All in all, it was really worth while going to Busan! My expectations were that I would be alone, a tourist, sightseeing and returning to my hotel room before the flight to Jeju in the morning. That’s what I love about independent travel. You can never predict what will happen next. 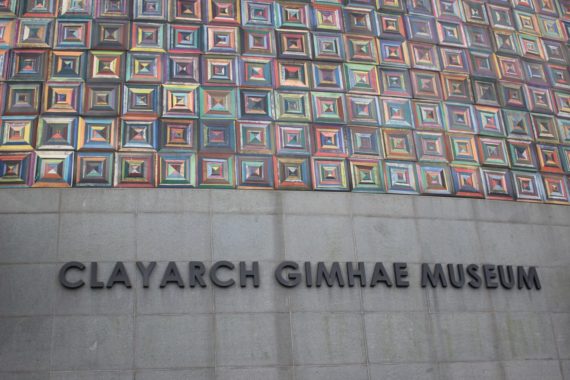 One of the official visits planned for this trip was a visit to ClayArch Gimhae Museum, in the south west of Korea. ClayArch is so-named due to its primary focus being architectural ceramics ‘Clay’ and ‘Arch’ for architecture. It is considered a leading institution for this form of art, hence my interest, given that this has been my area of specialism for over 20 years! Gimhae was also a site of production for the Buncheong ware of the Joseon and Gaya eras.

KyungWon and I were met at the station by Seung Taek Kim, the residency manager, and swiftly whisked off to a delicious lunch (Korean food at its best – barbecue cooked on the table in front of you) with the director of ClayArch too. 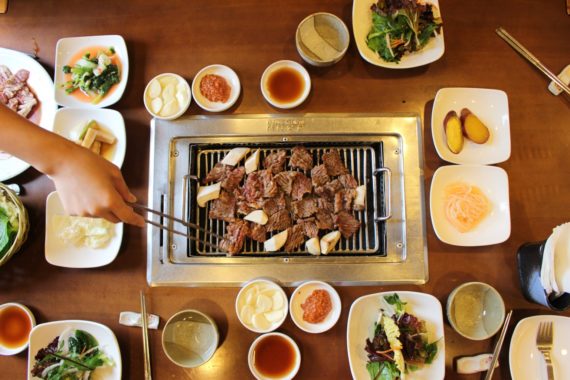 ClayArch is a huge complex, comprising of a very impressive museum building, another gallery building with multiple exhibition spaces, workshop and living quarters for artists in residence, an educational building, and the list probably goes on with further buildings I did not see. 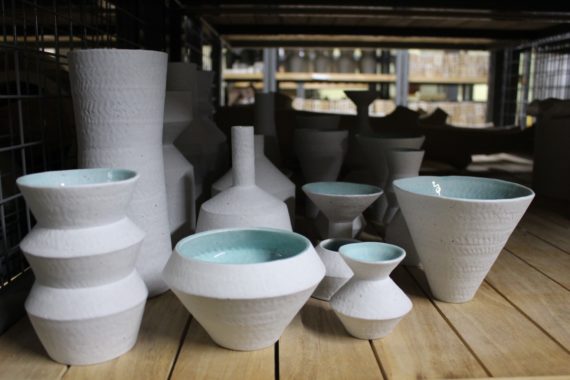 As soon as we arrived, I was privileged to see behind the scenes in the collections room; always strange to see such remarkable and valuable works of art sitting on shelves in a storeroom! I spotted some of Kiho Kang’s work, who is showing in Made in Korea.

Then we were shown round the current exhibition, Post-Tile, which was excellent and inspiring. Mainly Korean ceramists with some international ones, and a mix of ceramics with digital media too, including some very good films showing the process behind some of the work.

Then Seung Taek took us to the residency building; fantastic equipment as one would expect, generous studio spaces in a huge warehouse style building and, upstairs, spacious rooms arranged around a common room and kitchen. 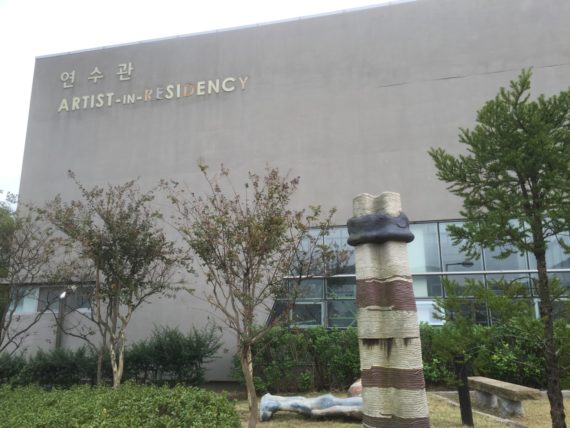 I met all the current artists in residence, who are making interesting work. The residency happens twice a year for a period of 4 months. I considered applying to make my work for the exhibition here, however the set dates did not fit my schedule and to be honest I would have found it difficult to take four months out anyway. Shame, because now I’ve been there I am very inspired to go. Maybe in the future…

The artists invited KyungWon and I out that evening. The Gimhae Buncheong Ceramics Festival was on, so we wandered around the fair and had fun.

There was some pretty hilarious(ly bad) entertainment on offer much derided by the AIRs!