Krzysztof Fijalkowski is due to give a talk in the Project Space this evening. Variously active as an artist, curator and translator, his recent activity has included catalogue publications for the V&A and Tate Liverpool and a forthcoming book on Czech Surrealist Photography. Here’s some information about the talk:

This talk will focus on his contributions to two past exhibition projects around the themes of space, psychoanalysis and surrealism: Kathleen Fox’s installation The Spaces of the Unconscious at the Freud Museum London, and Surreal House at the Barbican Gallery, both in the summer / autumn of 2010. Kathleen Fox’s work focuses on issues of memory, dream and the object, and was installed in a space that was once Sigmund Freud’s bedroom, drawing on his collection to create an environment for a dialogue between conscious and unconscious space.

The process of securing, developing and funding the project is a second set of narratives to add to the theoretical ideas underpinning the work. Surreal House, on the other hand, was a major international exhibition exploring the intersections between surrealism and architecture, an area that relates closely to Krzysztof’s own research and practice interests, and resulted in this case in a chapter for the exhibition catalogue. 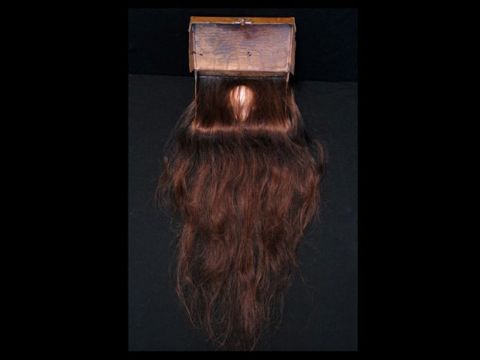 A glorious morning, sun streaming in, taking video and polaroids in the last incarnation of the work in the Project Space. 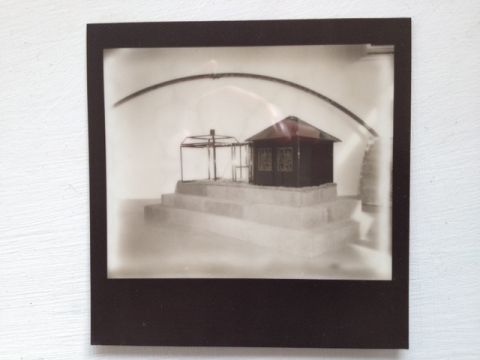 Ended today with the feeling that I am just getting started.

Polly Cruse from Satellite Artists spent the most part of today arranging work in the space in a new way and with a particular scultpural aesthetic. More moving things around. Polly was keen to play with the layers of viewing through glass and patterning with interesting results. i think it is hard coming into a space that has already been curated (three times in three days), but after some initial hesitancy Polly was able to launch into shaping things more to her own interest, but through dialogue with me.

The space was open to visitors later in the day, so this was the only stage in the transformation that has been seen in public. There was some interesting discussopn about the curatorial and artistic process.

Tomorrow morning I hope to have more time in the installation to reflect on the work and process of working. Maybe do some ink drawings, before I start shifting things around again.

Here are just a few of the images from todays changes.

Stephanie Douet, The Queen of Hungary Project Space, came into the room today to leave her preferences imprinted on the arrangement. She lauched into shifting and adding and subtracting works, moving the emphasis away from bunkers and WW2 towards the Iranian influences. The House-Bunker stayed of course – concrete too heavy for me to contemplate ever moving it again, ever, but was added to. The posters also remained in poition, but other than that it was all change.

The addition of the projected video today lifted the room somewhat, although I coudn’t get the thing to loop this time.

A very tiring day with lots of lifting heavy things, but also much thinking, which can also be tiring.

Here are some images of the shifting space taken throughout today. Tomorrow there is another change and then some guests arrive – but which incarnation should they see that’s the question.

This morning I placed the House/Bunker/House on the concrete blocks for the first time (carefully on some grey felt) and tried the fluorescent acrylic rods. Whilst there are no where near enough of them yet and they could do with being rather thicker, the light gathering works in a rather magical way, placing illuminated yellow spots on the dark interior. That also means I will have to work out another way of fixing them in place as the inside is too good to miss.

Nicola Naismith from Satellite Artists came to the space this morning and we had a meaty discussion about the placing of the work. Under her direction I took a substantial amount of material out of the space, clearing the view and perhaps visually cleaning it. Tricky to make just one cohesive, pared-down ‘show’ in the one room as there were two or three shows hidden amongst the mass of stuff. There was a big chat about the ‘lace that has still not been turned into the work it was supposed to be,’ and the nature and qualities of working with lace.

I spent the afternoon consolidating the changes we had made and later talking to Stephanie about work she has made for Sinopticon. Day 2 ended with me enjoying taking pictures of the sunset reflected in the glass piece Bagh I Tut.