A day of travel on Saturday to complete our talk at The Minories, Colchester about The Queen of Hungary raison d’etre and making connections. Most of the technology worked, which is always a relief.

We thought we ‘d left ample time, leaving home at 10.45 a.m for a 2pm talk, but, in the event, had little time even for a cold drink, let alone any lunch. Perhaps that highlights the spread-out character of this region and the distances often involved in order to just meet up. On the way back to the station Stephanie bought some of the most plumptious and tasty grapes I have ever become aquainted with. And the walk back through the park was lovely.

I think we could usefully repeat this talk up here in North Norfolk at some point, makingbest use of the limited time and resources available to us. 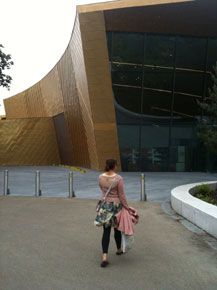 Today Stephanie and I have been preparing our talk for the M.A students in Colchester tomorrow. We’ll be discussing the benefits and hindrances to artistic practice of running The Queen of Hungary as an artist’s space. Just the usual stuff like not having time to make one’s own artwork because one is preparing a talk about pros and cons of running a Project Space. Stephanie will also give some context and origins to the QH Gallery.

What I am rather, perhaps sadly, pleased with is a mind map detailing a few of the connections and networking relationships that we have both been tangled up in and that have led to this project or that event. It does make me wonder about some of the interesting connections that I just never followed up.

I went to Stephanie’s house this morning to run through what I had written and left wearing a plastic medal for road safety that I luckily remembered to tuck inside my raincoat.

Well, this image is from the QH archive, cannot remember what year, maybe 2002? Ten years?? 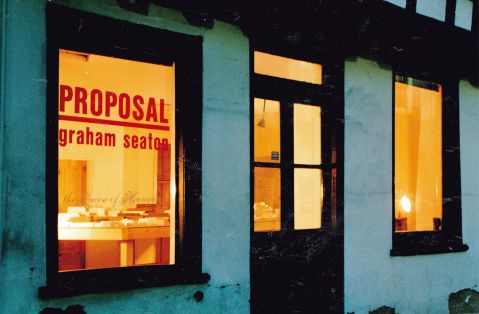 Judith Stewart Residency.Slightly disturbed at the start of today as 4 of the ponies were moved again to the other side of the space which not only meant I can’t see them when I’m working but a solitary pony was left running up and down neighing. I had an early visitor who is obviously culturally intimidated by art spaces, taking 2 attempts to cross the threshold and then leaving quickly with barely a glance.Many thoughts today about the appropriateness of the space for this body of work and the way the noises/weather outside add to the recorded sounds/experience. This afternoon I started moving things around again, introducing new projections and removing some of the photos.Judith Stewart

Yesterday (Thursday) spent introducing images from a different set of works that are less resolved and more awkward. I wanted to see whether this disrupts the works arising from the Orford Ness residency which were starting to look self-contained. I also worked with the video projection ofLiving in the End Times as a double projection and had one of those brainwaves that lead you to think you’ve found a really brilliant way of putting something together and then you try it and it’s a complete disaster and you realise that your original thoughts were better after all…The evening conversation with Barbara Howey was interesting (for me anyway) and has provided plenty to think about.

As a result there has been more talking and less doing today: mostly with Joanne Lee who came up from Brighton, asked probing questions and made useful contributions about options for realising the work in different formats. Other events include:

The ponies have been moved to a different field;

At the Project Space artist to artist talk today: After looking around the work, Judith Stewart and artist Barbara Howey will discuss the landscape of East Anglia in relation to landscape tradition, the sublime and the gaze. 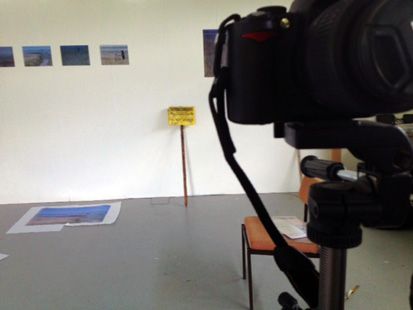