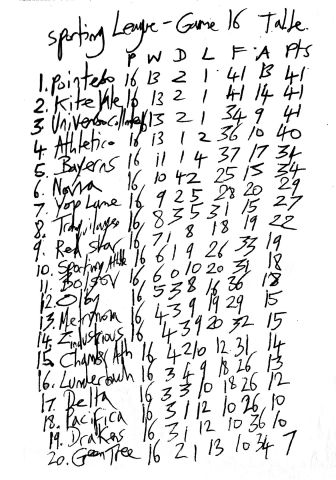 Formed in 1985 , The Sporting League has continued to thrive. Teams such as ‘Athletico’, ‘Tranquilayers’ and ‘Bayerns’ could be considered as the eternal ‘big guns’. However, smaller clubs such as ‘Universo Collunteen’, ‘Pointeso’ and ‘Novia’ have gained momentum in recent seasons.

Universo Collunteen and Pointeso lost a bit of ground at the top as the match finisihed as a cagey one – one draw.

Sporting Radio Pundit X: ‘I couldn’t see a winner all day long in that one to be honest. Lots of long spells of possession by the champions Pointeso – but you always felt that this game was gonna be about not losing. Pointeso should’ve gone all out…the Universo lads are punching above their weight at the moment…’

Leaders Athletico made easy work of their match against transition giants Bayerns – turning them over at home by two goals to nil.

Free scoring Kite Vale came back from a goal down to defeat Sporting Athlete by three goals to one.

Athletico held onto the top spot by the skin of their teeth after a nervy win over yo-yo club Yop Lane.

Sporting radio pundit X: ‘The thing is, you never know what you’re gonna get against the ol’ Yoppites. One day they’ll be atrocious…the next sublime. This was a strange one where I’ve gotta say they were simply average and the Athleticans weren’t much better. The Athleticans need to man-up as they’re in pole position. I can only see ’em implodin’ to be honest…’

Vale gaffer: ‘I’ve just been looking at the stats and am pleased to see that we’ve got the most goals thus far over the season. I’m proud of our forward line – we’ll always get goals. I’ve been hearing many rumours of late about us selling our strikers…it’s not going to happen on my watch.’

Pointeso kept up the pressure as they came back from a goal down to defeat Red Star.

Universo Collunteen were sensationally knocked off the top spot after a sensational implosion against relentless Kite Vale…losing by FIVE goals to nil.

Universo gaffer: ‘We just didn’t turn up today. It’s dissappointing for the fans first and foremost…I’ve certainly got no excuses. Credit to Vale because they came here and outplayed us in every part of the pitch. I think you’ve gotta put them up there as favorites along with Pointeso now.’

Athletico haven’t played the most exciting football this season but now find themselves in pole position after a convincing goal to nil victory over tough Novia.

Champions Pointeso got back into their stride with a three goals to nil win over the potential banana skin of Olby.

Pointesian associates on the Vaconsoft Parkway zone have spoken out against ‘sour grapes’ being purveyed on the ‘Tranquilayers vineyards.’

‘Just sick of the hypocrisy of Sporting Radio and others who have campaigned for years about Contemporary Culture and The Pointeso Scene.

Now the back is being turned on this stance, in order for there to be a media conspiracy against those Hilti Forest Tranquilayers based executives in order to push the old guard back into the fore. They won the league a couple of years back but will struggle for another twenty years now.

Let’s stand up for Pointesian values and over the next 12 months don’t let this media conspiracy grind you down.’

Pointeso and Kite Vale cancelled each other out in this chess fest resulting in a nil – nil draw.

Sporting Radio Pundit X: ‘Lets just say there was none of the ol’ champagne football out there today…it was more a case of downin’ a couple ‘o’ the old white lightnin’s and hopin’ for the best…’

Pundit Y: ‘Well can’t blame them to be honest. I think both sides will play all out come the business end of the season.’

Universo Collunteen made the most of the preceding bore draw as they put five past Chamber Athlete.

Universo boss: ‘Credit to our hosts Chamber – I think the result was flattering to us really…it’s good to get ourselves back on top of the tree.’

Sporting City executives currently looking into long-term effects of inhaling nicotine vapour, but there is no evidence to date that it causes cancer or heart disease as cigarette smoking does. Indeed, many researchers agree that e-cigarettes will turn out to be much safer than conventional cigarettes, an idea that e-cigarette companies have made much of in their advertising.

Sporting League health executive Paula Hooraza: ‘Yap…we’re keeping an eye on things at the moment. There is a concern that the vapours could be affecting player performance. I only got a report in the other day from one of our premier clients who suggested that the haze at the stadium may have prevented their top stars from performing…’

Pointeso made easy work of their home match versus Chamber Athlete – running out as four goals to nil winners.

Chamber Athlete gaffer: ‘We can’t use the downturn in our finances as an excuse for poor form. We need to just steady ourselves during the early period of our matches. The Pointeso set-up is going to be tough to keep up with for all the teams in contention. I can’t see Kite Vale keeping their form up to the end of the season…they’ll struggle when the injuries come. This Pointeso outfit are only going to get stronger.’

Kite Vale tore apart Olby away from home with a convincing five goals to nil away win.

Universo Collunteen won in the socialist duel against the industrialists of Zindustrious – winning by three goals to one.