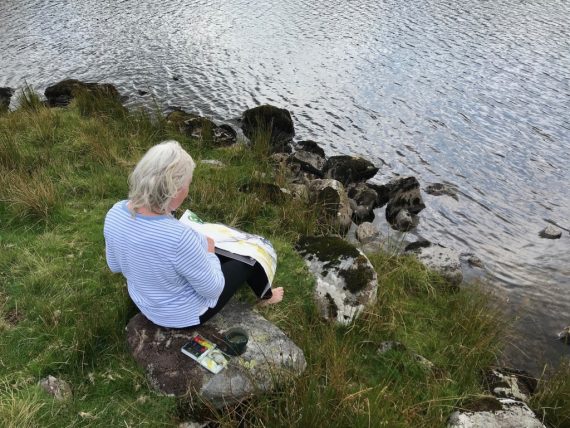 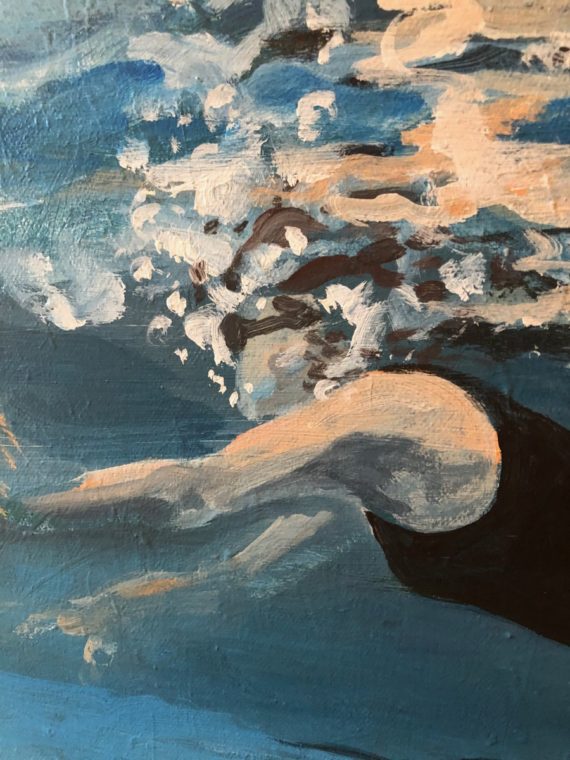 Wow….. months since I blogged. So much and Nothing has happened.

Covid lockdowns – In common with many artist friends, I felt a sense of paralysis. Unable to move forward…. stuck ……waiting for inspiration….for things to get better.

Lost my Sudbury studio…moved into the dining room at home….but this just didn’t work. My working space is important and has a big impact on how I feel about art. It sounds like an excuse but to me it feels real and necessary to have a space where I feel comfortable. I’m sure I’m not alone in this? 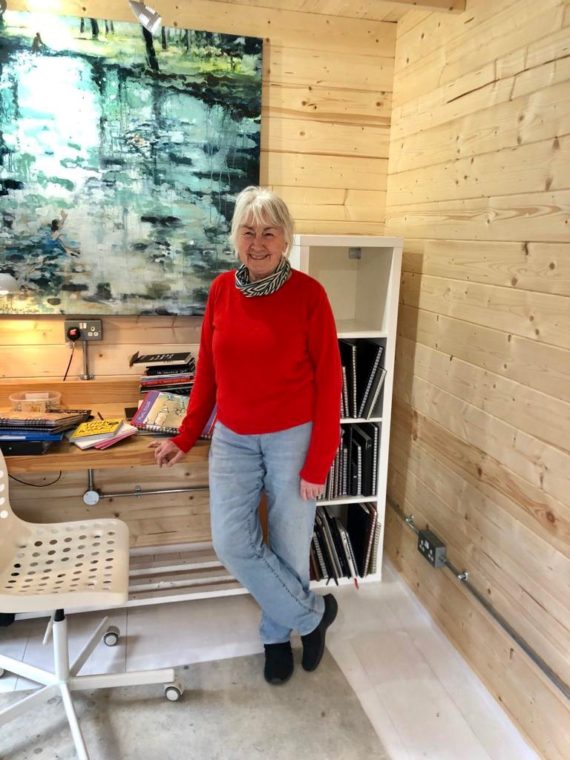 Discovered I enjoy long walks across the flooded Water Meadows ( 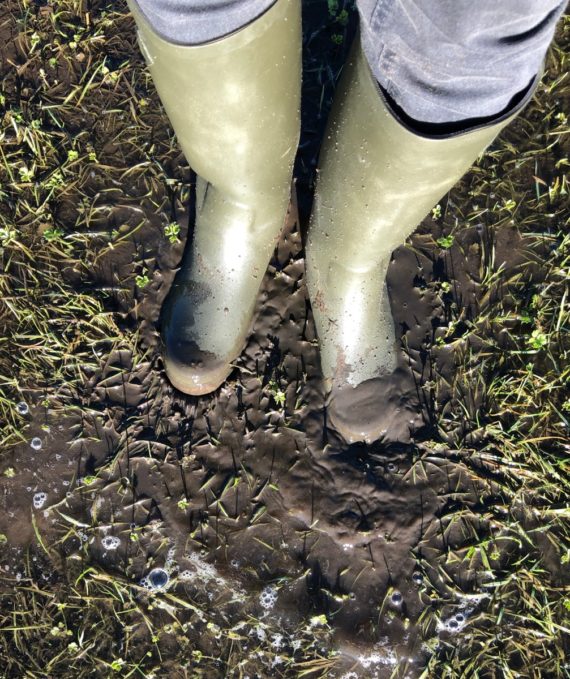 in my posh new French boots.)

This inspired new work of course and following on from the Newlyn Art School online course which I bought in desperation after months of artists block, I seem to have struck out again on efforts towards abstraction.

As people often begin a new blog… I simply can’t believe it’s been so long since I blogged. But not having anything significant to say is the main reason for my absence. Now I think I have something to say.

What inspired this? Australia? Red ferns growing on a Cornish cliff?

Perhaps Walton on the Naze red crag teeming with fossils?

It’s reminiscent of all these places. Any one of them could have been floating around in my mind as I slathered delicious paint around in a semi-attentive mood. Yet it’s not really any of these. It just slipped onto the canvas  when I was feeling very low. The day before the second Covid19 lockdown. How on earth was I going to get through 4 weeks of barely leaving the house let alone going somewhere beautiful to sketch and swim – my normal way of starting? 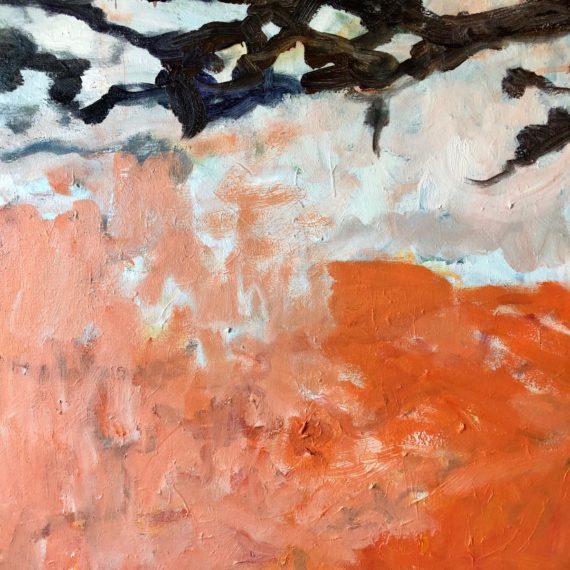 Then I watched an astonishing TV programme –The Disordered Eye on BBC4. The two incidents may seem unrelated but after the programme I may be on the verge of emerging from a very long period of feeling stuck, floundering about, chasing unsuitable red herrings and generally regressing in my quest to become a proper artist…..Something clicked in my mind.

Obliged in the recent past, to provide an ‘Artists Statement’ at University and then again when I started to exhibit my work at exhibitions, I used to write sentences such as ‘my landscapes are not purely visual representations but attempts to paint the feelings of how it felt to be within a time and space and to express the multi-sensory experience’ ….. Hmm , well yes I thought that was what I was doing. But the theory was so much better expressed by Richard Hutchins in his remarkable documentary about Sargy Mann, the blind Suffolk painter and Keith Salmon, another blind painter. He went on to cite Degas, Monet, Cezanne and others. Many painters whom I have always admired and instinctively been ‘drawn’ to.

Those bland statements I had reluctantly forced myself to make were actually not so different from the principles of the poorly sighted artists which suddenly gave more integrity and purposeful meaning.

This little painting  subconsciously illustrating a memory was , I think, one of the most significant I have ever painted. It came totally unprompted  and I only realised what it was about some time later. By freeing my mind and tapping into my subconscious I had painted a deep-felt truth. No need to explain it  further. With the photo next to it, I hope it speaks for itself and if the meaning is unclear, the viewer can interpret it in their own way.

I don’t need to go trudging around to find fresh scenes to inspire paintings. I actually can’t, due to the second Covid lockdown anyway.

I have, at my disposal,  millions of memories of sights, sounds, experiences on which to focus and paint. The most difficult issue will be not to focus  too consciously, but to let things just evolve. This time I must just let the paint truly dictate. Another phrase I once used which at the time was quite meaningless, but which now I’m beginning to understand.

And yes, my blogging is back.

Inspired by Tom Croft’s ‘hashtag –portraitsfornhsheroes‘ idea, I have begun a series of portraits. it was instigated to reward and draw attention to the amazing work of our NHS staff during this terrible pandemic. It’s a brilliant idea and has actually helped me to regain some sort of focus.

This beautiful young midwife was the first of my portraits. Hearing her story has enabled me to put just a little of her personality into what might be a rather stilted image. I much prefer to work in a face to face  situation rather than from a photograph. But it’s not possible. 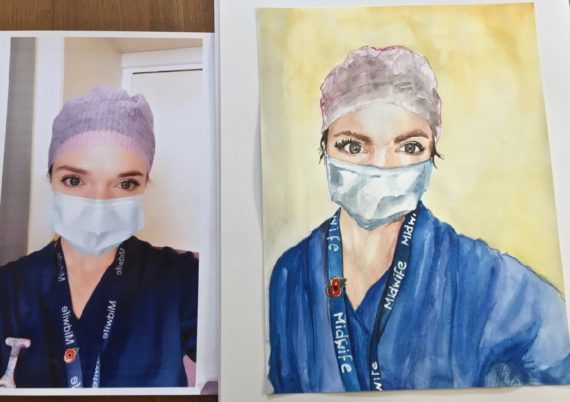 A second candidate  has drawn more ‘likes’ on Instagram than I’ve ever had before. mostly down to the fact that this lady must have many friends, I should think. But I also hope that I managed to capture a little of her devotion to her profession and her obvious dedication to her chosen career. Her humanity shone through like a beacon in the words she wrote to me. 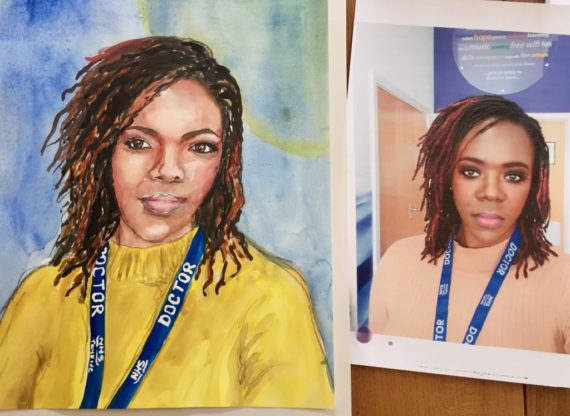 It’s becoming addictive now. I’m already on my 4th and 5th portrait and will advertise for more when these are finished. it’s a wonderful initiative and I urge my fellow-artists to join in. Look for @tomcroftartist on Instagram. 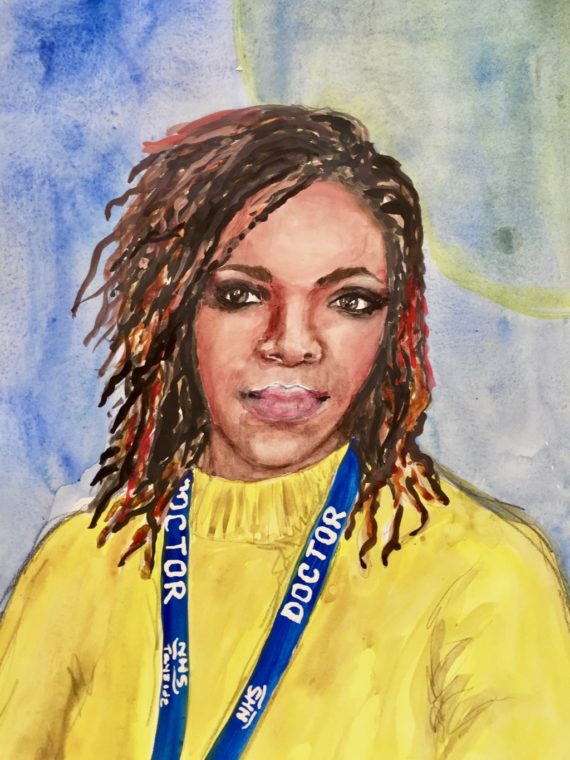 This is Jessie’s finished portrait. Not quite her but would like to paint her in the flesh if possible one day perhaps. In the meantime maybe I should move on from landscapes to people ?

I don’t understand what’s happening to my mind. I hate facebook but am lately drawn to it…to almost anything online which just might shed light on what’s going on??? Facebook and Twitter are upsetting me with the vast amount of negativity, bleating, misinformation. So much is fake news, I’m sure, and the egotistical opinions of so many, are making me angry!! In the face of this absolutely unprecedented situation it would be a miracle if the responses of governments, leaders, countries got it right. But I’m sure they are all doing their best. It’s a logistical nightmare!!! So just everyone SHUT UP and let them get on with it please!!!

Just one fb post did give me hope and a rudder to cling on to. It was about the Maslow’s Hierarchy of Needs. A pyramid diagram depicting human needs in 4 layers. I came across this at college years ago and had forgotten about it. But it’s quite comforting. The writer who sited this on fb explained that we are now on the bottom rung of the pyramid – basic needs of food and shelter. So it’s pointless to berate yourself about not reaching the top layer of Self-actualization; self-fulfilment.

In this current climate our minds just won’t stretch to those giddy heights and we should stop beating ourselves up for not achieving all those things we promised we’d do if we only had the time. We have all the time we need now but simply surviving Stay Home *Protect the NHS * Save Lives  is enough.

So I’m trying now, to stop worrying, stop planning, stop striving to make a valid, grown up thoughtful artistic response and just keep doing random acts of art and kindness. So what if it’s jumbled and full of a retreat into my comfort zone rather than forging forward artistically. I’m making art and that’s as much as I can manage until this awful Biblical Plague ??? passes over…..see below.

A jumble of gut reactions which generally distract me from spiralling down into fear and depression. I’ve been there once before and I don’t want, must not, go there again. 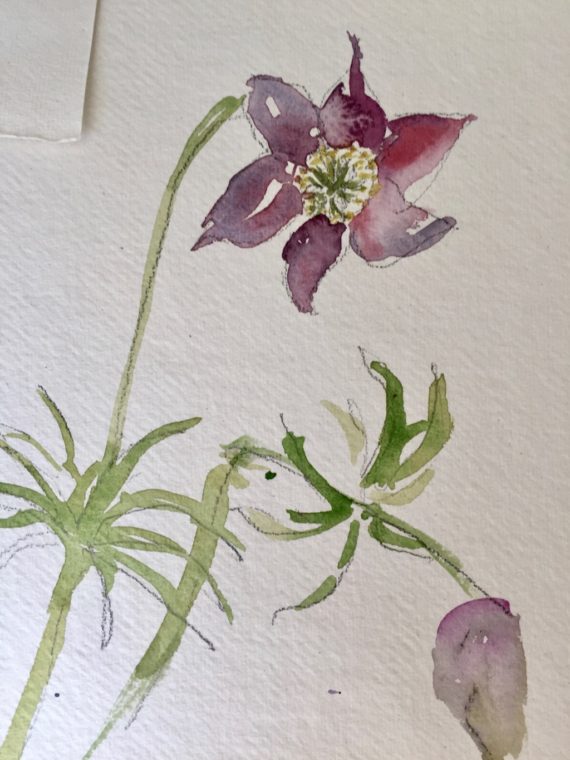 Undiluted time in which to pursue painting.

No constraints such as having to go to work, look after children or even aged parents.Very few demands or obligations in my life to which I have to respond.

In former times I bemoaned the burden of these ties which I felt prevented me from my desire and vocation to create;  follow my dreams of being ‘an artist’.

We humans are subject to such contrary, conflicting emotions.

How  to express this trauma?

A  downward spiral of silence; of empty streets; of empty skies; of empty supermarket shelves; of sleepless nights; of nightmarish dreams coloured by  anxiety….images of the endless repetitive TV news

Then the relief of wonderful heart-stopping images of small acts of generosity, kindness, heroism. The brief balm of clapping in the streets,  surrounded by friends and strangers united in thanks and pride in those who are working to keep humanity going.

My artistic response should be deeper; more meaningful, but instead all I can achieve is a retreat into my comfort zone of looking at, then painting  the sheer beauty  of  flowers . 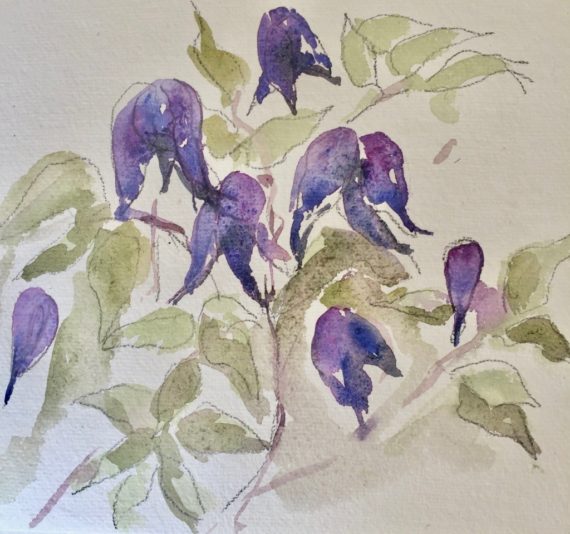 I feel trapped, confined within the four boundaries of my garden. We are having to totally self-isolate. It feels so inadequate. Surely there is something more I could do. If only I was below that ominous number 70 I could volunteer for something.

I lurch between concentration and total absorption of this enjoyable activity and sudden overwhelming despair at thoughts of the future and even of the present.

One day it will become the past.

Until then all we can do is hold on and hope  and perhaps find better ways to express in paint this momentous period of time.