“I’m confident that with the funding applications out of the way, I’ll be able to make a decision about next priorities and get stuck in!” That was the last sentence of my last blog – two and a half weeks […] 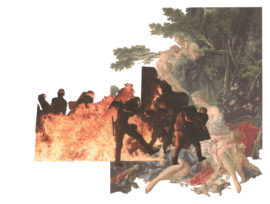 Haven’t done a small collage in a while so here is one making use of some printed marks (yew) on paper from last year. I am feeling really out of sorts with all that is going on in the world. How […]

I think my dad has had all his tests for now. While waiting for him to emerge from his last scan, I started talking to someone in the waiting room who turned out to be a former local journalist (working for a […]

I can’t help thinking that this one is baring its teeth at me. My dad has been in a lot of pain and seeing what he has been going through – “wear and tear pain” according to the doctor – […] 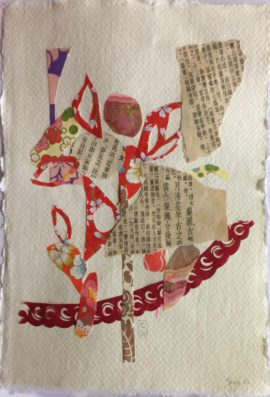 Not quite a collage a day

It might seem a little odd to say, in the middle of a print residency, but, . . well here goes, It feels like painting. These latest pieces are part of a layered series called ‘Reportage’ and are A4 size. […]

Work in progress going well, though late with the blog entry. The series with ‘news stand’ as the working title, is yet to be fully developed, but a first completed run has been made, and pictured here. This set using […]

So now it’s time to sum up something of what I’ve done with my bursary. I have experimented with casting resin into blocks and worked with Meltdowns in Ramsgate to learn some of the technical stuff and done lots of […]

I had hoped to have posted about each of the pieces in the project individually but Christmas socialising, collecting work and struggles with photographic images saw my time just disappear this last week. So I have just put a gallery […]

I finally got back in the studio today after about 6 weeks! It looked very neat and tidy in there but luckily not so tidy that it was intimidating … … and I’d left a piece to finish off, which a […]

Semester one complete and much work done too. And I am not stopping just because I have no access until January. There is sketchbook work I want to do, reflecting on practice, and I can prepare new work stencils etc. […]

The title of And They Will Never Leave Me Behind, 32/50 Collages Before Christmas, relates back to number 26 in the series. It’s really a sketch for a much bigger work and I had been intending to try it out […]

I’m really getting behind on posting about this project – I am not even keeping up with production on Twitter! The main reason is the lack of light and the lack of time. The images are really bad because winter […]

I find it interesting how two ideas can become one. The sprayed and cockled slotted paper was headed for another collage but got hijacked by this. Probably not ready the first time (29/50) is one of my favourites in the […]

Sometimes with collage you can find yourself adding more and more pieces: with this, 28/50 Collages Before Christmas, I found myself cutting smaller and thinner pieces and discarding lots – but they might turn up in another collage coming your way […]

Number 27 of 50 Collages Before Christmas is “It Was Ever Thus (But A Bit Different)“. I suppose it’s from my Tidelines work and has its root in my local Jurassic Coast, especially Charmouth, but these juxtapositions have become continual […]