Walking along the cliffs we wander into a natural chine type feature. In this place we find a small cave!

It was enough to shelter in and dark. Did it go further back than I could see? I was just about to roll into it to see if there was anything in there other than a drinks can, but I thought Cosmo's good at investigating things. I'll sit and watch him.

He did not go in at all, he was too nervous to just brazenly go in come what may. He sniffed at he corners of the entrance. Then he ran off and sniffed all over the vacinity. I thought he's not interested, but he came back went 2 steps further into the cave, gathered another load of sniffs and then ran off exploring the surounding area again. Returning again and again each time he went a little further in and on the forth time he scouted the entire cave.

The information he was getting (or not getting) either, smells outside matched or did'nt match. Connected or not conected was obviously enabling him to get deeper in with more confidence. Apart from the can the only other thing was a circular form natural or man made I was unable to tell. It was of no interest to Cosmo though.

Thought for the day:

'The straight line leads to the downfall of our civilization. It is an uncreative line'. Hundertwasser. 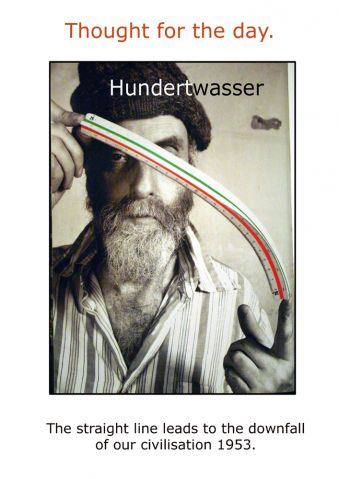