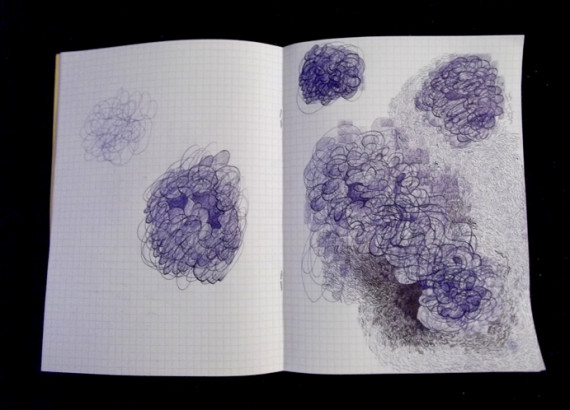 Last month was the third official meeting of the peer mentoring group whereby artists have an opportunity to meet together in each other’s homes and discuss artwork and projects they’re currently working on. On this occasion, we met at my flat and I was one of three artists who had been randomly selected to show my work.

Something that I have been working on for about a year, and was eager to show, were various biro doodling’s and drawings, that evolved out of ideas and images that I was generating whilst still training as an Art Therapist. Although I find myself ritually drawing these forms they evade explanation and typically I struggled to describe what they were to the rest of the group. If I were to chance an explanation, I would probably say that they’re related (loosely) to my interest in archetypes, an idea put forward by Karl Jung.

Jung asserted that within each individual were certain primordial energies which governed all human experiences. He saw these energies as the product of the collective unconscious, defining them as archetypes – structural dispositions affecting human behaviour which are not inherited, but inborn (Franz, 1999: 2). Archetypes remain forever unconscious but find expression in archetypal images which are determined by their interaction with their environment. Jung himself was particularly interested with the mandala, a visual form found in the art of many religious traditions which for him became an expression of the self – an archetypal symbol of wholeness. Oppositely, I feel that my own images are a means of expressing the antagonistic nature of Jung’s psychic structure – a model that the brings together various opposing unconscious drives – see Jung’s Model of the Psyche for more information.

As you can imagine, trying to explain the theoretical origins of these drawings to my peers was difficult, especially seeing as I was unsure about what inspired them myself. These images are difficult to pin down. Though if I were to use any adjective to describe them I would say that they’re ominous. Interestingly, in sharing these images with the rest of the group, someone commented that these drawings reminded them of cloud formations, whilst someone else said they looked embryonic. A lot of these drawings occupy pages in sketchbooks and notebooks though it is uncertain as to whether they grow into anything more than my own abstract ponderings about how the unconscious mind is organised. I do however have a compulsive desire to keep drawing them.