Thought I’d borrow a line from Kate Murdoch’s blog, Keeping it Going. It pretty much sums up my creative output since the beginning of the year which has has almost come to a grinding halt. In an effort to gain some much needed momentum I thought I’d recommit myself to the blog as it’s always been a useful means to gather my thoughts and ideas and engage with other A-N users/ artists who are a continual source of encouragement. 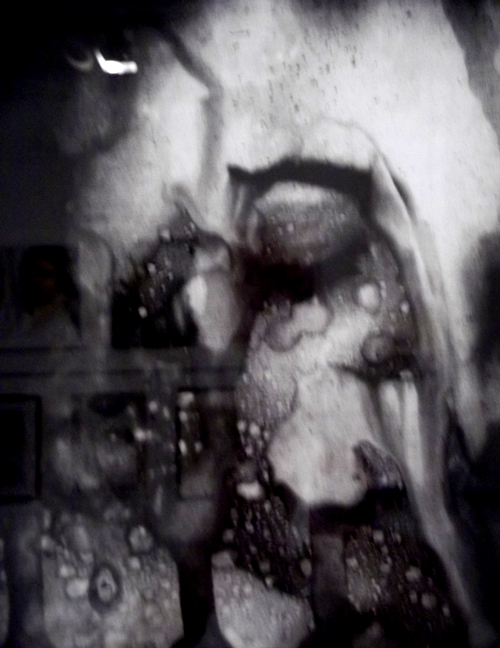 This week I forced myself to write a blog post, if only to say that I had! It just so happened that Candid Arts Trust are currently hosting a Portrait Exhibition from now until this weekend so I hiked it up to Angel to go see it. I thought this would be a good opportunity to reignite my interest in the theme of self/ selfhood and identity, even if my own focus was on self-portraiture as opposed to portraits of other people. The exhibition was nonetheless useful in thinking about the sheer number of artists who engage with portraiture in one way or another. Most artworks on show were 2D and a mixture of figurative and abstract responses to the theme. I was especially interested in a work by Adam Hogarth, called The Great Wave of Kanagawa because it had a particular aesthetic sensibility – a cropped black-and-white image of a face that had been distorted in some way, which I felt loosely resembled my own work (see Wringer). The work was a photo etching, a process I was unfamiliar with, but involves the act or process of making designs or pictures on a metal plate, glass, etc., by the corrosive action of an acid instead of by a burin.

http://www.dw.com/en/robot-art-machines-that-paint-portraits/av-37274353
Something else that has caught my attention was video that I discovered via Facebook of a series of robots that are programmed to draw human portraits in different ways. Well worth a watch if you haven’t already seen it.
1 Comment