1 Comment
https://youtu.be/_e-p5M0vhZI
In addition to my video Self, I’m also working on a large scale wall drawing which draws on the images I’ve been taking of myself and is made up of hundreds of post-its. In order to make this work I applied a grid to the source image so that each individual post-it corresponds with a square in the grid (see below). The rationale for this was to scale-up my image easily, but also to make me systemically study my own face –  to really see myself.  It’s a work in progress and I’m yet to assemble the post-its to form my collective image. 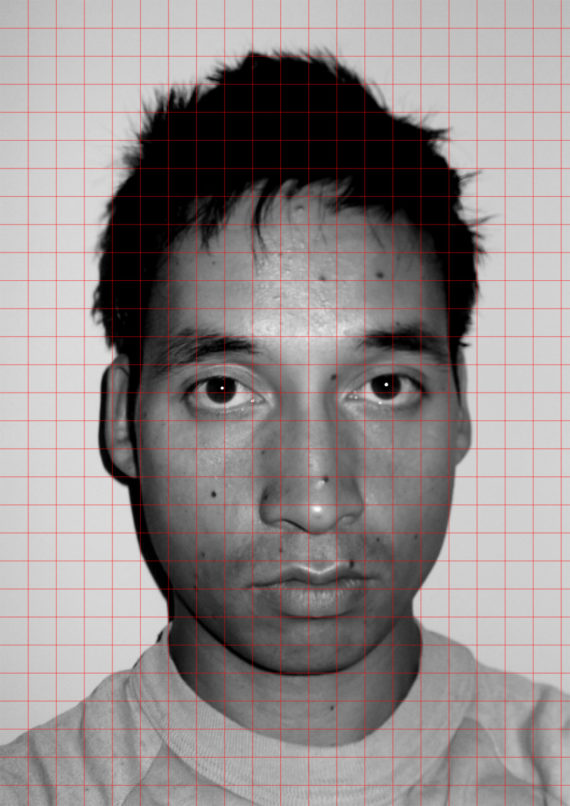 In thinking about other artists who employ grids to construct portraits, I started to think about the work of American artist, Chuck Close. Close has received international recognition for his large scale portraits and has been instrumental in reviving the art of portraiture as a credible subject matter. His signature style of portraiture has recently featured as the cover art for Paul Simon’s latest album – Stranger to Stranger, released in June of this year.

Close’s own rationale for using grids to construct his paintings is as much pragmatic as it is stylistic. He is affected by a condition known as Prosopagnosia – a psychological condition which impairs ones ability to recognise faces in a normal human way. In 1988, the artist also sustained a spinal injury that left him largely paralyzed.  In time, he regained movement in his hands and arms although he would wear a splint that would enable him to hold the paintbrush whilst using a mechanical easel in order to rotate the canvas (Art Factory, 2016). Whilst some critics may read these grid paintings as prescriptive in their construction, I myself have a lot of admiration for these works. Apart from his physical limitations,  there is something truly innovative about Close’s appropriation of the grid. Each square seems so abstract in isolation; a myriad of spiralling colours, that suddenly form a unified image when one views the work from a distance. In this way, his work allows for multiple readings.

Close has often acknowledged that applying the grid to his paintings prevents him being overwhelmed by the whole (San Francisco Museum of Modern Art, 2012), a statement that perhaps validates my own use of a grid to draw my portrait. After all,  knowing where to begin when making an artwork can be difficult at the best of times. How much more so when drawing one’s own face? Equally, I wonder how my personal feelings and insecurities about the way that I look might inform how I draw myself. Maybe using a grid will enable me to draw myself in a more objective way.

In generating an image from post-it notes, I also like the idea that the final self-portrait will be obscured until all the individual parts are assembled together like a jigsaw.  I have no idea what my completed self-portrait will look like; therein lies the motivation to push on. Within this process, I feel that there are also parallels to therapy – a broad notion of the ‘self’ being revealed over a period of time and under a certain degree of scrutiny. Close himself states he works very closely to his paintings, immersed in the detail of each square and actively chooses not to step back and survey how they fit together until the painting is finished (Nemser, 1970). Whether it’s a success or a failure, I’m looking forward to my own big reveal.

Having missed the last meeting back in May, it was great to meet with the rest of the group and to have the opportunity to share new work. Meeting with a group of such proactive artists always leaves me encouraged to create rather than deflated by my own perceived idleness. Four artists attended the meeting: myself, Julie Turner, Sarah Arriagada and Anna Sikorska.

Last year, I presented an image to the group that I’d given the working title of ‘Self’, a composite image made up of 100 individuals of my own self portrait that I’d resized and recoloured in Photoshop and laboriously layered one on top of the other. The image had also featured in this blog though I had struggled to know what to do with it. In recent months, I’ve found myself revisiting the image and reflecting upon my reasons for making it.

Themes of self and identity have been well-excavated within the visual arts, namely in the art of portraiture. The dictionary definition of a portrait is a painting, drawing, photograph or engraving of a person, especially one depicting only the face or head and shoulders; a representation or impression of someone (Oxford University Press, 2016). In this way, a portrait claims to present a person’s appearance as well as their character. Although, whilst someone’s clothes, facial features, posture may contribute to a certain perception of that person, can they tell us anything about their true identity?

Whilst visiting the Courtauld Gallery recently, I was struck by an artwork that seemed to sum up this disconnect between one’s self-image and their identity. Susan Hiller’s Midnight, Baker Street (1983) shows a series of three self-portraits taken in a photo booth at midnight – a liminal time between wakefulness and sleep, dream and reality (Leach & Fray-Smith, 2016). The images are presented as enlarged portraits, overlaid with scrawled notes (automatic writing) that is rooted in the unconscious mind. Hiller therefore is questioning how and whether a subject’s true identity can be visually presented (2016).

Raising these ideas within the group, and showing the video of Self, we started to speculate on the limits of the self-portrait with a particular emphasis on photographic images. One idea under discussion was the potential for misrepresentation when having one’s photograph taken. For instance, photographs are static images, whereas we are animated and constantly changing, both in terms of our external appearance – the inevitable effects of aging, and in other underlying ways which may not be detected under the scrutiny of a camera’s lens. A reference was also made to head shots and the need to depict everything about one self in a small selection of images, perhaps even at the expense of other images which then become cast off or rejected. As Julie pointed out, taking an image of oneself can be quite ‘trapping’ as we may not feel that the resulting image is an adequate representation of who we are whilst we also don’t have any control over how the image will be received by others. Sarah also highlighted the importance of one’s gaze when taking a picture, which got me to think about my relationship with the camera when I was involved in this process. I explained that I often have a mirror set behind the camera’s view finder so I can change the angle of the camera or alter the tilt of my head and shoulders. The process is sort of an everyday ritual for me now; I’m often looking at my reflection in the viewfinder or the mirror rather than the camera itself. There isn’t really any emotional investment which perhaps comes across in my blank expression.

Encouragingly, the video footage I generated for Self was well received by the rest of the group. Anna S, drew my attention to the term ‘palimpsest’, which means something reused or altered but still bearing visible traces of its earlier form. Showing the video also provided a springboard to talk about other interests related to this work. Most notably, the countless number of videos online which employ time-lapse photography to show changes in one’s personal appearance over a matter of months or years. These range from pregnancy videos or videos of people growing up or ageing to even more visceral variations showing people recovering from wounds, facial scars or surgical operations. Over the last few weeks I have become personally intrigued by these videos and the motivations for them being made in the first place. These videos, as well as my own, have a transient quality, which also point to the fleetingness of life itself (particularly in videos that depict the ageing process). Funnily, these ideas were picked up in the group with reference my own position as a father now, and the way that has altered my perception of my own mortality, both in terms of how I’ll be remembered and what I’ll leave behind. I’m also left wondering what has motivated to make my own variation of the time-lapse video and who is it for.