For a while now, I have been working on a video piece inspired by my interest in the artist’s self portrait. After several months of playing with the footage, and several re-edits, it’s finally finished.

In Being Here (Now), I explore notions of identity drawing direct influence from Gustave Courbet’s, A Desperate Man – a painting that presents a cropped close-up of the artist with bulging eyes and hands clasping at his own head. Courbet’s image epitomises the Romantic era of the eighteenth century in which it was commonly believed that paintings could convey more than a person’s wealth and social standing, but the subjective life of the soul itself. 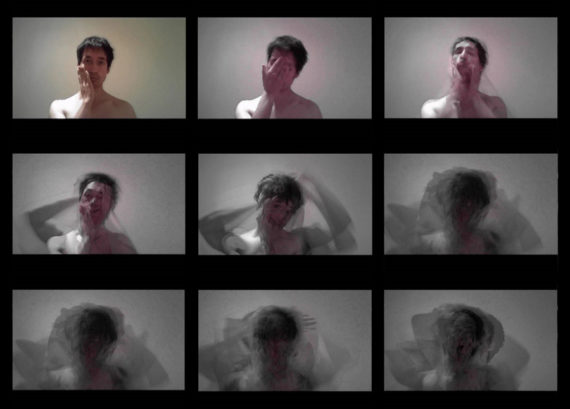 In contrast, Being Here (Now) playfully examines the fluidity of identity at a time when increasing social pluralism, cosmetic surgery and the fast-changing world of social media mean deciphering questions like ‘Who am I?’ is more difficult than ever (Harrison, 2016: 1). Within the video, I present myself intimately touching my own head and face – feeling my way around ears, nose lips, before these rituals become progressively more visceral and discomforting. The video footage itself also starts to breakdown as scenes are cut and spliced together and built up in layers. The multiplicity of different images, all playing simultaneously, thus renders my face and body virtually unrecognisable.