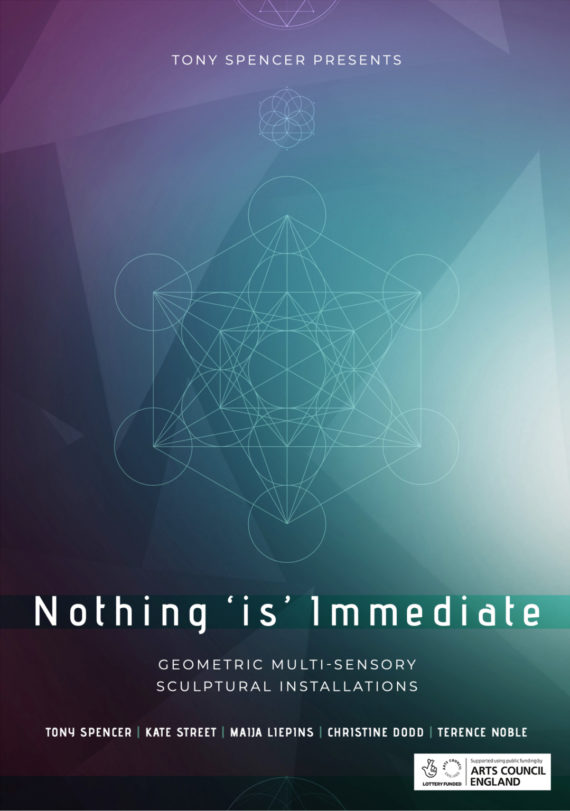 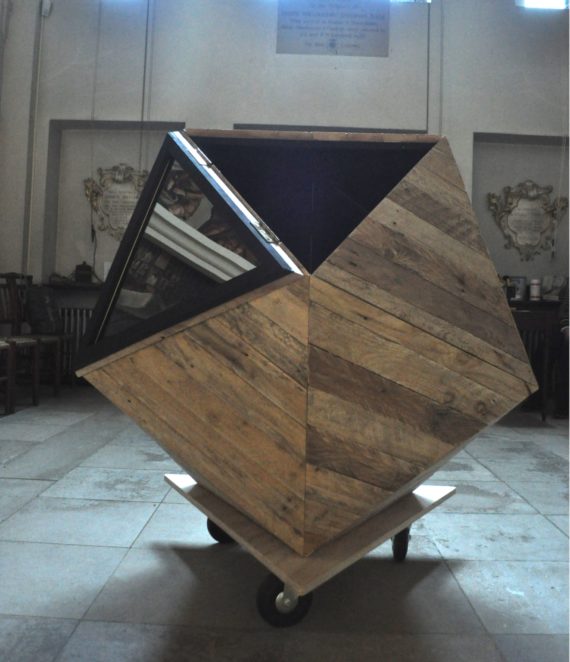 The second in the series of Geometric sculptures, the Icosahedron, made it’s first appearance at National Trust property Sandham Memorial Chapel this March 2020, in a group exhibition of contemporary art by CAS Artists called Saturated Space.

In platonism and Sanskrit the Icosahedron represents the element Water. It was therefore a fitting tribute to the paintings of Stanely Spencer, depicted in the repetitive cleansing and the solace he found in a safe space lying between two bath tubs.

Visitors at the opening night on 11 March 2020 were able to experience an live performance by sound artists Tony Spencer and Samantha Britton (both trained sound therapists) while the orange-gowned bodies of artists’ Maija Liepins and Christine Dodd weaved and crawled, and flowed around one another and through the space, providing a unique site-specific experience, memorable for audiences of the night. 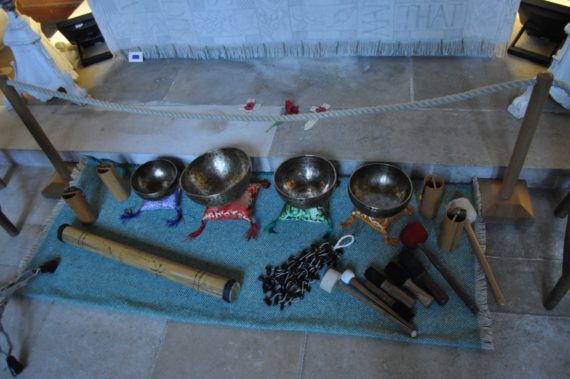 After the show in the chapel, the sculpture was installed in the adjacent exhibition complete with a pre-recorded soundscape. Tony Spencer’s sound-installation ‘Nothing Will Disturb Me’ responded to the Chapel’s function as a place for experiencing healing. Within the work there is a contemplative space. 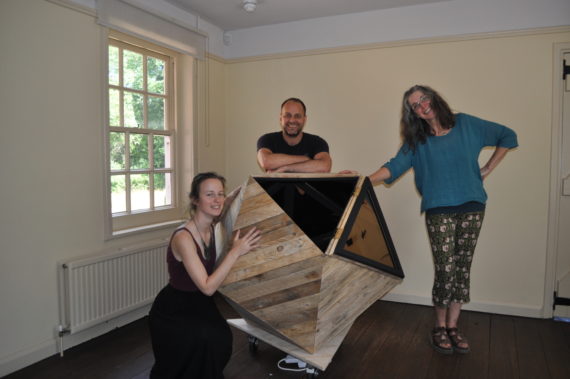 The geometric structure, made from reclaimed pallet wood is the second in a 5 part series of sacred geometric shapes which will be revealed at shows taking place throughout Hampshire as part of Tony’s collaborative research and development project Nothing ‘Is’ Immediate, funded by Arts Council England Project Grants. As each artist responds to Tony’s artworks, they will collectively journey through the elements which correspond with the five platonic solids. You can follow our process on Spencers blog throughout 2020. www.tony-spencer.com/blog @tonyspencerarts #nothingisimmediate

This blog was written by Maija Liepins for #NothingIsImmediateNothiong 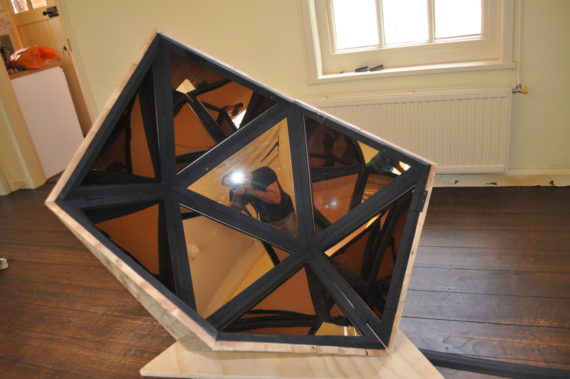 I’m interested in the notion of Nothing, and what nothing is? I imagine that when I look into darkness or pure black, the absence of light is the boundary of the universe, creating a memory of what it was like before Being.

My way of explore this within my art practice is to use materials such as mirrors to create infinite Being and Black 2.0 paint to create the illusion of Nothing.

The infinite reflections of light within a mirrored Icosahedron becomes Nothing. The contained Black 2.0 painted space within a Cube becomes Nothing. Our presence and the act of letting in light brings with it the conscious sense of Being.

Inspired by Johnny Golding, Professor of Philosophy & Fine Art at RCA, I read the book Science of Logic by Hegel, who describes the notion of Being as the indeterminate immediate, free in relation to essence and equal only to itself. This reflectionless being is being as it is in fact nothing, and neither more nor less than nothing.

Nothing is simply equality with itself, complete emptiness, absence of all determination and content. In so far as intuiting or thinking can be mentioned here, it counts as a distinction whether something or nothing is intuited or thought.

To intuit or think nothing has, therefore, a meaning; both are distinguished and thus nothing is (exists) in our intuiting or thinking; or rather it is empty intuition and thought itself, and the same empty intuition or thought as being.

Being and Nothing are distinct yet inseparable, passing over each other so that each immediately vanishes onto its opposite. Their truth is therefore becoming a difference which has equally immediately resolved itself.

This triadic development can be summarised as: Being + Nothing = Becoming

The title of my new art project Nothing is Immediate can be broken down into Nothing and Being are the same and equate to Becoming. Jean-Paul Sartre contends that nothingness relates to free consciousness and spontaneity. The ‘is’ relates to the limit and Immediate is now, the present now in space, time and geography.

Therefore, the translation is Free consciousness and spontaneity happens in the present moment, it is limited to now. 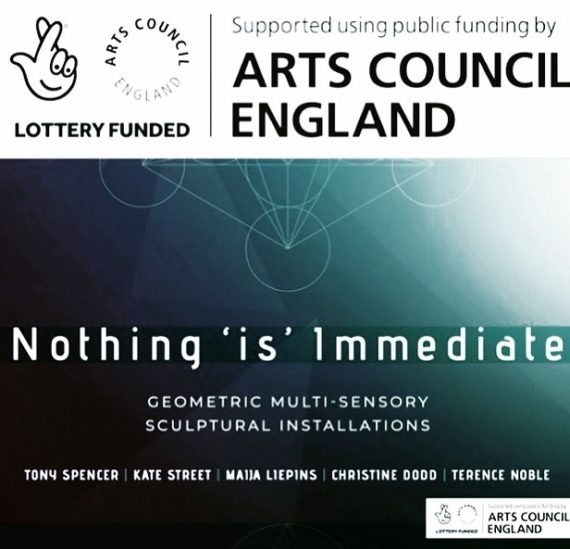 Exciting news in January 2020 to hear that I was awarded an Arts Council England Project Grant to present: No Thing is Immediate Geometric Sculptural Installations throughout 2020.

The project is intended for people with neurodivergent disabilities including dyslexia, autism and ADHD, providing an opportunity to engage with art in a gallery through a combined sense of sight, touch and sound.

The project includes five sculptures based on the geometric platonic solids, constructed from reclaimed pallet wood. Each sculpture, about 90cm in diameter incorporates therapeutic sound frequencies connected to its geometry, which make the object vibrate, giving it an agency. They all have accessible interior spaces that manipulate light and create visual-illusions of finite darkness, infinite reflection, colour etc).

“We are thrilled to support No Thing ‘is’ Immediate through our National Lottery Project Grants funding programme. At the Arts Council we believe that arts and culture has a positive impact on wellbeing, and this project achieves that through a unique combination of sculpture, light and sound. Through his innovative approach to inclusivity, artist Tony Spencer will enable more people to experience the great benefits that cultural activity can bring.”

The work will be presented in 2020 at galleries located within a 30 mile radius of Winchester, UK. To explore the wider theme I am collaborating with artists Maija Liepins, Christine Dodd, Kate Street and Terence Noble.