An independent project space in the freedom of the Norfolk countryside. www.queenofhungary.co.uk

Artists can use the space to test ideas, experiment with new work, document installations and showcase their practice.

The Queen of Hungary started as an artist-led gallery in a medieval building in Norwich, 2001.

We have our last event tomorrow for the Topography Disarranged exhibition. Judith Stewart, who wrote the show essay, will be In-Conversation with myself and Stephanie Douet at 7pm. She’ll be holding forth on her personal perspective on landscape, dislocation and place. We’re aiming for an informal conversation with erudite, lively, input from the audience and some of the participating artists.

I’ve heard there is prosecco and the Queen’s Hungarian biscuits on offer. 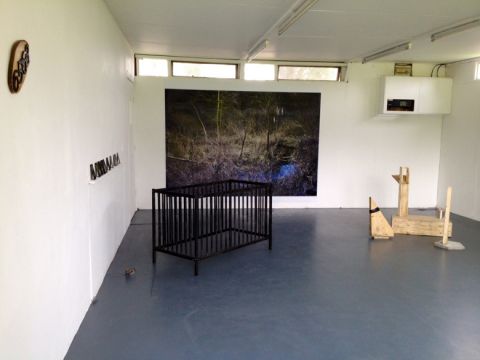 Topography Disarranged opened last night and what a fantastic turn out. Good company, warm wine, great artwork, sunny, mellow evening light and horses in the field. Thanks to Chloe for letting us spruce up her studio as a second Project Space and to Stephanie for all her hard work alongside. Thanks also to the artists, who produced work in such a variey of materials that just fits so well together.

No pause for breathe as tonight we have the Moving Image Screening at 7pm – a great opportunity for last minute technical melt-down.

Topography Disarranged opens tonight at 6pm. Naturally, despite months of careful planning and incremental, timetabled actions, we’ve had several days of frantic wall/floor painting, technical video and audio hiccups and finally work hanging. The first of the two rooms was pretty much complete last week, but we were unable to have access to the second space until Tuesday afternoon. Hot work in this warm weather. Thank you to artists Polly Cruse and Tim Simmons (who is in the show) for lending a helping hand.

We’re installing the work for Topography Disarranged and had quite a bit of fun unpacking and insatlling Keef Winter’s sculpture. With the help of some photos and deciphering Keef’s notations and drill holes on the work itself we managed a fair approximation of the example in the photos. Better instructions than a D.I.Y flat-pack home assembly kit for furniture. Just a few twizzles and tweaks. Hoping it won’t stick to the very recently re-painted floor.

Michaela Nettell is showing a video, ‘Garden’, as part of our moving image screening on the 23rd May. It is a beautiful work that sits perfectly within our rural setting on the edge of a small market town. It reminds me of sitting on the Project Space verandah on a damp Spring morning looking out over the Scout’s makeshift garden, listening to the crows, the horses and the digging machines.

Garden is an experimental video produced during a twelve-month residency at Culpeper Community Garden in London. Pairs of 35mm slides are projected, overlaid and re-photographed to create double exposure effects. These photos are then sequenced to create illusions of movement.
The work describes a private experience of the public space of an urban garden, considering the balance between sociality and solitude in a site that is both collectively shared and a haven to pause and reflect. The process of layering and re-capturing the projections, zooming in and scrutinising small details within the frame, defamiliarises the environment to reveal strange and ambiguous image-worlds and establish a new, personal sense of place.
The audio is fabricated from SoundField recordings captured in the garden and neighbouring locations. Guided by duration, flicker and time passing in the image, the interleaved sounds reflect the process of double exposure and compose distances between the photographer’s lens and the bustling city around. 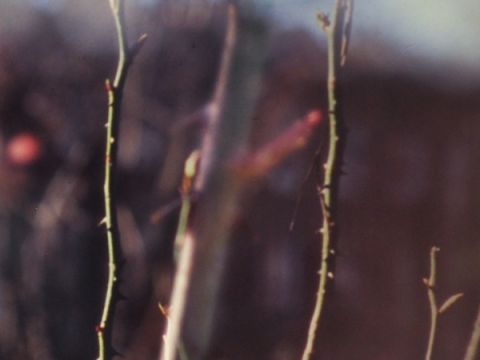