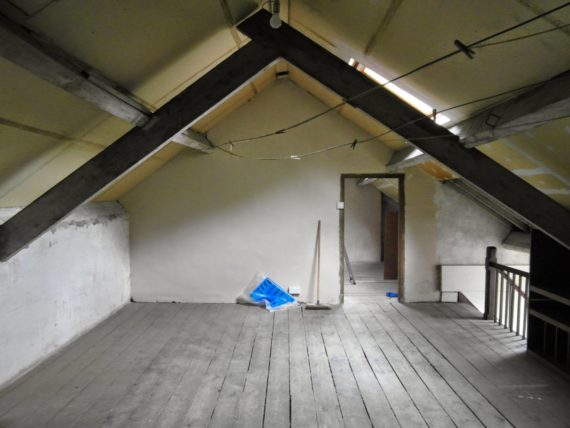 This last week at Stiwdio Maelor will from a basis of collecting further surface castings in Corris; these will form a series of development and research for a new body of work. Since beginning this residency my work has developed quickly but this could be due to the nature of time spent in the studio space. Having a large space and rural environment to work in; ideas, material experimentation and future project concepts have become apparent in my current series exploring Corris. The work appears to have matured, I’ve began to play with the space, the layout of works and how I can transfer these into a gallery environment. I cannot emphasize enough how this Stiwdio Maelor is playing an essential part in Wales’ arts scene and development; the residency programme houses studios for local and visiting artists’ and therefore has developed a dialogue to exchange ideas, share knowledge and make friendships. I’ve taken full advantage of having the attic studio; the space to experiment and investigate various materials, playing with the layout and creating temporary installation works.

Thinking about the slate industry, especially around North Wales led me to develop a new body of work; a repetition of slate castings in wax. Slate is formed when mud with high levels of clay was compacted and squeezed at high temperature during continental shifts some 300-400 million years ago. Depending on the specific content and age of the slate, it is assigned grades of quality, and the seams of slate around Wales are some of the highest quality in the world. It was at the end of the 18th century; however, that demand for the material exploded, changing the look and life of North West Wales. Therefore the decision to cast multiples in wax was due to a material transformation; the qualities of wax, soft/hard, malleable, the idea of loss; its form, purpose and placement in today’s ‘society’ or everyday surroundings. 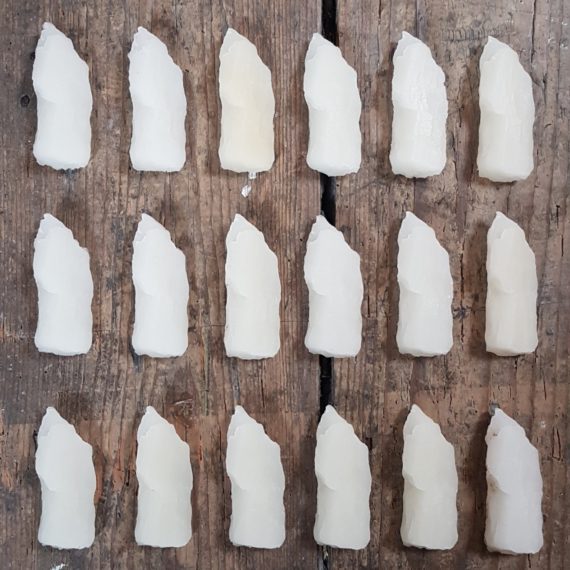 The ongoing growth of the temporary installation, Earth Series forms a basis of presenting an initial response to my current environment; the seven piles of earth (soil) are an example of organic elements explored within an urban context (space). The series has been documented regularly showing the ‘transformation’ and journey of growth protruding from the soil cavity; I foresee the work as a developmental opportunity for future projects and new works.

The artist Mona Hatoum is well known for her large-scale installations and sculptures which challenge the formal languages of Minimalism and Surrealism to expose a world characterised by conflicts and contradictions. Her piece Present Tense, 1996 comprised of 2,200 bars of Nablus soap (for the map’s dimensions to be suitable for the gallery floor) and tiny red glass beads pushed into the surface of the ivory-white soap bars. There was a superimposed grid over the map to facilitate the tracing of the boundary lines of the scattered and disconnected territories into which the Palestinians had been pushed by the Oslo agreement. 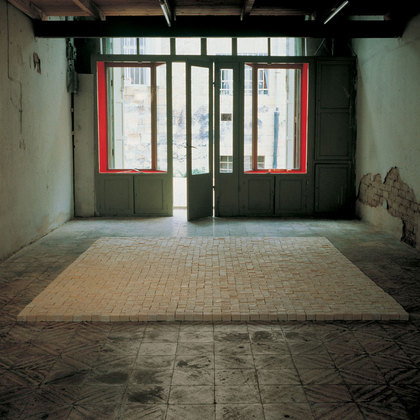 I’m curious to further explore site-specific work, engaging with materials that are linked to the space or environment in which you are inhabiting. I’ve found my current work and the experimental approach to this residency period has influenced my interest in future exploration of welsh culture and industry; to engage with my environment with an inherent intensity.

The works during this residency have developed into a ‘series’ based on Corris and has therefore become a site-specific development of a new body of work. I’ve began to investigate spatial relationships between the organic and industry; using casting processes associated with traditional sculpture practice I’ve began to create a collection of casts in response to my environment and findings. After spending a large amount of time in my studio space at Maelor I began to discover unusual floor markings; and therefore using alginate taking direct castings of the surface in wax. Thinking of my environment and the welsh industry I foresee these initial castings as a development of a series of floor works; using an industrial material such as iron will involve a transformation of material. Iron has become a sparse material and a rarity to use in casting processes today; it’s hard yet brittle properties will form the basis of taking elements from welsh surfaces (grounds) and transforming them into cast iron works. 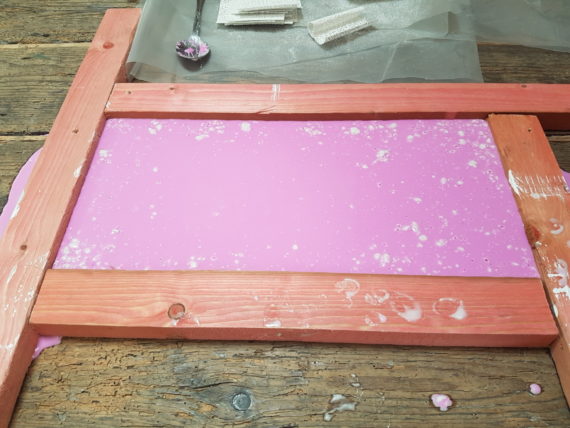 (Alginate mould process – taking a direct casting of the surface)

The Boyle Family’s Earth Studies are three-dimensional casts of the surface; recordings and documentation of random sites. The works combine real material from the site (stones, dust, twigs etc.) with paint and resins, therefore preserving the form of the ground and creating new interpretations of the environment; combining a powerful, conceptual framework with a strong and haunting physical and visual presence. The works bring into the focus the ‘human’ element and experience for the viewer gazing at large sculptural casts mounted on the walls of a gallery; and therefore emphasizing the scale of our everyday surroundings and environment(s).

The artist Cornelia Parker explores the potential of materials, focusing on their simplicity, the deconstruction and reconstruction of domestic, everyday spaces transformed into sculptural installations; therefore taking the environment into a gallery space. A previous work, a floor cast; Parker had often played ‘don’t step on the lines’ or Hopscotch while walking her daughter to school on a route that took them through the graveyard. These games rekindled an obsession with pavement cracks that had lain dormant since the artist’s own childhood. By pouring liquid cold-cure rubber into some of the gaps and letting it set, Parker was able to lift up this part the geography of the city that had been mapped out in stone many years before. The captured rubber cracks were upturned and then cast in black bronze. Placed on steel pins, they appear to hover just above the floor, creating an obstacle in the form of a petrified line drawing. 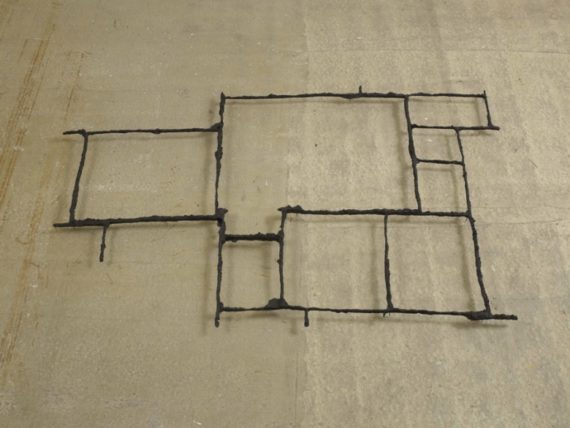 After a recent visit to Berlin, I had the opportunity to see works by Joseph Beuys Das Kapital Raum 1970 – 1977 at the Hamburger Bahnhof – Museum fur Gegenwart including his film and performance works as video documentation and the impressive and extreme sculptural work Tallow.

“The most important thing to me is that people, by virtue of their products, have experience of how they can contribute to the whole and not only produce articles but become a sculptor or architect of the whole social organism. The future social order will take its shape from compatibility with the theoretical principles of art.”
Joseph Beuys 1973

His aim was to question the underlying motives behind the urban planning which produces concrete deserts, and standards, therefore, the site he choose was the worst possible. An exact cast of a dead corner under an access ramp, transformed into a positive form: sculpture. Twenty tons of mutton fat granules, mixed with a few drums of beef fat for extra firmness were melted down and poured into reinforced plywood mould. Beuys: This is the first sculpture that will never get cold, and if it gets cold it will never get warm again. Beuys’ practice aesthetic was based on two states of chaos/order and undetermined/determined; his use of fat and felt as primal materials with an organic presence maintain this connotation of regenerative life, therefore are giving warmth.

The idea of material reality in his practice was an evident aesthetic of importance; Beuys believed that ‘every individual can be the creator of himself/oneself and of one’s environment.’ What was of pure fascination during the exhibition was the depth and range of works that comprised of four domains; exploring the concepts of humanism, social philosophy and anthroposophy and the idea of social sculpture. Beuys’ philosophical inquiry developed into a new materialism of contemporary theory which posts a speculative re-evaluation of matter.

My use of organic elements in my work led me to further investigate Beuys practice and his aesthetic approach to the fields of sculpture and installation. Previous works have been assembled or created as a temporary form(s) due to the nature and conceptual approach to research and concepts. Most recently my approach to materials continues to involve an organic aesthetic conforming with the imbalance tendencies of their nature that procures an experimental approach to methods in my practice. 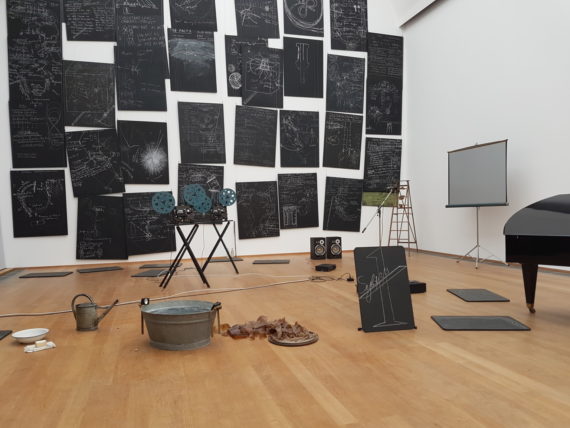