0 Comments
https://youtu.be/ftIJR5s6xaA
https://youtu.be/ftIJR5s6xaA This video is a follow-up to the last one on observational drawing of an old copper pot planted with blue/purple pansies. After the drawing which I finished with  some loose watercolour, I began a large abstract painting. I wanted to discover how important it was to make observational drawings first and how they influence the painting. I quickly realised that the pot held so many memories  for me which rapidly became more important than the flowers which I had anticipated would have been the focus of the painting. Instead the flowers, and indeed all the observational work,  played a subordinate role and the indexical traces took centre stage. I don’t think it’s necessary or desirable to detail the memories it evoked for me but rather to let the viewer interpret the marks for themselves.
0 Comments

I hope I’ve managed to upload a video. It’s part of my MA work and later I’ll add a painting about the video. I’m trying to unravel the interrelationship of drawing and painting and this video is an experiment in connection with this

Paintings getting more experimental after Brisons Veor in Cornwall 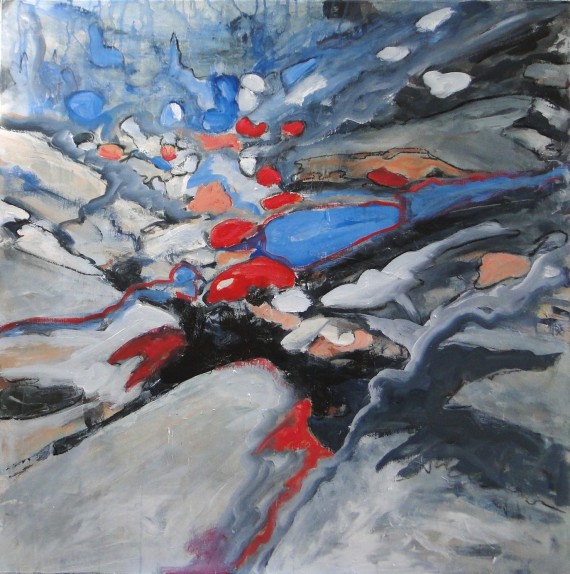 Had an interestingly tutorial today which led to thoughts about these two images. One is of one of the many observational drawings made during the recent residency at Brisons Veor in Cornwall. Impressed by the incredible geology and landscape ….I just didn’t know where to start and wanted to draw everything I saw. I began a painting from this sketch while I was still in Cornwall but on returning home decided that it was too figurative so began to alter the balance of shapes to form a better composition. My memory of the rich iron ore deposits leaching into the granite had to be present. I often use a blue/orange palette and this just felt right here. The top of the painting was too busy and needed a strong light blue element. I realised that sticking to the representational drawing wasn’t working. The drawing was a reasonable starting-point but it’s conversion into paint just didn’t look right. The balance was all wrong. Gradually the painting started to evolve into something else. I’m not sure it’s quite finished yet. The orange flash is now too dominant and needs to take a quieter space within the canvas.

I think it was necessary to make the observational sketch but not to slavishly follow it. The memories of sounds of the waves in the background almost push me to simplify the composition and to instill more light than was actually conveyed by the sketch. The drawing acts as a visual prompt but the painting needs other sensory memories to complete the image.