If you read my blog, you will be familiar with my struggles with the rigors of the MA course I am pursuing. Every now and again I hit on something which makes sense to me and this has been one of those moments. Recent email feedback  from a tutor  shone a light on Tim Inchgold’s writings, in particular this….  ‘We cannot make the future without also thinking it…The theorist does his thinking in his head, and only then applies the forms of thought to the substance of the material world….by contrast (the maker) allows knowledge to grow from the crucible of (his/her) practical and observational engagements with the beings and things around (him/her). This is to practise what I would like to call an art of inquiry.’

No prizes for guessing which camp I fall into! I’ve kind of edited the quote in order to own the words for myself. Clearly I am a maker rather than a thinker when it comes to my art practice. My tutor urged me to look at what my painting does beyond the initial intention.

I think I have been moving towards this. My work needs to express more than representation or narrative. But the next step is to use observations to initiate a connected but new image which is inspired by more than one thought.

These 4 images may appear to be unconnected but actually all feed into a new piece of work. I pinned a large sheet of paper to the wall and began rapid sketches of a generic figure moving through space. These were in my head because of the  remembered poses from observational figure drawing I have been doing recently. They will be superimposed onto a landscape from any one of the areas I have worked on during the previous months when I was concentrating on landscape as a subject.  I’ve been painting abstracted portraits of Kate too and even these might creep into this new work, I suspect. 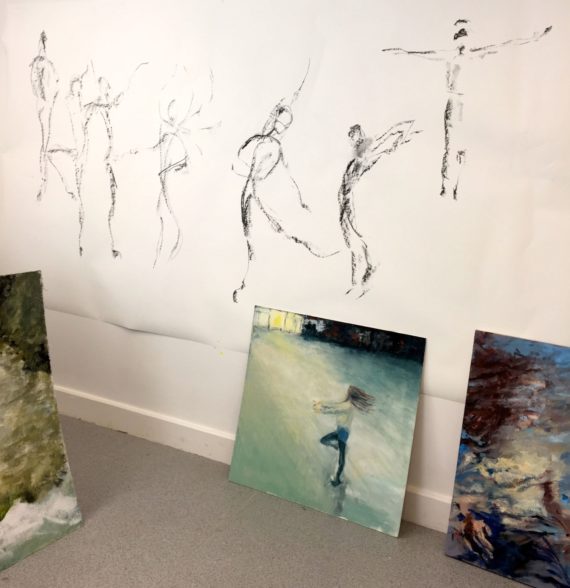 Next I will let the materials take over and see where it leads. It’s in it’s very early stages at the moment. Movement, time and space will all be illicited somehow – not sure how yet. Memory plus feelings plus responding to the materials will all play their part. I think I’m making some progress towards a greater understanding of how my work is moved forward by thinking. How theory and research affect practice.

Trying to focus my work into a sensible, acceptable, believable, academic Research Question on which to hang my current art practice, is an ongoing and largely frustrating task. I’ve dithered about with Landscape, Sense of Place, Time, space and movement, The Phenomenology of Life, as various ‘pegs’ on which to hang the stuff I paint. But nothing quite explains what I’m doing.

I’ve tried a really simplified and uncomplicated description, stating that I paint about ‘Life Itself’ . But that’s a bit of a cop-out. Or is it? Looking into existentialism, (Researching ?  Yaaay!) I found various complicated definitions but the one which most struck a chord with me was this – ‘The philosophy of Existentialism was an influential undercurrent in art that aimed to explore the role of sensory perception, particularly vision, in the thought processes….art is not an exact science but a means of capturing the complexities of what the eye observes.’   It does have to do with 1. phenomenology, 2. ontology and good old-fashioned 3. observational drawing. All of these 3 are built into my DNA and basically what my art practice is about.

Have I hit on the answer perhaps ????

The course I am attending at the Royal Drawing School in London is inspiring me each week with light-bulb moments.  We were asked to draw with our left hand without looking at the paper and without taking the charcoal off the page. Sounds a bit gimmicky, but it produced surprising results and felt very freeing. 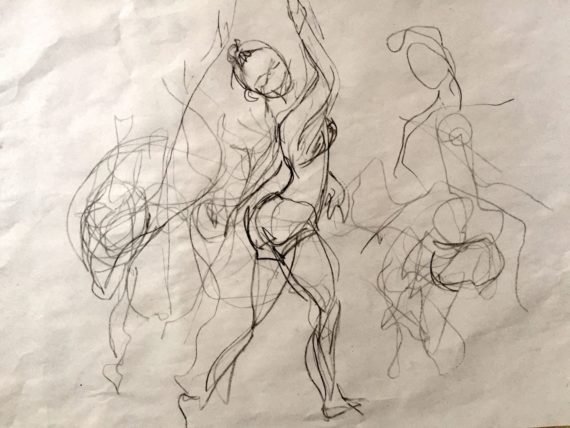 We were allowed to look at the end and to make one image on top of the scrawls.  Next we had to look intently at the model then turn our backs away and draw  from memory. That was interesting in that we were told to trust our memory when drawing rapidly moving figures. Once a memory of the exact shape of the models arms, legs etc. was embedded in our minds through one careful observational drawing, all we needed to observe as the model moved, was the relative positions of each part and then fill in the detail from memory. I realise I have been slavishly believing that pure observation is the key to drawing but it’s not the whole story. Drawing movement is difficult but learning various techniques has helped and almost wiped out my ability to draw a static pose.

At my local life class  I found it hard to draw poses which lasted more than 10 minutes. I found movement and speed of recording  the rapid poses much easier. 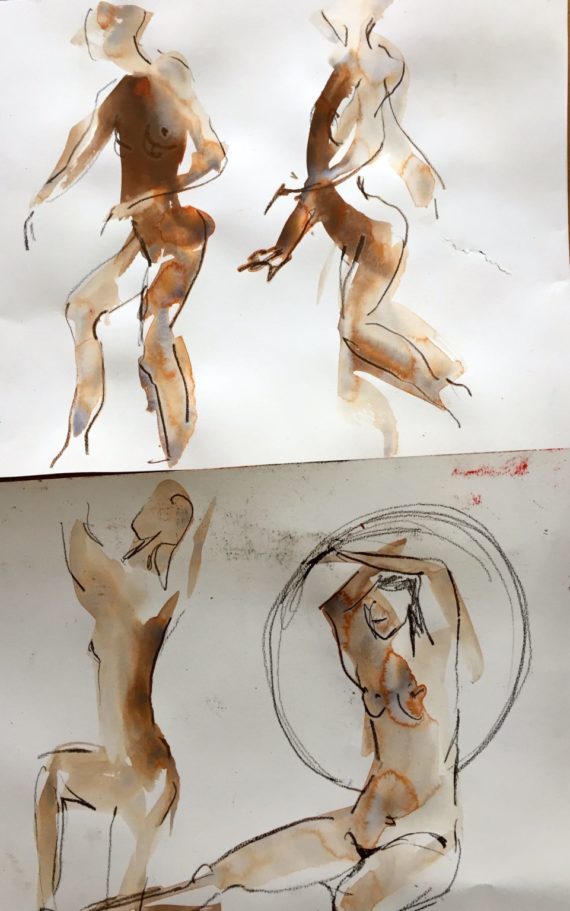 The London course introduced me to ,  the drawings of Victor Passmore, Peter Lanyon, Medley and Hilton. These artists were contemporaies and their drawings were concerned with the extremes of both figuration and abstraction  ‘Without these two poles – the idea,implacable, thorny, remote and the medium, fleshy, lecherous and lurid – and without the battle between them and the final sinking of each sovereignty in a common wholeness, there can be no art’  These words were written by Hilton and quoted in a catalogue to describe Medley’s work.

I think this gets close to describing the general direction in which I am currently heading. My long battle to place my work within a framework of either abstract or figurative seems less important than the concern to let an image express something more relevant. I used to worry about choosing a subject but  now that too seems irrelevant. All art is basically about life and the subjects just evolve. I used to propose that my work was centred on landscape but increasingly I find myself painting the human figure, within the landscape. Perhaps that sounds boring but it’s really all there is. Art is a mirror held up to reflect, not record life. We exist in space….end of story.