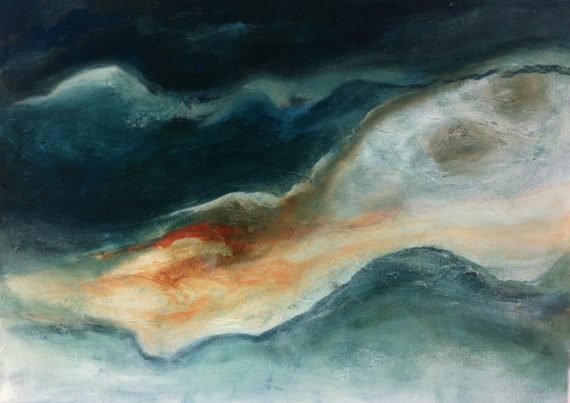 The level of satisfaction with my painting soars and plummets but at the moment I’m cautiously happy with the way things are going. I’ve adopted an attitude of not over-thinking what I’m doing but to just get on with it and enjoy letting the materials lead the way forward.

This is one of a series I’m doing based on Cape Cornwall rocks and beaches. I seem to be stuck on a turquoise and orange palette which reminds me of the colours which dominate in this part of the world. 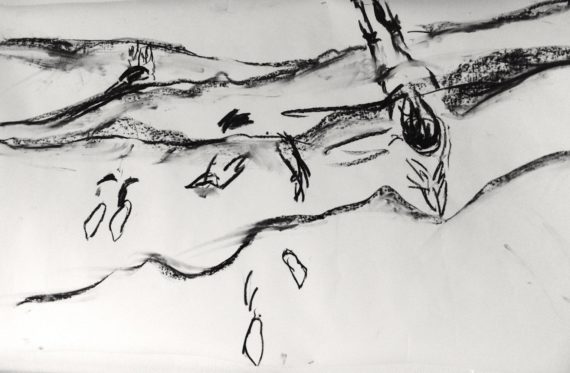 I’m also enjoying messing about with charcoal. This grew out of trying to compose a painting of swimmers which is a favourite subject.

As I said I’m not thinking too deeply about what I’m doing right now. I’ve been to London galleries several times lately and I think I’m letting everything swirl about in my mind and hoping that the cumulative effect of seeing and doing will come together into a more ordered and profound body of work in September when the MA course gets going again…well it’s worth a try ?

After my minor rant about my dislike of Artspeak, I was talking to my daughter and her words have offered me a solution and cheered me up. I was getting quite depressed about my painting. I couldn’t think of a worthy subject which would comply with the final module of my MA study. I felt it needed to be highly original, intellectual, groundbreaking, high-minded or important in some way, and I just couldn’t think of anything which hasn’t been done a million times before. As I said in my last post….everyone seems to be painting about a sense of place, memories or the physicality rather than the representational. I don’t feel I have the mental stamina to cope with such aloof and difficult ideas.

She said to me, after I had agonised and poured out my doubts to her, “Just paint what you see. It was good enough for Monet so it’s good enough for you. Paint Alec (husband) pottering in his workshop. It’s an Aladdins  cave in there….loads of things to paint”. What a Eureka moment.

It instantly reminded me of the Hockney guide  at the RA Portrait Exhibition I saw recently.‘Hockney says he paints ‘what he sees’, acknowledging that we all see differently as our view is shaped by our many experiences. When a sitter asked if Hockney had captured a likeness, he said ‘ I have got an aspect of you’ adding that if he were to do a second portrait he would capture a different aspect and each subsequent portrait would capture a different aspect.

So…. with wise words from Hockney and my daughter I will endeavour to stop agonising about subjects and just ….paint what I see.  Each time I will capture a new element of what I see. And that’s enough I hope. 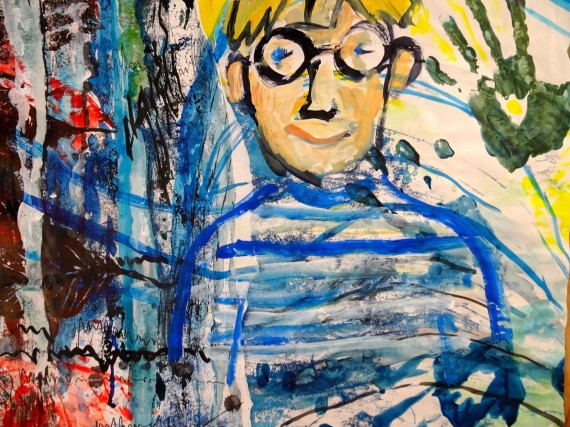 I’m getting so tired of reading the same phrases…sense of place; evoking memories;capturing the feel of the place rather than it’s physical representation ; materiality of the medium ….I could go on but I think you’ll get my drift. It’s all so inevitable and makes me think all artists, including myself, are striving for the same things. To transport the viewer into their own emotions about what they are looking at and trying to paint in an original manner rather than a purely representational or, dare I say it, a traditional style.

So, how do artists write about their work without becoming boring and/or pompous? I’ve long had a dislike of what I call ‘artspeak’. The use of  invented adjectives to bamboozle the public into thinking I’m an intellectual. But I’m not. I’m someone who is in awe of the beauty and constant astonishment of the world around us, and who loves to paint. I couldn’t say precisely why I love to paint….something about the magic of watching the liquid paint swirling around on a surface and becoming something. The feeling you get when it works out well and the challenge to extricate the problems when it doesn’t. It’s an addiction. You think maybe one more dollop of red will solve it. Or if you scrape back to how it was a minute ago it will improve? It’s  a never-ending battle, but one you cannot abandon.

There….not an artspeak word in sight but I think it sort of gives an inkling of what it’s about.

I went to the Summer Exhibition twice this week and revelled in the glorious eclectic mix. I hoped it would give me a clue about how to get selected. But it’s as much a mystery as ever. Here are some of the pieces which I loved and which moved me. Not a single link between them.

A good week. Started with the Symposium of Chinese Art at University of Suffolk….the very first day of the new name and status as Suffolk Uni. Proud to be graduating next year as one of the first cohort.

A stimulating, interesting day too.Then on Tuesday and today (Wednesday) I’ve been painting almost solidly. Started with this one…memories of Cyprus. 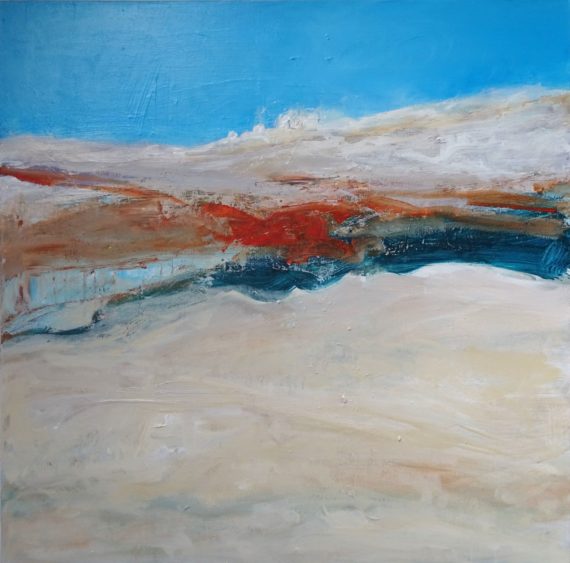 Then, as I’d already made an image of Catterline, I decided to go on with the theme of making images from pure memory of places which mean something to me. Suffolk was an obvious next choice. 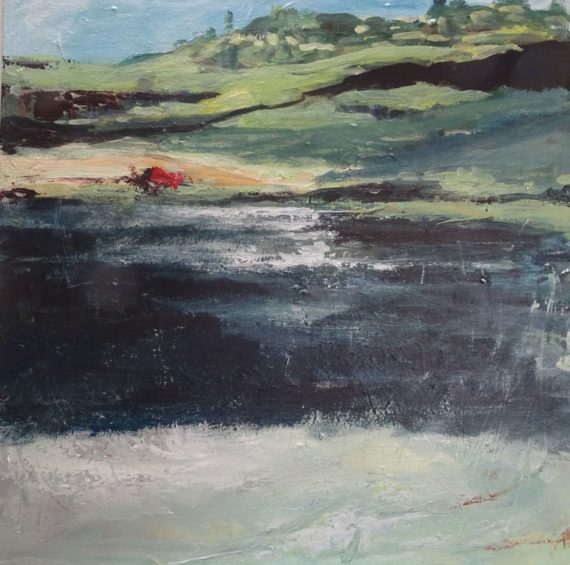 I wasn’t very happy with this. A bit too calm, figurative and yet with no hint of my feelings about the scene. So I started to think back to the Cornwall Residency. This was fresh in my mind as I’ve just been accepted for another week there next year…looking forward to it already. 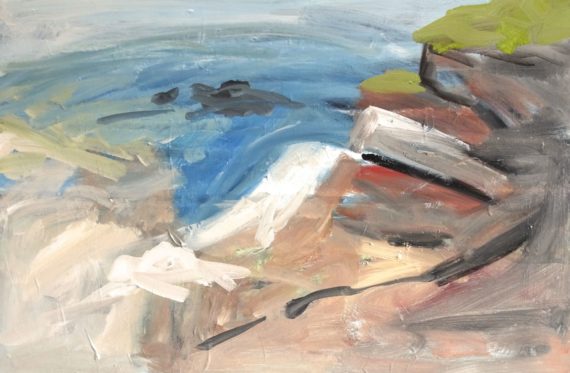 I’ve actually reworked this one several times and it’s still not quite there. Needs time to settle so it’s sitting at the back of the studio for now. Next I saw a large painting of rocks  which hadn’t worked out so I thought I’d rework it. This was better. I used the lines of the original composition but simplified it and used the colours that seemed to pop into my head as representative of the brilliant sea in sunshine. 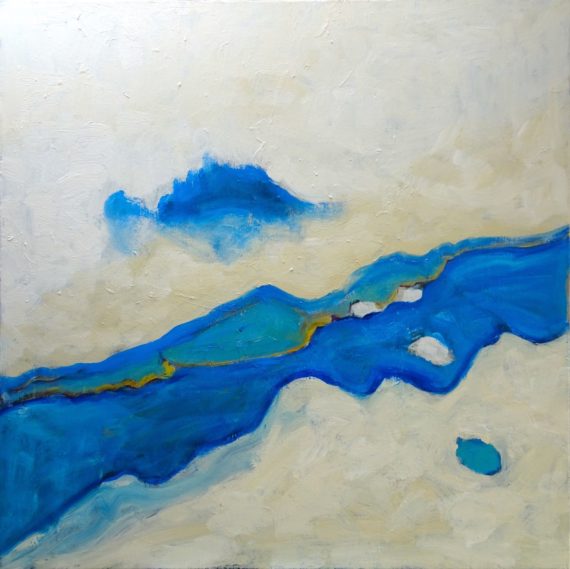 So, it’s been a good week and it’s only Wednesday ! I must now try to reflect on all this using proper art language rather than this garbled diary description….that’s the hard bit.