Today I re-discovered Howard Hodgkin. An interview with Andrew Graham-Dixon , plus several articles convinced me that his view of art speak is very similar to mine. I’m no good at art speak . I’m going to use his words, which are far more expressive than mine to explain what I mean.

‘It’s very difficult to talk about it, (painting) because we talk about it using words, and words don’t come into it when you’re –at least not when I’m painting. I can’t be much help I’m afraid.’

It is really hard to talk about my work. After looking back over the years and especially over the last 6 years, I realize that art, or painting is my language. I neither want to, nor need to talk about it. Another quote about Hodgkin is….

‘Paint is, for him, more eloquent than words. When people ask him what he means by a painting, he’s given to saying: ‘Look! Just look!’ (https://www.theguardian.com/artanddesign/2012/jul/28/howard-hodgkin-saturday-interview

I often feel like saying something similar but usually try to politely explain my work. I can never find the words. When questioned about the subject matter of his work, he says he is ‘a representational painter, but not a painter of appearances’. He paints pictures of emotional situations. This is similar to the thing I try to do – to conjure in paint a memory, a sense of what things were like at a given moment in time, but without actually painting a narrative image. My work is abstracted and ambiguous. I try to represent the senses and feelings; the human consciousness of the subject rather than the visual and figurative elements.

Like Hodgkin, and I’m sure many other painters, each painting has to have a starting-point. Humans always crave meaning. They ask what is it? what’s it about? It’s almost impossible not to seek meaning in everything we see and in life itself. But once I’ve found my reason or meaning I then want to let it go and for the viewer, to impose their own meaning. I don’t want to explain my thoughts when I painted it.

Graham-Dixon asked Hodgkin if he had enough memories left on which to draw or did he feel the need to travel to seek out new experiences? He replied that he had far too many memories left to fulfill and that was the reason for him speeding up his output. As Hodgkin says, when he sells a picture

“It makes room for the next thing, which is very important. And that does come from old age, I suspect. There’s less time, so on one goes”‘ https://www.theguardian.com/artanddesign/2012/jul/28/howard-hodgkin-saturday-

I know I bore my friends by saying -We’re all going to die at some point in the future but as that unknowable point gets closer the urgency to do things increases. Many artists are driven by this need towards the end of their lives and I am no exception. Not only  do I want to paint my memories, I want to travel and make more.

Confusion reigns again ! had my most serious yet attempt at selling my work in Norwich at Art Fair East. A steep, steep learning curve. I sometimes wonder why I’m putting myself through the rigours of an MA in Fine Art….no not really….I’m loving the challenge. But it’s slightly weird in that for most students there’s a purpose – looks good on the CV; a step on the career ladder etc. but ….let’s face it – I’m approaching the end of my life. I don’t need to advance my career. I’m doing this for pure enjoyment and to satisfy my constant craving for knowledge and my addition to painting.

The by-product is that I produce more bits of art than I know what to do with and I’m running out of space to stack the canvases, never mind the acres of life-drawings I produce at the smashing class I started to attend on Monday mornings at home in Sudbury. I go into Ipswich (Suffolk University ) on Thursdays and sometimes other days and I’m starting a 10 week printmaking course at Gainsborough House in January which will produce yet more stuff.

So logically, I have to either ditch some of it or sell it. It’ll all go in a skip when I die but in the meantime it would be quite fun to sell. So I tried the Art Fair.

And guess what….I sold a painting ! This one. 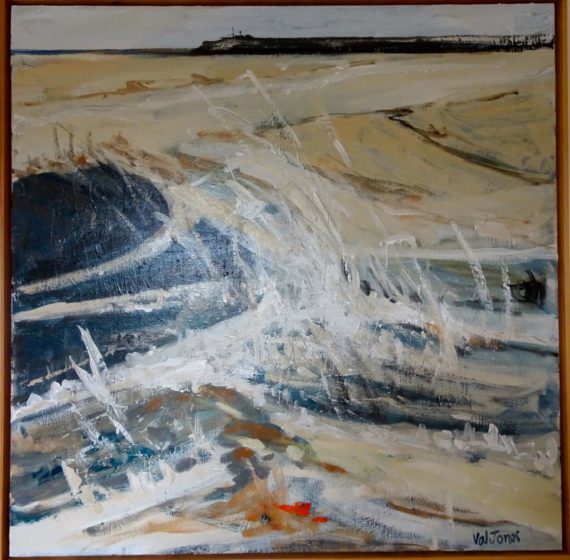 But it wasn’t a painting which fits in with what I’m doing on my MA. So the dilema is do I stay true to my mission to develop my art in an intellectual dimension or do I paint what will sell easily?

I suppose I concentrate on the MA at least for the moment. It’s important to retain integrity through my practice so I think I really do know where I’m going. There, think I’ve answered my question. If it does eventually sell, it’s a bonus. If not, it won’t be my worry if it ends up in the skip after I’m gone.