Here are two very short clips of the work made on this great Residency – one of the most important art experiences I’ve had , as well as being a wonderful week in the sun – so good I’m going back on June 4th for more.

Whilst this might seem a bizarre departure from my latest work on geology, it has sprung from my week in Cyprus and a chance visit to an exhibition in Kolossi Castle to see the work by Lefteris Olympios. He is a Greek artist who follows whatever subject matter catches his attention, often despite advice to the contrary. I was entranced by his multitude of beautiful ink drawings of birds, and on researching his work on my return to the UK became even more intrigued. A stop point on our visit to Nicosia at the supposed birthplace of Aphrodite had attracted my interest and had led to a large painting which I left behind in Cyprus.

I looked at the famous Botticelli version on my return and decided to try a version of my own involving four figures. I had been thinking of returning to the subject of figures and this seemed like a good place to start. I began very figuratively, intending to let the image develop gradually into a more abstract composition. 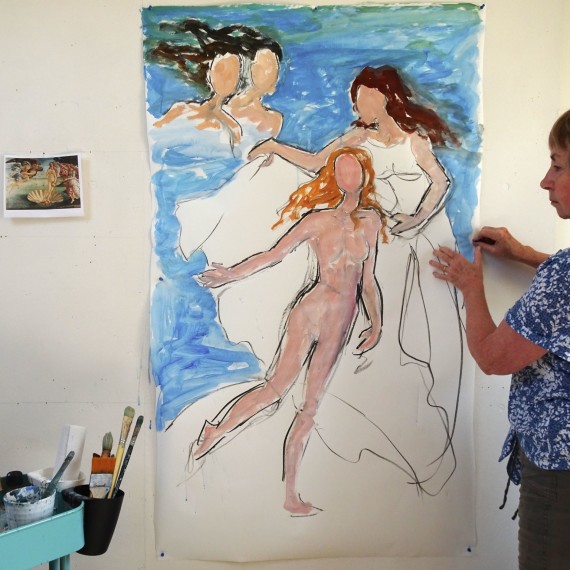 But I couldn’t make it work so drastic action was required. I tore the image into small pieces and stuck them randomly onto a fresh sheet of paper. It was important to me to retain the essence  of the subject even if I would be the only person to realise this. I had tried this approach in Cyprus and found it helpful. 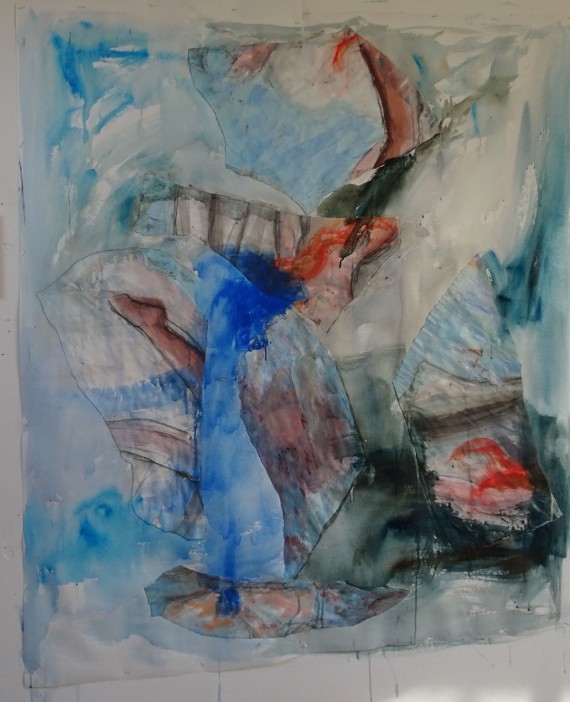 I let my imagination take over and the red changed from red/gold hair into the blood of childbirth. I adjusted the darks and lights to improve the composition and unite the torn shapes using a variety of materials, from acrylic in thick and watery dilutions to charcoal and oil-bars. I worked over the surface in an immersive manner for a couple of days until I felt it was finished. 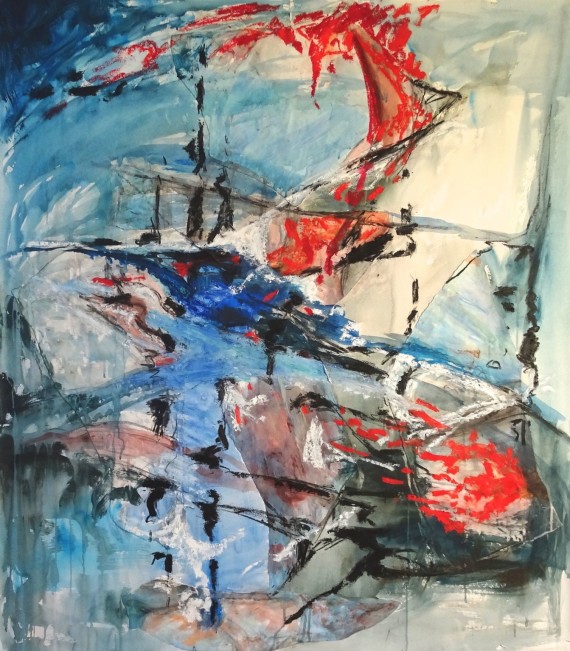 Not 100% sure it’s finished but certainly more pleased than I was at the outset of the painting. I left one recognisable point within the fairly abstract image which may or may not lead the viewer to see Aphrodite diving into the waves. I enjoyed the physicality of making this image which was pinned to the wall enabling me to engage with the materials more freely than if it was on a canvas on an easel. It was also good to work on a ragged piece of paper which allowed the image to expand or contract without the limitations of a canvas. Something else which I might repeat.

The experience of working in a completely new environment in Cyprus was invigorating and made me push the boundaries of my usual practice. I felt that I had developed a little further towards seemingly unattainable goals.