On following a suggested link, from a comment on my last blog on studio space, I have discovered an artist who has some similarities with my own practice. A slight obsession with the subject of water. He seems to be drawn towards painting water as often as myself. Not sure if he shares my passion for immersing myself in water too?

But it’s good to know that someone else shares my simple pleasure in this most fundamental element. I have frequently wondered if this subject is enough in the face of contemporary artists who seem to focus on more intellectual, concepts and strongly political issues such as poverty,  gender issues, Global warming and other quite difficult themes.

The endless  tactile,  visual and emotional experience of observing and being within water are more than enough to sustain my artistic practice forever.

That feeling of otherworldliness as you slip beneath the surface never ceases to thrill me. The sensation of weightlessness, freedom of movement and escape from reality is like a drug. Endeavouring to express just a fraction of what that feels like, through my paintings is a challenge which will never be fully accomplished but equally will never cease to be a challenge. 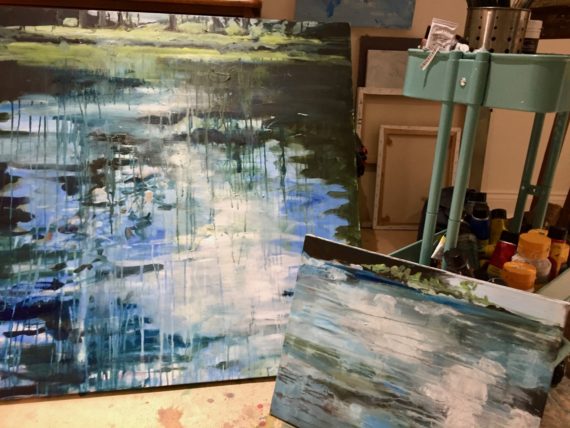 Went into Ipswich today to meet up with a couple of arty friends from my time at Suffolk University. We all feel the need for a good studio space. They share a studio space at the Atrium at the university and I work in a space at home which is not ideal. Their space is a bit quiet and restricted but at least it’s not in their homes.  Vital to keep in touch with friends like these and it was invigorating to chat about art. I rushed home to do a bit more to a painting I’ve started about wild swimming in the river at Warraba in NSW. I had thought it was finished but suddenly needed to do more to it.

Here are some closeups of the surface. I think there’s still more to do. So hard to know when to stop???

Tomorrow is my teaching day which I’m really enjoying now and then next week I’m returning to Ipswich to see another friend who is also looking for studio space.

My main initiative for the next few weeks is to solve the studio problem and to push forward to apply for exhibiting space and kick start my practice yet again. Australia was a blast but I must get back on track. 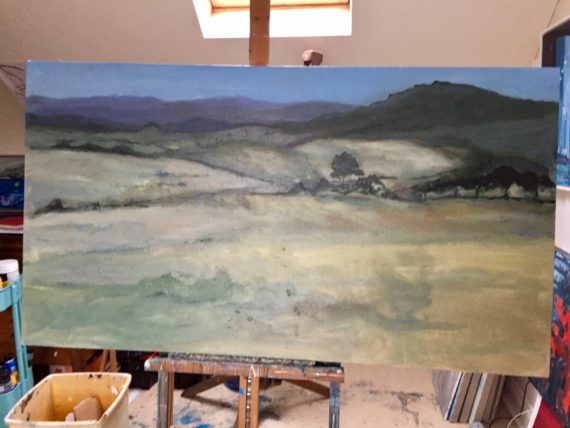 Just got back from a month in Manilla, NSW Australia. Even the locals were complaining of the heatwave we had. Intended to paint but my brain was frying and the most I could manage was a series of small watercolours. 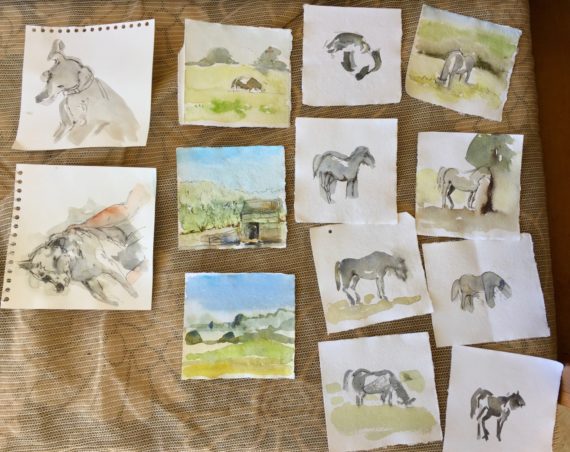 Mostly horses. There were 10 on my stepdaughters  vast 200 acre property. But also tried to capture the view from the verandah where we spent a lot of time just gazing and drinking in the amazing spaces. As well as drinking cool beers and wine! Unless you’ve been to Australia it’s impossible to truly appreciate the space. It’s monumental, daunting, exhilarating and impossible.

Returning home I immediately set about trying to recall in paint all the mixed feelings and impressions of Australia. So far I’m failing miserably.

The first big painting I started has rapidly degenerated into my former descriptive, figurative style. I keep shouting No!!! in my head but it still comes out as a figurative image. It’s as if I haven’t spent the last 6 years doing a BA and an MA and pushing my practice forward. Gone are the aspirations to paint from the memory of experience and to create an ambiguous reflection of time and space.

So here I am blogging about my struggles. It usually helps to articulate my thoughts by writing….thinking aloud on paper….well on a laptop but it’s similar. I’ve somehow got to inject the heat, dust, colour, joy and space into the image and at the moment, working in 3 degree grey UK after temperatures in the high 30’s and low 40’s it’s just not working. I’m lost as to how to do that.

Also spent time in the local pool and swimming in rivers and small lakes. Maybe I should start with that aspect…. more my natural element. Hmm now that’s a thought. Back to the drawing-board.