A chance remark from a fellow student, has made my day. I said how much I loved the Ab Ex show at the RA and she immediately said it wasn’t her thing and she didn’t expect to like it. I was surprised that someone could so instantly dismiss something I thought so good. Later, thinking about that, I realized how much I liked her certainty and how sensible it was to not spend or waste more time considering once you’d made up your mind about something.

It made me see how silly it was of me to be agonizing about not going to see the Spill stuff. I have almost a horror of performance art. Much of it makes me cringe. It just isn’t my thing ! Much better to simply admit it and move on. I often feel a sense of guilt if I can’t understand or appreciate some forms of art or some opinion about a subject. It makes me think there is something wrong with my attitude or some gap in my knowledge when, in fact, there is nothing wrong with holding a different view. 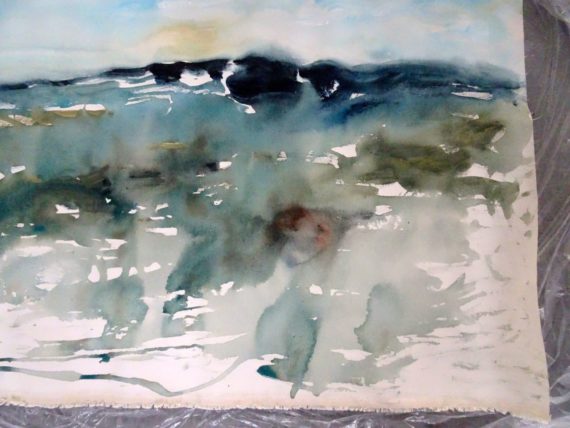 I’m lucky to have gained a new studio  space for the final year of my MA at Suffolk University. Went in today on a non-contact day and bumped into two friends who were with me on the BA course and who now have a shared space in the Atrium Studios. Also two tutors and two technicians. These random conversations are what makes going into a more distant space so worthwhile. Although I do have a good space at home it is all too easy to get sucked into doing the washing-up, watching addictive,boring TV, making toast… and all those other comforting silly distractions.

So instead I found myself sloshing watery acrylic around..thinking Helen Frankenthaler. Remarking on Sarah’s embryonic DiebenKorn painting and Julie’s lovely mono printing efforts and then promising to meet up with one of my tutors to talk about my painting. Time much-better spent.

This painting is too large to photograph easily so I made a video link. It’s about the process. The paint is quite dilute so that it can run and flow. But I’m in control …well mostly. The element of chance plays a part too and I react to the patterns and marks made accidentally. It’s a give and take motion. I like not knowing where it will lead.

I’ve been playing around with this tonight and think I’m getting somewhere. It’s hard to know if it’s complete but I get a kind of gut feeling about when to back off and think. That moment has arrived. So one more video clip and an attempt to show the whole canvas

This is it as at 14th Oct…..it might change again. 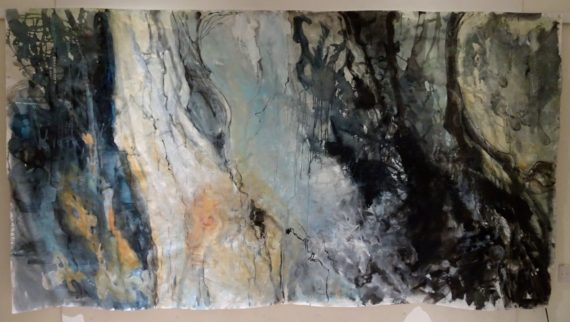 A visit to the Abstract Expressionism Exhibition at the RA has enabled me to begin to put into words the germ of an idea to explain what I am trying to achieve within my current art practice. I struggle with ‘Artspeak’, generally preferring to just get on with the practicalities of painting rather than endlessly pontificating about it. But slowly I am appreciating that I am thinking intellectually about what I am doing even if I don’t talk out loud about it. 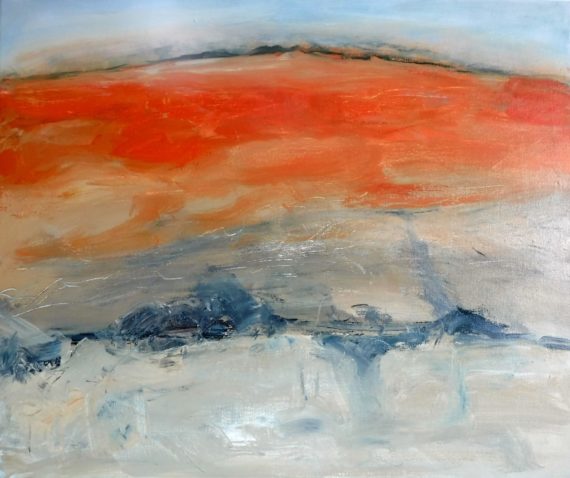 In the past I have lamely mentioned ‘sense of place, memory, non-figurative representations of landscape’but would like to add a slightly different but more exact explanation which is, I hope, rather better. 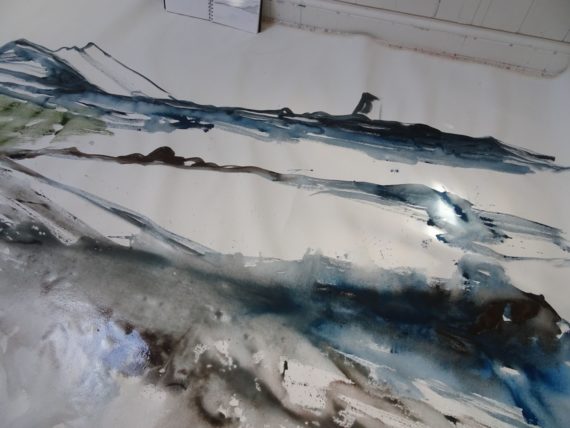 This very large (unfinished) painting is the first in a series in which I am trying to trick the viewer’s brain into believing that they are actually in a different space by somehow involving all the senses of sight,smell,sound and touch,for a split second, as they catch a glimpse of the image. Hopefully they will then stop and look deeper into the image. It should be a stronger reaction than just a ‘sense of place’.

I want to create a physical feeling of being able to actually smell the sea, feel the wind, hear and see the waves; to give a shock of believing they are standing on a beach. Obviously it will not be a sustained feeling but I want  to elicit however briefly that all the senses have been involved within my making of my work and that their senses are involved in looking at the image.