Had a great time in this beautiful place. Reliving childhood memories with adult eyes and seeking inspiration for the final push on my MA. After painting Kate in the wide open space of the Pompidou Centre I was again struck by the dwarfing of us humans in spaces.

This is where I stayed. A beautiful secluded cove  reached by climbing down over 100 steps. Well worth the climb but my photos just don’t give any idea of the perilous height of the cliffs. As well as the steps, it’s possible to scramble up the cliffs and to stand dizzyingly close to the edge and overlook the sea. It suddenly occurred to me that I must try to paint this illusion. A chance encounter with a girl walking her dog gave me the idea of including her to give the image scale…a tiny human centred within the ancient landscape. Creating the sense of place….the towering cliffs and the aqua sea will be more difficult

Here are a couple of quick sketches I made of the girl with her dog. I also made a watercolour drawing of her silhouetted against the sky when she later climbed to the top of the cliff. Her lovely thick auburn plait and pale aqua wellingtons flashing in the sunlight – a serendipity addition of unusual colour and detail to be included somehow. 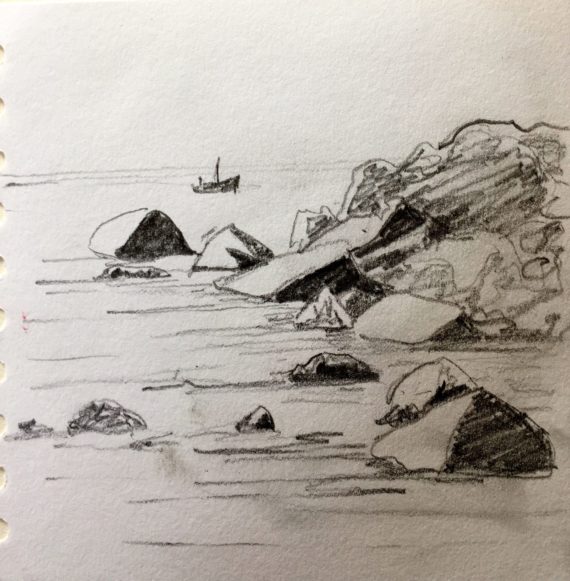 I made several other drawings of the scene which I shall use as reference though not too closely. Close observation can cloud out the memory of how it felt to be out in the sunshine in such a beautiful spot. That is what I want to try to express in the painting. That and the sense of space which eludes the camera. The ability of the human eye to internalise the distances it sees by constantly changing focus can sometimes be produced through a video but not easily by a still photograph. Whereas a painting can do this. Jacklin mentioned in my last post is an example. Friederich , Monet, Deibenkorn,Eardley, Andrews are others I’ve looked at recently.  A monumental task but I think I’ve hit on the right direction to take my painting…at least for the moment 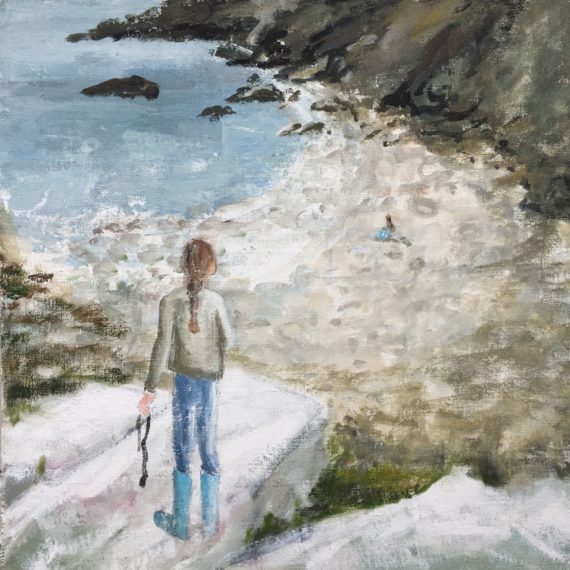 And here’s the painting. Much more figurative than I have been doing lately but decided to go with this for the moment. May try again being more abstract and thinking myself back into the moment. Hmm…. will have to see and more importantly to think about it. At least I think I’ve achieved the feeling of space and height above the beach but would like to go more abstract.