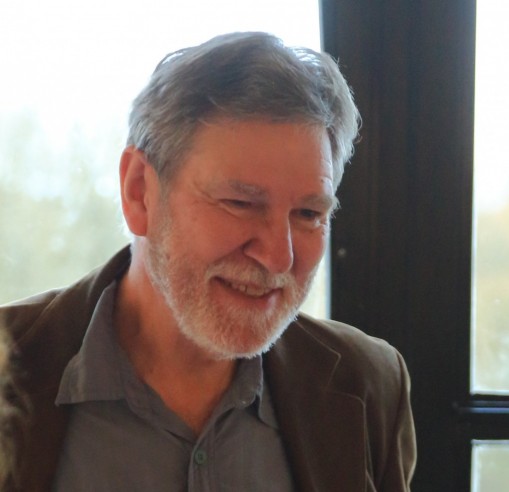 Chris Evans came into my life just six months ago, the news of his presence and interest in the project landing in the website inbox last July (2014). From that date onwards, behind the scenes of BIAB, he became one of my staunchest supporters, ready at every turn to help with my research, attending all my events and even documenting my latest exhibition. Knowing I would be too busy to take photographs he gently took the helm of my camera and took some beautifully observed shots of the PV.

His passing on Tuesday 17th February has proved profoundly shocking, and I came to know that through a steady stream of emails and our brief encounters in real time, numbering only four, (but all so memorable) he had become a brother – a much longed for older brother.

Some souls come to us so briefly and yet so sweetly. Chris was one such soul.

Art connects us, death parts us but we remain family.

The image of Chris at the Exilio PV shown above was taken by Stu Allsopp.

A highly emotional day at Barcelona in a Bag – Almudena Cros, President of the Asociación de Amigos de las Brigadas Internacionales, made me a gift of this genuine Retirada suitcase, and sent it through the post from Madrid. Essentially a painted wooden box with a handle and clasps, this beautiful object puts all the other suitcases in the collection in the shade. They of course look down on their country cousin from their wobbling pile – there’s strength in numbers. But this hard case is a survivor.

My first thoughts are that this suitcase predates the ones I have, but perhaps it is because this is an artisan piece – handmade. It is a rustic village suitcase with a minimal of industrial process (in the metal components). It’s size suggests no overnight stay but a longer journey, and so it was. Is it fanciful to suggest it could have been made especially? We must remember that time would have been precious in the final moments of the Spanish tragedy, but there is a possible precedent, I found in earlier research, in the figure of Enrique Tapia Jiménez.

Enrique made a very similar suitcase, used during his family’s flight from Catalonia, which I was stunned to learn was used to sleep his three month old baby boy in exile. Again we don’t know exactly when it was made. Enrique was a pilot and amateur photographer, thanks to his reportage of the retreat from Spain, the camps and the Spanish exile community in Toulouse there is a wonderful archive of images, including one of his suitcase (not available in digital form). This image, seen in the catalogue of El Ojo del Exilio 2004, inspired my very first Ofrenda piece – the suitcase cot, which was shown with the lid open and later shut, during open studios.

As the photos at the top show – once I made my way through the acres of bubble wrap – I was fascinated by the patina of the painted wooden case and thought I saw uncanny likeness to some of the EXILIO landscapes. Not for the first time this week did I marvel at the human eye and processing skill of the brain, working in tandem, unconsciously it seems, to record and transmit (not literally of course) the data our experience. The suitcases nestling in the studio have their part in this transmission of the landscape of exile – and so it was with wonder that I met their cousin and saw aspects of my canvas’ and boards staring back at me.

It’s been by far the most moving of all the objects I’ve encountered in the project so far. This case was used by members of a family who it appears went into hiding (internal exiles), and who later, on their return home, stored it in an attic until it came onto the market in Spain decades later. Almudena bought it some years ago, but was now looking for someone to pass this extraordinary object on to. I’m extremely privileged to be the one she chose.

Here’s a fragment of the narrative, written by the man who sold it to Almu, translated from Castilian into English by me.

“I acquired the suitcase in a village of the province of Cordoba. It had been stored in the attic of a house, and the lady who owned the house told me that it belonged to her parents, who fled the village and stayed in Pozo de la Serna, or somewhere like that throughout the war. When the war was over, they returned to their home and stored the suitcase in the attic.”

He says that there were many other domestic items stored with the suitcase from the period – a fact I will be looking into to try and reunite the objects and piece together the story.

Inside it was this message from Almu – which served in the nicest possible way as the coup de grace of my emotional outburst.

“Because without your work, Memories would be lost. Thank you for reclaiming the history of betrayal, loss, exile, compassion and salvation.

In loving memory of the Spanish Second Republic.”

Receiving and unwrapping this suitcase has been beyond powerful, and I confess to breaking down in tears. The way in which this wooden box connected me to the moment of my own family’s flight was visceral and overwhelming. With a little distance from the exact moment but with enough proximity to feel it still, I know that this dusty box with a handle acted as a portal to the past in ways I can’t adequately describe. It was an entirely sensory experience. It brought my grandparents to me; the swish of my grandmother’s dress as she speedily packed, the smell of naphthaline in the closets they would leave behind. The panic.

I wrote to Almu in the moment. She had also found my film Without You I Would Not Exist deeply moving.

“Almu it is my turn to cry. Thank you for your passion and commitment to this memory – without which I wouldn’t have received this gift, which strikes at me like no other. I am in touch now for the first time with my ancestors, with that moment of flight. I am seeing it, touching it, holding it and I am weeping. Thank you so much. I am speechless. The power of objects to connect us to our histories is extraordinary. I am very, very humbled. 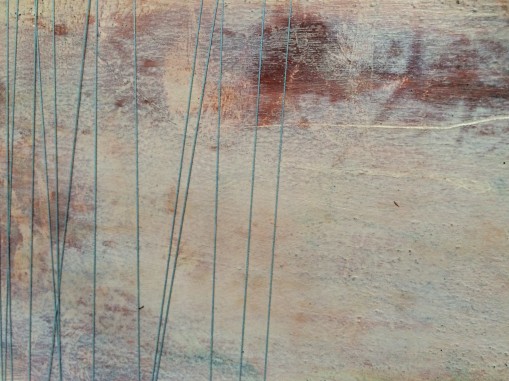 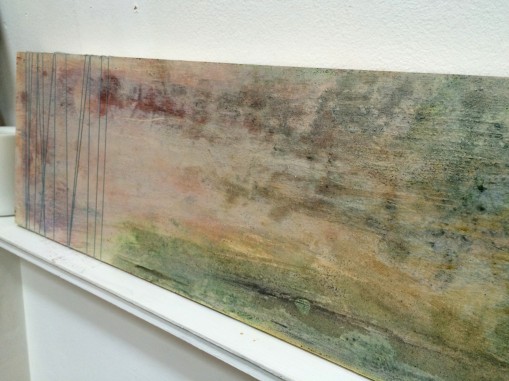 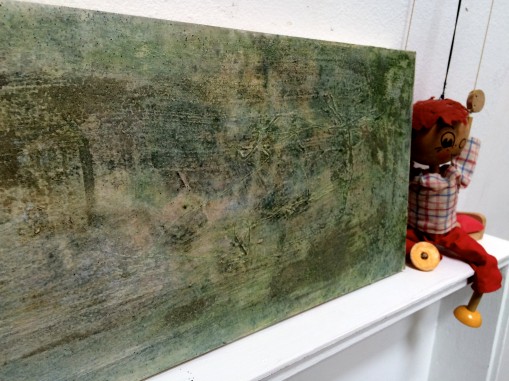 In freezing conditions, I focused today on arrival.

In truth this month I am supposed to be thinking about the flight from Spain – the Retirada – as we have reached the 76th anniversary. But that was last February’s deep, deep exploration, in which I felt the grit of Argelès and Barcarès in my eyes, my teeth and hair, and I made copious traffic violations due to the intensity of it all. It was the month I discovered how Abuela cooked rice on the platform at Port Bou, and how my grandparents evaded the deadly round-up for Mathausen in 1940.

All of this I learned for the first time.

The cold Port Bou station platform chilled my bones as I lay in my own warm bed. I woke many times in the night with Abuela’s hand in mine, her furrowed brow signalling anxiety about some detail of the story. She patted my head and made silent entreaties to me to write my blog well, not to forget the children and to remember to make tributes for Robert Capa and Gerda Taro. Her ghost was truly with me and remains so.

Immersion seems to be my method – and so it continues, but for now I am in England. I am in the moment of arrival – June 1939. I have the photographs of the exiles at Old Prebendal House to guide me – pictures in which my 18 year old father relaxes in the grounds and smiles at his Quaker hostess, Mrs Wainman. What must those early impressions have been. One of contrast, surely. I feel it as landscape – as a wondrous drinking in of our green and pleasant land after the punishing arid camps of France. Soil for sand. An end and a beginning. Grief and hope.

The thread I’m beginning to use in this new series of works is initially held within the textural media. Once the media is set I fish it out leaving a looping trail embedded within the surface. During this process I’m thinking about the trail of the exile journey and the tangle of jumbled emotions provoked by the rupture and subsequent hardships – while knowing one was lucky to have survived.

Once I have this basis to work into I can start layering in paint and further media – this time sand rubbed in for texture, as reference, and also to rub down. Yes, the sand has become most versatile in the process of building, concealing and revealing layers. For the first time today I saw what was in front of my nose all along. I could rub the sand across the surface of this painting to get something back, which had clouded over. So now I have another technique to fall back on when water washes and cloth dab-aways don’t cut it. Clouding over, losing vibrancy, and generally fluffing areas of the painting are problems I encounter often as I’m pretty bold in my methods and I’m not afraid to lose everything.

From the perspective of exile, a painting is nothing – one has lost everything – and yet paintings represent some of the most potent vessels I’ve found to distil what I can of this post memory experience. Perhaps it’s this truth that enables me to take my task so seriously yet remain playful with the surface.

Threads are also finding their way to the surface – wound round the board at one end – a refence again to Henry Moore’s Spanish Prisoner lithograph currently on show at Pallant House Gallery in the Conscience and Conflict show.
http://pallant.org.uk/exhibitions1/current-exhibitions/main-galleries/british-artists-and-the-spanish-civil-war/british 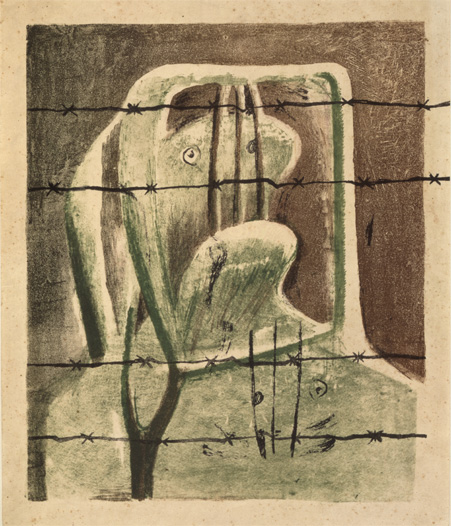 Abuela is pleased I continue. She likes Arrival, though as we sat today in the studio, turning our heads this way and that, we weren’t sure if it was finished. There’s a gap isn’t there? I ask. Abuela pats my arm and gets up to make coffee. She ties on her apron and turns to me. There are times when a gap is just the right thing, she says. There were plenty of gaps, believe me. And I do.