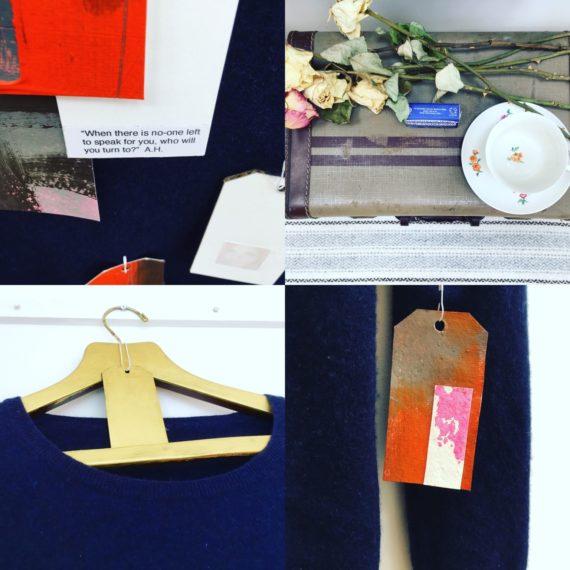 (This image is of continuing work on a tribute to Heather Heyer, I must now find a way to extend my witness within my practice to grieve for Barcelona.)

There are no words for the atrocity which has taken place on the Ramblas in Barcelona. Yet I persist. I need to try.

I watched the horror unfold on my laptop. It had been a gruelling day. Unwelcome family news, a day spent in hostile sensory environments and the predictable near meltdown in a supermarket. It all paled as I took the news in.

Yesterday was also my wedding anniversary. As I held a glass of chilled Cordorniu and took my first sip I closed my eyes invoking a memory. It’s the same delicous cava my grandmother ritually served in celebration at our arrival from England to Barcelona between 1962 and 1975. Her dusty flat overlooked a series of now vanished warehouses to the old port area. You could see the statue of Columbus, from which the Ramblas begins (at the port end) from the shared roof terrace on which my grandmother hung her sheets to dry.

In my imagination the Ramblas begin almost at the foot of the marble stairway which opened out from my grandmother’s door and down five flights to the street. In reality it is several blocks away, but they seemed to melt as I drank on, recalling the particular intense dry heat of Barcelona, which in my memory always greeted us on arrival from England.  As the taxi from the airport ejected a travel sick child onto the pavement, she would be moments away from grandmother’s joyful pinching of cheeks and the popping of a cork. Small sips of cava were encouraged and a cream confection was served back then. Our arrival was met by such ceremony (I later learned) because our separation from my grandparents had been forced. My father was living in England in exile and all our reunions were both joyful and filled with grief.

The bubbles on my tongue connected me to the Ramblas. They formed a memory hotline to that smaller me whose footsteps wore lovingly at the wavy paving which appeared on my screen as a crime scene shot. It was my stretch and I walked it so very often with my hands held by one parent now 90 and, one too long dead.

As a child I adored the decorative pavements of Barcelona – they were my friends and helped distract me from tired feet. Even as a child I understood the Catalans knew how to do street furniture, while in my other home (Birmingham), not so much. The Ramblas appeared to me as a paradise of exotic (and not so exotic) birds in cages, luscious flowers and foliage, magazine and book kiosks. It wasn’t a tourist trap back then. It wasn’t a death trap either. No one had invented cars and vans as lethal weapons for terror.

Barcelona had seen other atrocities, but I was blissfully unaware.

And now this. A senseless bloody carnage.

I don’t have any answers of course, I only know that when I grieve it’s for the old seemingly safe Ramblas – those seemingly more innocent times (and yet I know now that their backcloth was dictatorship). My nostalgia is thus tainted, and I fear we will hear more about how good things were back then. I hope not.

My work now entails researching aspects of the Spanish Civil War.  As I viewed the colour photographs of chaos on the streets and armed police defending the public in 2017, my mind superimposed the black and white photographs of the street fighting in Barcelona, which marked the outbreak of civil war 1936.

Tricks of the mind.

And tricks of the mind is what we seem to face in all this horror. Somehow, somewhere human minds are being warped in dark and not so dark corners. We don’t yet know what this pattern means – the cycle of wanton carnage by the few and civic defiance by the many, as we witness again a show of citizenry on the streets chanting, we are not afraid. We only know that it’s becoming all too familiar, like a ghastly tape on a loop that won’t stop playing in increasingly rapid cycles.

I only know that a few days ago I began my tribute to Heather Heyer, invoking my Spanish ancestors to help me in my witness, and now I must cast my gaze to my old home town of Barcelona. Somehow these moments are joined despite their distant geographies.

My heart is breaking for Barcelona. For the Ramblas, and for all the victims of this latest act of terror. It seems the acts of witness are never done.