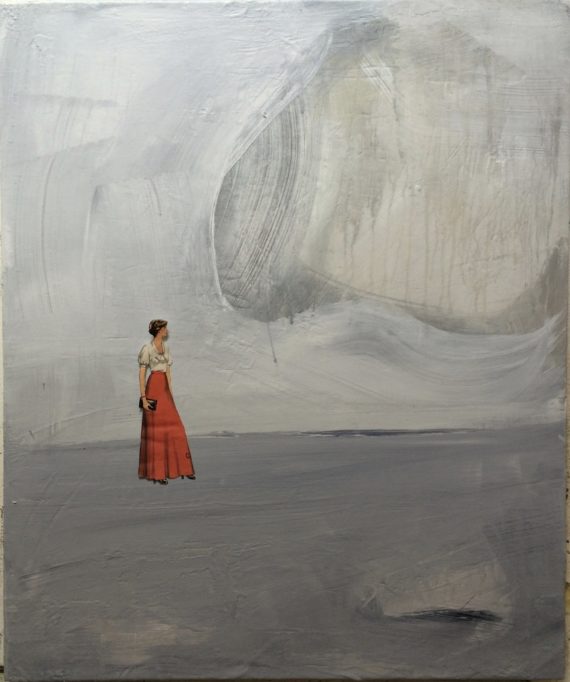 Emerging from one idea – to respond to a particular space – I find myself co-habiting with a peculiar bunch of images which go deep into my psyche.

This was supposed to be about landscape (okay some of them are & two of these have already flown the nest – sold and gone for good). But what I find is that it is often never that simple and I’m working though something singular and complex. Landscape here is a warm up or a backcloth to the cut out figures who take centre stage.

Through them – but also through their placing (or indeed staging as it were) I’m pin-pointing precise moments (places, events, emotions) of my Anglo-Spanish childhood under the hidden shadow of the Franco dictatorship.

I know exactly where I am in these works. They signal a curious return. They are wistful and joyful – nostalgic in the extreme. They are also frankly a little strange.

So I’m at both at home with them and uncomfortable. And I realise that this is perfect.

I have also set myself up in creating these works for my first experiment of showing in a wholly commercial space. They belong within the body of my postmemory works and they need to stay together as my overarching project unfolds. I have to own that they will not be at home on their first outing. Marvellous! Conceptually speaking this could not be more perfect.

Wilful imagination – powerful unconscious compass! You take me where you need me to go but not where I planned for. Like forgetting to take a coat on holiday and arriving in a storm – I am unprepared. My work makes me naked but actually I love that.

Haha! I find it as difficult to translate myself for a market as my exiled father (and playwright) did in sharing his vision of the Spanish dictatorship with British audiences. In a very real sense I’m working in a family tradition. Hey dad – I’m on it!