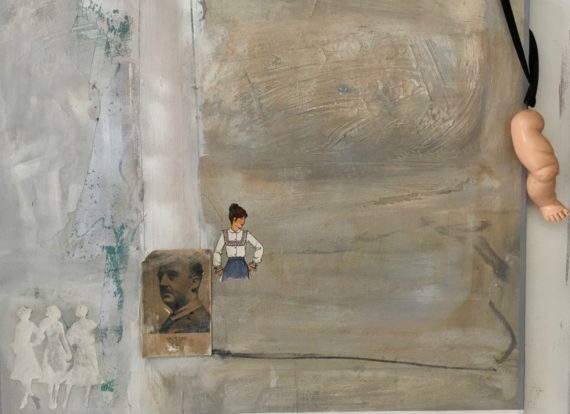 Okay, so I’m going there. Don’t Look Now, is one of a new cycle of paintings which has been brewing in my studio in the aftermath of my Radio 4 programme, The Art of Now: Return to Catalonia.

I’ve been through one of the busiest periods in my creative practice – a gruelling few months completing my a-n Professional Bursary work on a film called, Gift, taking on a new film commission called, Dual Identity, having a solo show at Arts at the Old Fire Station Gallery called, Buenos Días Dictador! with the radio commission coming in on it’s heels.

On my return from Spain, I had to play catch up on my Arts Council application for the Museum for Object Research project.

In the past few weeks I’ve been working on two collaborative projects, one with Richard Hunt of the Shadowlights group and the other with St Luke’s Church community. Opportunities to talk about my work have also arisen.

It’s all part and parcel of a busy creative practice in which studio time can feel seriously compromised. I compensate by keeping creative projects I can add to at home – assemblage pieces which don’t involve painting are ideal. I have a new performance piece in progress which is evolving piecemeal in my living room.

So this new cycle of paintings, begun in a flurry at the end of April, sit in my studio gathering dust. But I make the most of this too in terms of resonance, and I try not to feel too fragmented by all the disparate elements of my creative life.

Slow cooking can be a great thing. Work can be given time to develop and collect associations. This painting has become more meaningful in the current context than it was when I left in the studio a few weeks ago. It’s allusions are obvious and specific to my subject – the Spanish Civil War and subsequent dictatorship. Yet today, as I made a small donation to ActBlue to support families separated at the US border, I found a new relevance.

My painting had felt crude and I left feeling it was unresolved. The doll’s leg is deeply significant to me and yet I always feel uncomfortable when I try to use it in my work. Probably this makes it something worth exploring. Today I understood it as a reference to the children caught up in conflict across time and the painting feels finished.

My anxiety about using doll parts is that they are often baby dolls, or at the very least young infants. In my mind the allusion is almost too visceral – dismembered child victims of war are an atrocity we can barely contemplate. Yet this is and always has been a human reality. Humans are capable of maiming and killing their young.

Increasingly, I accept that I have to go there.

The doll, of course, alludes to the child at play. The innocence of childhood and the attachment to an object that can be cuddled and occupy a vital emotional space for nurture and hope.

The US zero tolerance policy now pushes me on. This is now a humanitarian crisis, fascist in origin and ideology.

I feel compelled to work with this leg – as a metaphor it holds the kind of power I need.

All I can do is keep going.