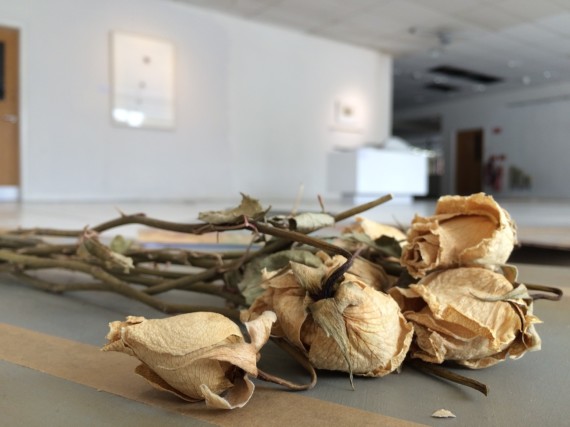 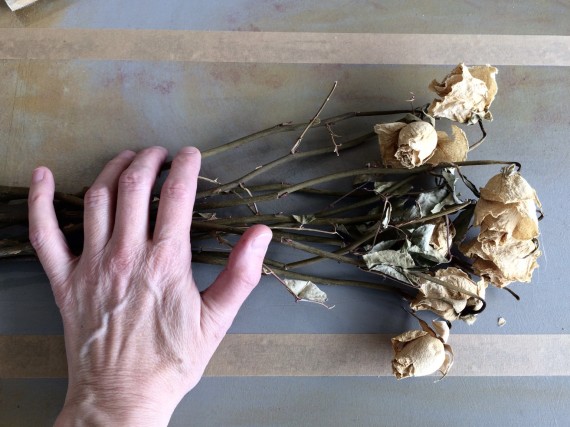 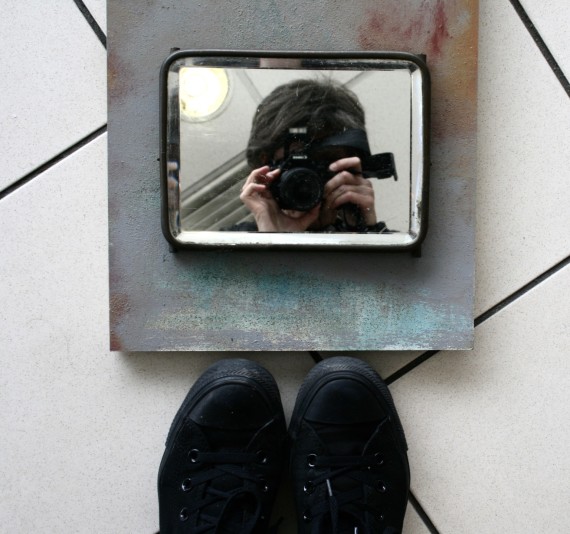 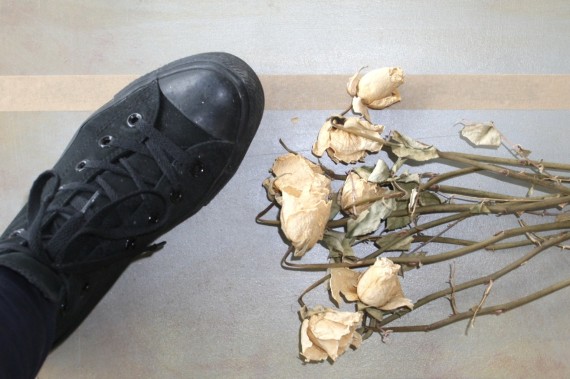 Things happen when you take a risk.

This much I’ve learned in the past few days, on exhibiting my work, Uncertain Weather System in Place, for the Magdalen Road Studios group show – Dis Locate. And I’m so glad I did.

As a multi-form artist, I work across boundaries and revel in experimentation, all of which can lead to me to take a risks if circumstances allow. For Dis Locate I submitted a completely new, site specific work of pure fusion. Yet, its resulting vulnerability has paid unexpected dividends in it’s capacity to accrue a more substantial meaning on exhibition.

In creating the work my attention was struck by the copious floor space in the building for our temporary exhibition. A former WV car show room, what abounds is flooring (and of course glass).

It prompted me to ask – what will happen if I exhibit paintings on the floor? What would such paintings look like, and how would they survive – came next. Finally, what will the viewer do when asked to look down instead of up or across? I was curious to disrupt space and create challenge.

My work is all about exile. Mainly of cultural and geographical displacement – forced and abrupt experiences of irrevocable change and loss. As the work developed it became an interlocking series of three floor based painted panels, on which I placed objects suggestive of domestic life. The resulting assemblage would be shown with no barriers, no markers. Nothing to delineate or protect it.

Natural disaster. Forced “migration”. Flight from terror. All such happenings can lead to improvised dwelling, often on an insecure floor space. So it would be with my piece.

So I knew it would be interesting, but I didn’t expect it to take on a life and a story of it’s own.

First the install – a three day affair in which my nomadic piece moved to four different locations before finding a decent shelter. It should be said that this was a protected and long distance affair, party because I was too busy to stay and talk it all through with Luís Manuel Araújo, (our amazing curator) on the first day.

This process was however demoralising. Other work found a decent pitch straight away – what was wrong with mine? This began to feel as it should do – without secure geographical moorings – I felt the poor relation. An unwanted and bothersome relation at that.

Finally, a brief conversation with Luís brought relief. A space in reserve (in case sliding doors would be opened for the PV) was made available, with the following words.

“The art is more important than the doors.”

It’s the you matter message. The we hear you. The your needs come first.

How often will the opposite be true and the displaced find themselves at the bottom of a pile of nonessential human “priorities” created by our complex “advanced” societies.

Second – the Private View. An extraordinarily well attended rip-roaring success of an evening, at which, possibly 300 people arrived over the course of 3 hours. Busy with my guests I largely abandoned post next to my work.

Later on (much later on) I thought to return. A drink had cascaded across the floor to it’s edges. Amused, I mopped it up – what would I have done if the drink had breached the edges though? Oh a dog’s been sniffing at THAT WORK! Someone cheerfully remarked. And a pushchair nearly ran over it! said someone else excitedly.

Swept away by yet another conversation I stood observing absently, as a group of three people chatted. One stood with his back turned to the work extremely close up to my piece. He could take a step back at any moment, a somewhat distant voice in my head warned. But the gears failed to connect and I said nothing to warn him. Again I was distracted by another person to greet and moved on.

Some while later a man moved suddenly forwards, towards the previously mentioned sliding doors, and stepped right onto my painted panels. This time I called out but was too late. I seemed to move in slow-mo while he went into fast forwards.

This was the moment I came hard up against thoughts about my responsibility to the viewer – I had not protected this person from feeling horribly mortified. The work was fine. It took a while but we got through the man’s embarrassment. Even if this piece had been damaged it would have been okay. I didn’t mind because I took that risk. Momentarily though, I felt bad. I hadn’t looked after him and almost given him a heart attack!

In fact, of course, this viewer had given me a gift, and I later learned that he wasn’t the first person to tread on the work either! How deeply this speaks to us of the status of the displaced and “othered”. Of the (literally) downtrodden. We keep refugees in out of the way places and at arm’s length, where no-one thinks to look. We forget about their existence as our privileged lives carry on without a thought.

Third – invigilation. An opportunity to spend quiet time with the work. Exhibition creates opportunity to see the work with fresh eyes. The photographs above represent all the thinking engendered by the past few days, and bring out the performer in me. Thinking about the accidental intrusion of foot on board, and of the dynamics of looking in the mirror in the piece, encouraged me to insert myself and take the exploration further.

Identity and ritual emerge as themes. I’m fascinated by the way my iPhone can capture a fragmented portrait; my face in the small mirror and my toes close up to the work.

More of this please – I want to do more!

Hurrah! I’ve downloaded the logo and created the bank account. Online and hard copy forms have been sent. We’re official and our work can begin. Thank you Arts Council England!

I’m debating setting up a separate blog here on a-n for the project, but with three blogs in existence already – one of which is for the Artist’s Eye project on WordPress (so that my non-artist partners could post) it might be a bridge too far. Yet so much is happening in the studio that I’m burning to share it right here. This space is different from WordPress.

In turning this conundrum over in my mind I’ve come to see a-n blogging as a most precious conversation with a more specialised readership. I can write about my process without fear of sounding bonkers or frankly boring a wider readership.

The studio process is perhaps unique – I turn up for work and seal myself in. Preferably I speak to no-one and the hours are consumed as quickly as the bagel I gobble down between washing my brushes. Off duty, my thoughts are with the latest developments, and also the myriad non-studio tasks required to manage the project and make it happen.

I knew that this project would push me into new areas in my work. I planned to respond to Felicia Browne’s drawings by adopting graphite and charcoal into my practice, but thought this would lead to abstraction of line, which it still might.

Currently I’m working on six painted sketches. My poet collaborator and I are attempting to conjure six scenes in Felicia’s life, six vignettes (perhaps) of her short life plotting her trajectory from her birth in Surrey to her death in Spain.

The surprise has been the urge to reach Felicia through a reinterpretation of her sketches. With my hand I trace the movement of her hand. With my eye I try to capture the scenes she saw, examine the faces that fascinated her, the details she caught. I try to speak her language.

This I marry with my brush, my lexicon of line and wedge. My insistence on texture and layer. This is my language.

Something about this process feels like channelling. Is it foolish to imagine this as conversation? One friend I described my process to remarked that it sounded “like a tactile seance.” I guess it does.

Through this process I’m arriving at something new and unfamiliar. This is work I don’t fully recognise. But these are sketches – to be shown as process work at my studios for peer evalution. I’ve yet to discover what will occur when I move up scale and work on the final pieces for exhibition in the place of Felicia’s birth.

This is a detail from “Scullion with a Red Wedge.” Using both Felicia’s sketch and material from one of her letters to arrive at this composition. 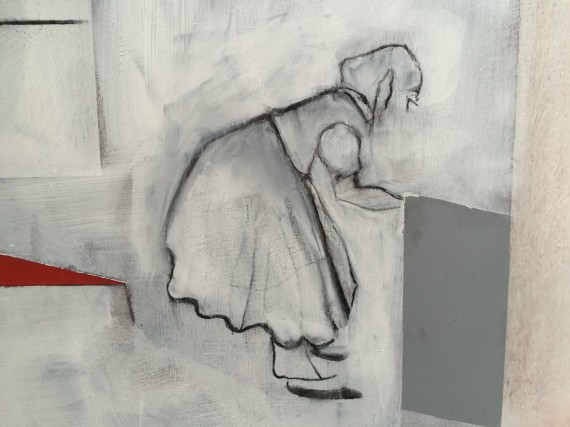