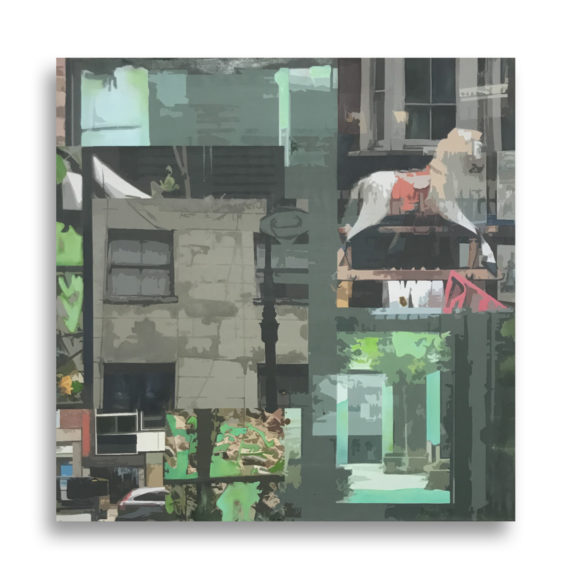 These words as I write encompass possibilities. Yes, if I wanted I could choose to defy the linear nature of the structure and conventions of the written paragraph. I could explode the visual layout and present in an alternative format but I think this would be too easy. Instead I’d rather utilise what we think we know, specifically to play with it; re-framing those coded understandings that allow us to exchange language to communicate a premise. Slants of light and shade can mask the reading in front of us.

The borders that make up a sentence; the capital letter, the comma, the full-stop, give us a beginning, a pause and an ending. But it is not as simple as that. What else comes into play in our compositions? What particular words are enclosed and what do they suggest to us? We can so easily assume certain words and phrases can mean the same thing to everyone, particularly when it is spoken or written in the same language. Yet the constant impossibility of language translation to articulate everything as it is meant to be understood surely is evidence enough that language is malleable and fluid. Everything is in a state of constant flux and that certainty of what I see and understand is as stable and unmoving as a shadow on the ground.

Magician, psychologist, anthropologist, film director – when we communicate each of us throws into the ring an array of possible readings and transformations. The paint upon the canvas, the movement of the gesture and mark making, the tone of the composition, the fetishes we reveal and display. Words and sentences are not solitary entities. They are alive and potent, carved and sculptured, an orchestra of history, culture, interconnections and displacements cast out into the air and falling differently every time. Even a copy or reproduction is not the same as the one before. It sits in a different place of time and reading.

I pass by some windows and what I see reflects so much more than the physical environment outside. The images and shapes shimmer, dance and entrance me. What I see today will differ tomorrow as the surrounding world changes and my imagination is stirred. 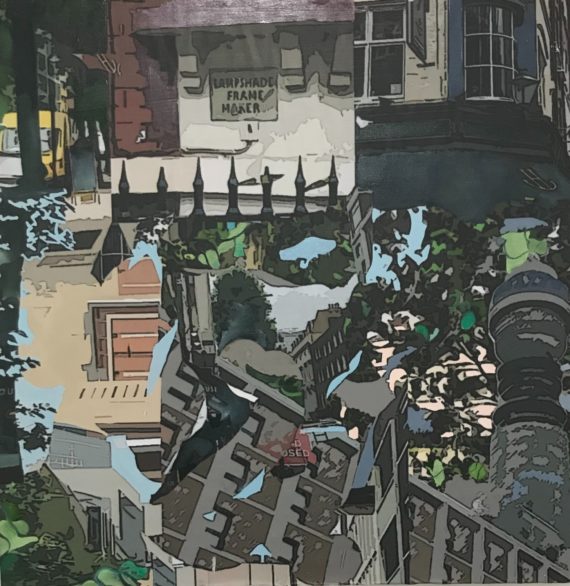 The broken down spaces could be called triangular, rectangular, prism-like but borderless. There is a crossing over, an infiltration, one piece encroaches upon another but as quickly as each aspect appears, it can disappear, out of view and out of sight as if it was never there.

She didn’t know this neighbourhood. A visitor, she wandered down the streets, noticing insignificant details and managing to miss well-known local landmarks. Her footsteps and eyes set the journey and she attempts to capture her visual experience with the camera on her phone. She feel watched. Looking up she sees Telecom Tower hovering above her.

You are all within MY neighbourhood. I stand as a giant among you overseeing urban landscapes you could not possibly imagine. I observe as the activity below ebbs and wanes depending upon the season, the time of day, the severity of global crises. I do not care. Structures and buildings come and go, many have been here, long before I, their crumbling surfaces turning to dust.

It is tired. How many times must it endure the changes inflicted upon it? Every year a little more of its brickwork gives way and needs to be patched up or replaced. It has served many purposes, a home for the gentry, an inn, and a nail bar with a couple of pokey flats at the top. It loses track but feels the indignity of losing its original high standing. It sighs. The windows rattle, the stairways creak and the walls give a slight shudder, disturbing an insect nesting in its crevices.

The masonry bee decides to move house. This hole has been its home for as long as it can remember, but it no longer feels stable or comfortable. It will seek a new cavity, in a sunny south facing wall in an old property in a different neighbourhood. Yes, it is time to upscale. It gives a small buzz of pleasure as the purr of a yellow van idles away below.

It is not here for long, a couple of minutes at most as its occupant delivers its contents. It is a nomad of sorts, belonging to no particular territory, although looking forward to its resting place at night, where its arthritic parts can attempt to recuperate. It is so very tired. There are bits of it that will not last much longer. Yet they are a family, working together; each is dependent on the other. Its unknown destinations and future is called into question. It trundles on its way, crossing spaces and neighbourhoods, in and out of view.

It passes her briefly but all that she registers is a slither of yellow as it sidles past.

Annoyingly the van is not always in my field of view, weaving its way around the streets, obscured by the landscape, the continual building works and equipment. Although I can see that it momentarily pauses by a nail bar, a converted old drinking establishment, where a bee quickly darts past on-route to a new neighbourhood.