Here in Northumberland I have been quenching my thirst for contemporary art with regular journeys across to Newcastle to visit the Baltic (they’ll be hosting the Turner Prize later this year) but I still feel a little too removed from a contemporary art scene. And if it’s not the 2 hour journey to the nearest contemporary gallery that’s making me feel cut off it’s the fact the working 50 hour weeks is leaving little time for art making. (Even this blog has taken me over three weeks to write now, every morning jotting down a quick sentence/notion between slurps of tea.)

(Nevertheless) I’ve begun the hunt for the She-wolf in rural Northumberland.

One particular wolf is of local legend here, and although apparently meeting an untimely end on the rail tracks west of the village here in 1905, I still hear people warn others about wandering around the forests at night in case they meet the wolf.

A quick google search of my home town ‘Hexham’ and ‘Wolf’ brings up articles from Mysterious Britain.com and The Fortean times.com – the world of strange phenomena vividly describing the wolf attacks at the turn of the century and even the peculiar case of the Hexham Heads in the 1970s. ‘a pair of Celtic stone heads were dug up in a garden not 10 minutes walk from the woods of the wolf. These uncanny artefacts were seemingly protected by an animalistic presence that would crash about in whichever house the Heads happened to inhabit. Interestingly, witnesses of this bizarre primal presence described it as being half-man, half-beast; the beast part was a wolf.’

However the scholar in me will not allow myself to put much faith in these Internet articles, and I’m curious to know how these wolf tales began.

It’s this curiosity (and I think a desire to feel like ‘a scholar’ once more) that led me to walking up the winding metal paint flecked staircase to the upper floor of my local library where the ancient microfilm scanner lurks. The dark wood panels library and cavernous dark brick ceiling makes this the kind of library where you are surprised the books aren’t completely moth eaten and disintegrate when you pick them up. Unsurprisingly there’s not a single book on contemporary art in their collection (actually there is very little that’s not romance, crime fiction or local history) but fortunately for me this week they do hold every single copy of my local paper, ‘The Courant’ on microfilm.

I begin pulling reels of film out of the metal cabinet, loading them on the machine and start scanning through pages of articles on local farming and adverts ‘NOTE! NOTE! NOTE! 1 CABINET free of all charge!. I have a good idea where I need to start looking but still a disappointing half hour went by and I found no trace of the wolf. I began to conclude the story had been sensationalized with the previously mentioned reporters banging out weird stories without any actual fact checking.

But then something came up.

Friday December 10th, pg 8, amongst notes on the Russo-Japan war; ‘BIG HUNT IN ALLENDALE: The Search For The Wolf’. I begin eagery scribbling down notes ‘Killed 4 sheep, severely injuring 2’ ‘Sighted in Sipton Wood, then Killop Law then across to Weardale’. In the weeks after more articles pop out as the hunt for the wolf catches the public imagination. After a couple of hours I have lists of notes following the exact movements of the wolf sightings over a couple of weeks as well as a few more humorous anecdotes , one regarded an unfortunate farmer who ‘was standing at his door when the wolf suddenly appeared which so unnerved him that he ran into the house and threw a cat out at it’.

And some articles that struck a particular chord with me noting ‘peculiar costumes have been worn’ while tracking the wolf, men wore ‘white dresses’ and how the ‘ornamental appearance of the hunters (was) enhanced by wearing ‘hoggers’ ‘

Now I wonder if I can find anything in the 1970s papers about those weird Hexham Heads?

Back to the library

when I get another day off. 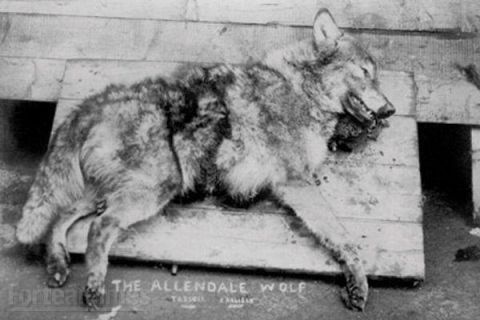 I have the pleasure in writing to you to inform you that the RSA residencies for Scotland panel have awarded you a bursary to undertake a residency at Cromarty Arts Trust… The panel was very impressed by your application and are delighted to offer you this opportunity… I would like to congratulate you once again on your award. We very much look forward to working with you over the next few months…..

A slow smile crept across my face developing into an aching grin as I jubilantly declared ‘yes! Yes!’ (to unfortunately no ones ears but my own). The smile still goofily lingers today and flickers back into a wide mouth grin when I recall my residency request will soon become a reality.

‘A month long summer residency with Cromarty Arts Trust would allow me to engage with an intense period of art making. My recent nomadic lifestyle means I have been unable to create the large sculptures and costumes that have been the keystone of my practice, and I am keen to once again grapple with the physicality of materials. The large Game Store studio at Cromarty is an ideal space for exploring a materials inherent properties, allowing for combination of traditional art materials with items gathered from the local parish, enjoying mutations and reactions between the two, both real and imagined. I want to bring what I saw in the markets of Piazza dei Ciompi to my sculptures and installations, irrelevant objects from forgotten rituals built into a shrine for the everyday and obsolete.

When living in Florence I was confronted with an unsettling duality around the way women were perceived. The mother/whore complex flickered between candle lit shrines to the Virgin Mary and the sequined panties of the female talk show hosts. Intriguingly I found this duality played on in a character I had previously found in local folklore, the She-Wolf. Idolised as the maternal Capitoline Wolf, yet represented as an icon of lust and adultery in Dante’s Inferno, the She-Wolf is a character suffering from a restless duality. I want to re-release the She-Wolf back into the highlands, creating a narrative combined with ideas of alchemy discovered at the Galileo museum, the peculiar collectors at the Florentine flea markets and my own passion for metamorphosis.’

What’s more, Cromarty is in close proximity to a highland wildlife park that a wolf pack calls home, so I’ll be up there as often as possible sketching and filming the animals – I’m absolutely delighted I’ve been offered this opportunity!

For now I will continue my project here in Northumberland. Unfortunately due to personal reasons I’m unable to move back to Glasgow for another few months so I’ll be trying to sink my teeth into Newcastle’s contemporary art scene. This week I will be meeting up with some art school graduates living in Newcastle to see what they’ve done post graduation, hopefully I’ll come away with a good idea about what I can involve myself in and what opportunities I can create for myself here. I haven’t stopped making art since I can home from Italy, and although I must admit the paintings I’m making in my parents attic are not going as well as I hoped, I’m getting results I’m interested in from my 35mm studies and some smaller sculptural pieces are worth investigating further. Filming in my local parish woods has been a wonderful experience and soon I’ll have to face the mammoth task of clearing out my computers hard drive so I can finally transfer my tapes to a digital format and see what images I’ve captured. Exciting!