We pack into a taxi and ask to go to the end of the road.

Actually, we request to be taken to the end of life.  The word sticks between my colleagues teeth slurring voie to vie. Our french needs more chewing.

The taxi grumbles along the path north bound, towards the Mauritanian border, the car-boot lock broken flying open over every bump. However this newly christened ‘road of life’ doesn’t last long and the path quickly dissolves into sand. We pay the driver and begin the rest of the journey on foot.

A skinny horse tethered between the acacia trees eyes us lazily as we stride out towards the North Atlantic. Towards the shoreline juvenile crabs skitter across the sand, scouring the oceanfront for carrion, their work leaving a multitude of furrows in the wet ground transforming it into the texture of elephant skin.

One mile up the beach something in the high tide line catches my eye; oval, leathery, a turtle shell bleaching in the Senegalese sun.

I have to use this.

I want to be a turtle.

This light hearted desire bubbles within me.

To feel what it’s like to have a shell, to transform into the turtle and take on it’s virtues. Sometimes with the street sellers clamouring for my attention I want to be able to tuck my head in, and escape into a impenetrable fortress.

Although this animalistic transformation has it’s roots in a more animistic tradition than what I’m here to research, this small action really capitalises on the immediacy of seeing something inspirational, and testing a work right there and then. I simply can’t help but play with it, it’s a beautiful object.

The heavy shell forces my movements into a slow uncanny trudge, leaving my own deep gauges in the sand, obliterating the fine lines of the crab. 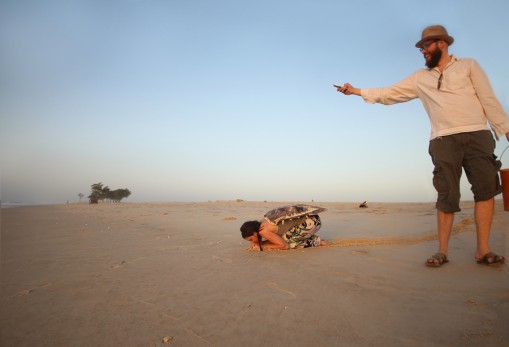 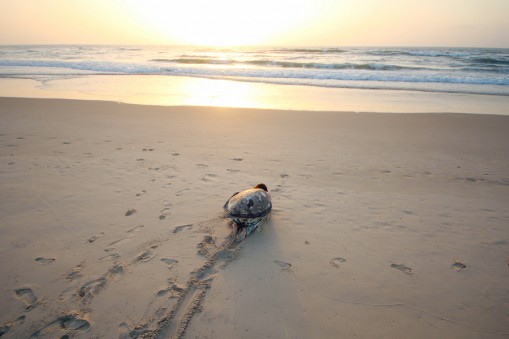 Here the Saharan breeze is accompanied with a flocking of fine sand particles that seem to settle in every mechanical and organic crevice. I begin to sweep the sand from my room and break out in a sweat. Such a tiny act of physical labour makes my head light, maybe I really need to think about the way I expend energy in this 39 degree heat. By my third day the malaria pills create a nausea that eats away at my stomach, the heat makes me faint. I should have drank more water. If I’d reached for the water bottle first before my camera perhaps I’d not be limited to writing from bed now.

I’ve learnt the hard way that a regular cup of tea is not adequate hydration.

So while I’m upping my water consumption to 5 litres a day to re-hydrate my shrivelled organs, let me share the photographs I’ve taken the last couple of days, a few postcards if you like, from Saint Louis.  Isn’t the light gorgeous here?

It’s the night of my first day in Saint Louis, but I feel like I’ve been here a week already. Maybe it’s because I’ve slipped in and out of consciousness so many times in the last 32 hours.

My arrival in Senegal coincides with the Islamic New Year. It is marked by flamboyant festivities in the street, turning my first evening in Saint Louis into a phantasmagorical swirl of sequins, wigs and shimmering make up.

The custom to cross-dress on Tamkharit has developed over generations of Senegalese children and this night does not disappoint. The streets are flocked with young girls with white chalk beards, boys in sparkly bustiers and men in full drag regalia, dancing and chanting in crowds that quickly swell and surge to the beat of bucket drums and disperse just as swiftly. 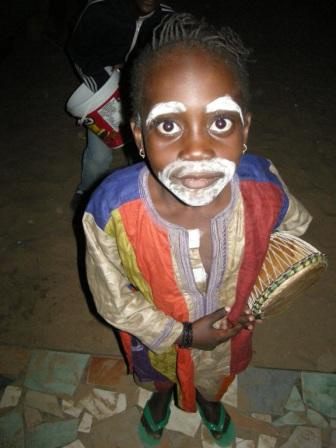 The carnival atmosphere can be liken to Mardi Gras or gay pride, however unfortunately despite homophobia being a recent import from western culture, it’s now throughly entrenched into Senegalese law.  An interesting result of this persecution is that involvement in a homosexual relationship is practically unthinkable, allowing same sex friends freedom to show a great deal of affection for each other, without any questions about their sexuality being raised. 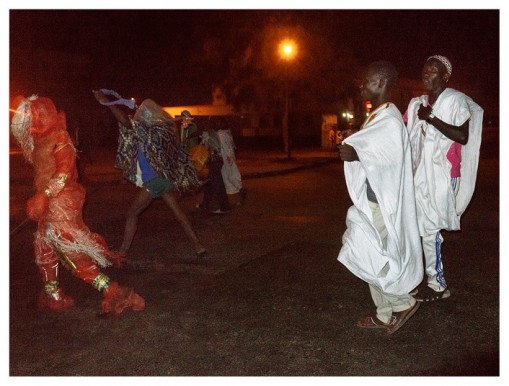 Swarming around me, boys in sparkling dresses dance chaotically with each other before exploding into giggles and run off down the street hand in hand.

I watch them disappear between the flickering street lights, as a rising chorus of beats and bellows signals another wave of revellers approaching. Swallowed by the jostling crowd, I’m carried with the current, before a towering man in costume breaks through the wall of people. Swathed in leafy cargo netting, dishevelled wig barely clinging to his head, his erratic movements split the crowd, scattering the onlookers as they giggle and trip to move out of the way of his wildly swinging limbs. 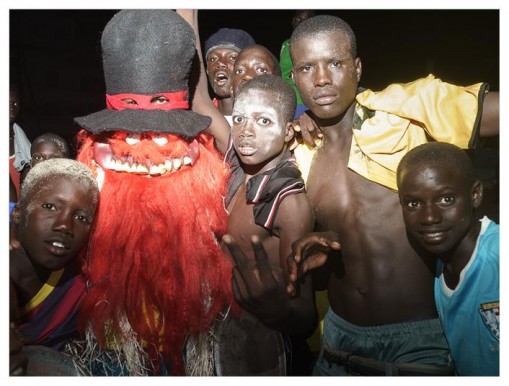 This ritualistic blurring of gender boundaries is a subject I’ve been fascinated by in my exploration for the liminal. The strange uncanny incarnations I’ve witnessed on the streets of Saint Louis this evening has been thrilling to behold and will no doubt influence my practice here. 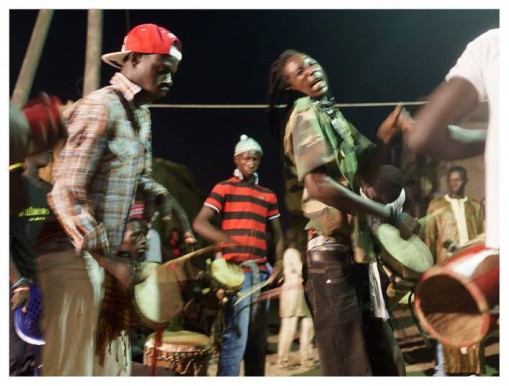 Second, Third and Forth by Raoul Ries, a fellow artist in residence at WAAW Centre for Art www.raoulries.com

I step out the airport taxi on to a sandy street. Sand! I know I grin, I’ve never lived anywhere where the city streets are sandy, and the exoticism thrills me.

It’s now 3am, but the city doesn’t sleep. The roads are populated with street sellers, garnering attention for their wares; small carts of fruit pilled with oranges and bananas, and petit tin nescafe stands with hand painted logos.

Arriving at Hotel Via-Via my only desire is to sleep, but the Senegalese night has other ideas. It’s pressing a dank oppressive heat, and a cold shower offers only temporary appeasement. Restless in the dark I grapple with the button on the standing fan, and it offers just enough relief for me to drop off for a couple of hours.

I’m starting to rethinking my commitment to the idea of incorporating a sweat lodge scenario into my work. But that idea belongs to another place, I’m here in pursuit of the old West African magic that survived and evolved through the French colonisation. I’m on a quest for the icons, amulets and rituals that have woven their way into daily life of todays Senegalese, distorting the orthodox Islamic religion that now dominates much of West Africa. 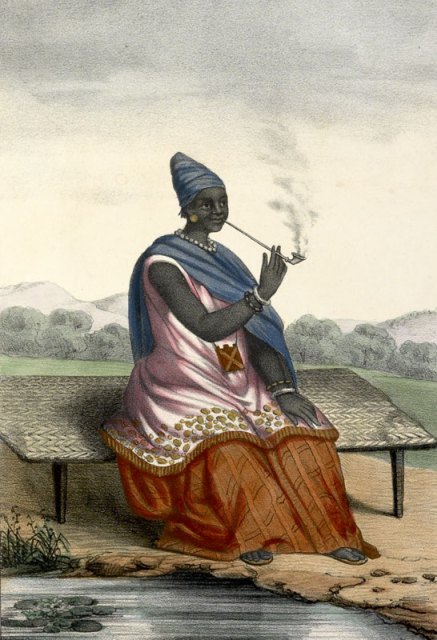 My inquiry begins in the next morning with a lengthy taxi ride from Dakar to Saint Louis. Five hours north of the capital, close to the border of Mauritania, Saint Louis was the first French settlement in Africa, once a trading port for ambergris, hides, and slaves, and now the seat of my investigation.

We are barely 2 mins from the hotel coming upon a roundabout when a short wide man roosting on its perimeter jerks up and signals us to pull over. It’s clear from the smart dark uniform stretched over his chest that he is an Official in some capacity, and immediately requests to check the luggage. The driver steps out as official struts around the car, words are exchanges quickly in Wolof, then a hand full of notes are pulled from the glove compartment. Our bags are not checked.

‘Corruption is a big problem in Africa, isn’t it?’

‘Oh no’ he said loudly, sucking on his pipe. ‘It’s no problem at all. If you want to bribe someone just go ahead and do it’.

The fatigue of my journey soon hits me, but sadly I’ve no head rest to lie on. Only the driver has this luxury, and his has a small fire extinguisher taped to the back, maybe if I had more energy this would concern me. My head flops against the side door window and I witness a flickering stream of African images: 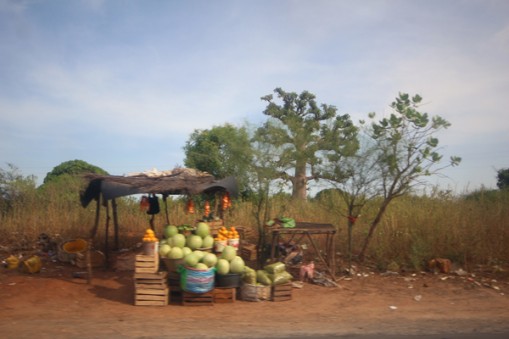 Women swathed in bold patterns carrying great bowls of goods balanced their heads, their swaddled infants strapped to their backs. A young man coercing a horse and cart backwards down the road, the geldings feet forced into a slow reluctant moonwalk. The thick trunked baobab trees, each branch blooming into a storks nest. Goats, sheep and a mud bathed pig grazing lazily between stalls erected from sticks, selling fruits, meat, and as we travel further north, baskets, clay pots and nuts.

We past mile of men working in a trench parallel to the road, wielding pick axes with such strength as mirages flicker and undulate on the road in the mid day heat.

I spot one man working in a woollen bobble hat, a trickle of sweat runs down my back. 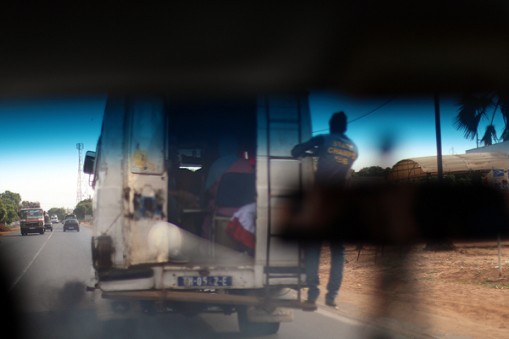 The traffic swells as we near the city of Saint Louis, the waters of the Senegal river lapp along the road edge, a bridge, another, a right turn at the women selling clementines on the corner, and we arrive at WAAW Centre for Art. 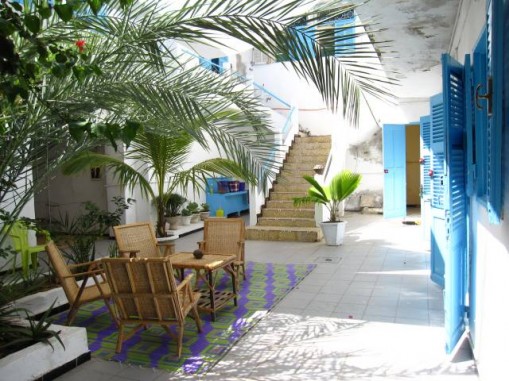 I have the good fortune of a whole row to myself on the airplane. I slump, put my feet up, then indulge in lying flat out across the three seats. However this feels far from indulgent. I’m uncomfortable, and apprehensive.

Iberia rescheduled my flight to Dakar three times, each change eating away into November, before boldly forcing the flight three weeks forward. This left me one meagre day to move out of lodgings, prepare my suitcase and squeeze in as many goodbyes as I could physically and emotionally manage. Abruptly plucked from the breast of Mama Montserrat, and catapulted head first into my new life in Senegal, I’m uncertain what awaits me on the other side, I’m uncertain if I actually packed anything useful.

The visa official at Dakar airport reads my name aloud with slow suspicion ‘ruh-beh-cuh cus-worf’. I assure him its a good name no? He seems satisfied, agreeing with a casual nod and smile. Once granted entry, I’m free to have my luggage rescanned, my passport and papers rechecked, then pass through the main doors into the heat of the senegalese night.

A huge African cockroach runs to greet me, scuttling round and round my feet.

‘Welcome to Senegal’ a man chuckles. 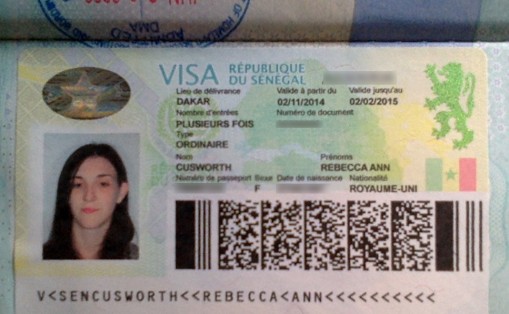