I have been meaning to post this article for a while:

and was reminded to when I got the AIR update email.

The article by Hans Abbing, goes into (among other issues) the fact that subsidies for artists are not the answer for sustaining professional artists.

Whenever I go to a discussion event and indeed, it happened at the seminar I was at in Cardiff last week, someone always pipes up with the fact that artists get support in countries like the Netherlands and Germany (Germany have stopped this now I think). They wonder why don’t we support our artists like this?

The moment more money flows into the arts – whether from more demand (including more public commissions) or support (including subsidies and donations) – the number of artists tends to grow and so does the number of poor artists. In the case of support this is problematic: support leads to more artists being poor while hardly increasing the amount of art that reaches the public.

I really don’t think artists should be subsidised by a general benefits system like the Netherlands – what right do artists have to warrant a use of tax payers money in such a way when our health/education systems need it so badly? I don’t understand why people feel they are entitled to special help either: I want to take responsibility for myself. I don’t oppose other sources of funding like Arts Council – the arts needs some support – but in a competitive field where quality is important, not by career choice default. The Arts Council has always been there while I have been an artist and I suppose I take it for granted. The first time I thought about how much we all depend on it (although I realise it’s not an entirely popular organisation – especially in Cardiff!) was when thinking about the fairly likely event of the Tories getting into power next year. They say they won’t cut funding, but don’t have a great track record.

So I shall have to think on that one as I just take all these systems for granted, I’ve never considered whether they are the best solution to supporting artists or not.

Alan Davey on the other hand, says funding the arts is very good value for moeny:

The article also made me think about where my income is coming from – a few organisations supported by Arts Council for a start, although no direct funding. It’s hard enough to make a living to start with, nevermind stopping to think about the morality of it all.

I found Mr Abbing’s article a pretty depressing (and realistic) read in that it highlights just how impossible the situation is, but the idea of stopping people trying to become artists is a sad one. I also had to wonder if I am one of those ‘In-between’ artists he mentions… I hope not.

Today was one of those days where you think you are simply not being paid enough to go through it: 47 kids and me alone in the school hall, tired and impatient at the end of the day. Sod that. I am insisting the teachers stay tomorrow!! Ugh, wine and bath making it go away..

On a more constructive note, I have noticed something going on in my applications of late. I have been applying for exhibitions this year as they are distinctly lacking on my CV. For three, (that I really wanted to be in) I was contacted by the curator, shortlisted and then not put in at the last minute. When I asked for feedback, all of them more or less said they wanted existing works – my proposals had all been for new pieces (as I don’t have much work in existance).

It seems like this potential future work way of going about things might make you too much of a liability, and of course, when they are galleries with a budget (these were), then they want to spend as little as possible, so transport over production costs/artists fee seems far more viable.

Further proof that I need stock!!

Manchester Artists’ Book Fair is coming up in a couple of weeks (or three..?) on Saturday 7th November. I am really looking forward to a half term off so I can get making some more books and printing a couple of brand new ideas that have been waiting patiently..

Come and see me at my table if you’re in the area..

Firstly, see this website for a great opportunity (ok money isn’t enough for paying off any debts or saving but..)

I have coveted this residency since I was in Edinburgh but have never applied – 12 months seems a bit impossible, not to mention unfair on Dan. Will someone else please go and make the most of it though?

In other news (if you can call it that!) getting up at 5am to get to Yorkshire in time today hurt. I am ready for bed now (8.02pm) but will hang on a bit longer so I sleep well…. Just found out I have five year olds for two days next week so am terrified! I love little kids, but not leading 30 of them in an art class – need more training!!

I keep meaning to say thanks to those who have emailed about the maternity blog post some time ago… I am still getting emails about that one, which is fantastic. Many of the later ones have been highlighting the immense difficulties of continuing your practice (especially in the first year) and coping generally with all the self-disciplined working hours and baby brain.

Now – peppermint tea and watching Howl’s Moving Castle in bed; the kids are going to watch it so I just want to recap (and I love it). They’re a bright bunch this week, but they seem to have had their creativity pushed out of them a bit – for example, upon seeing a house underwater in my initial presentation bit, several of them worried about the electrics and whether the carpets would be ruined. Their self-portraits as houses mostly look like surburbia (there is one boy who has drawn his completely made of BBQ spare ribs), but at least they’ll be easy to make I suppose!

So, joy and proactiveness-spreading here we go..

The carrotworkers’ collective, are a bunch (ha ha, sorry – couldn’t resist) who describe themselves as “a London-based group of current or ex interns, mainly from the creative and cultural sectors, who regularly meets to think together around the conditions of free labour in contemporary societies.”

I met three of them and took part in their participatory mapping project at ‘Making a Living’ in London a couple of weeks ago. What I really like about them is their stance against bad Internship practice and the corrosion this causes in general working conditions. They are working on a counter-internship guide and more about this can be found on their blog along with some great links to other organisations and resources.

There was a really interesting list of resources and references handed out at Making a Living, more of which I will post on here shortly (my blog was one of them so I won’t include that!).

The event was organised by Sophie Hope, facilitated with Veronica Restrepo and held at the Austrian Cultural Forum on 26th September. Sophie’s PhD is about the relationship between cultural democracy and the commissioning of art to effect social change so there is some really interesting stuff in there, have a look at some of Sophie’s action research here: 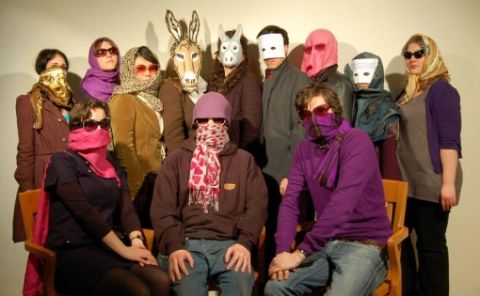