Watching the BBC Four series on Mathematics last night got me thinking. There was a piece about Henri Poincaré, who shaped his working day to consist of two hours in the morning and two hours in the early evening. The time inbetween was for walking and letting his subconscious roam freely. He is quoted as saying “it is by logic that we prove, but by intuition that we discover”.

The result generally, he thought, was sparks of inspiration and better efficiency. Like the two hour lunches in Italy or siestas in lots of Europe (I know it’s not hot enough here) this makes total sense to me. In my life, it’s more like the hours part of his idea is substituted for weeks, but there is the same effect.

Have been trying to follow the Lib Dem conference a bit since yesterday – it worries me that Nick Clegg seems to be becoming a bit of a scapegoat, when actually it is Conservative policies to blame. Watching ‘This is England 86’ also makes me think just how shit the 80s were for loads of people, and I certainly remember a lot of tension and worries over money at home while my Dad struggled with his own business.

People losing jobs as part of the cuts doesn’t make much sense to me when they will then have to go a claim benefits/housing and be more of a drain. I guess cuts to benefits will come just in time to lessen that damage. The cuts feel very focussed on the middle and working class and are missing out a massive point of revenue from the very rich – something that the tories are unlikely to touch I know. Whether the deficit is cleared by 2015 or not, it doesn’t feel like the government are thinking about what’s best for the long term.

Urgh, anyway, sorry about that political aside!

I have finally got a skeleton website up for Cardboard Folly. I’m finding it very hard to put together a journal like this as I keep seeing great work that should be in it. However, time is limited, my resources are certainly finite so I shall have to stop asking people and leave it until issue #2 next year. I think it will be interesting to spread the contributions out next year so I am only working with one or two artists at a time and it develops in a more relaxed and fluid way. The theme for issue #2 is Holes so I already have some people in mind. There I go again, getting carried away with future things before present things!

It is without logo or too much information at the moment, but that is partly what I will be working on next week in the Cooperative space:

Also, egg number one is hatched! (see pic). This is the simplest by far so the others are way more likely to get broken or not cast well, but when my rubber moulds actually dry (tip – use accelerator) we shall see.. 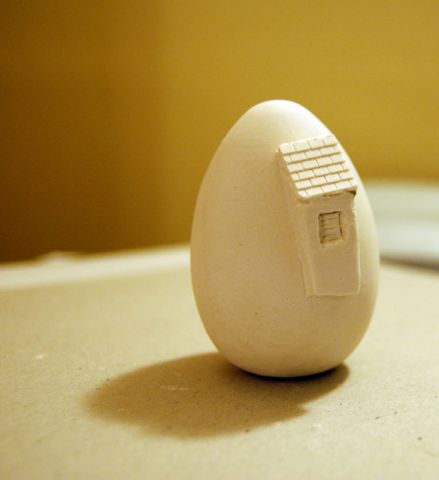 Well, the holiday is gone and I am pretty sure I need to go somewhere a bit warmer next year, a place where swimming in the sea is not painful. Fingers are crossed for some sun in Milan! Still, I read 6 whole novels, spent a lot of quality time with my adorable 4 month-old niece and climbed some hills. The fresh air was much needed.

Now I am back and I am working on my eggitechture casts and press material for Milan for the next couple of days. My week in the Coop starts on Wednesday, so I am also getting prepared for that and figuring out all the content for Cardboard Folly. I am seriously impressed with the stuff coming in, some really great writing from Rich White and Gordon Shrigley and the visual content is shaping up to be just as interesting and diverse. I’ve invited various people to come in and work with me and am looking forward to a rich and varied week! Some of my first visitors will be Piccadilly Projects, who also have a blog on here:

The website should be doing a little something by tomorrow, just making a background tile from a lovely brick pattern from the inside of an envelope today.

In money news, this discussion might offer up some interesting ideas on the FUTURE… maybe

Below is a teeny animation I made during the week I worked at PSL in Leeds last month. I need a) sturdier tripod to stop the jumping and b) to watch the focus more closely! Still, it was great to complete and I have a better idea about how I would do it next time! 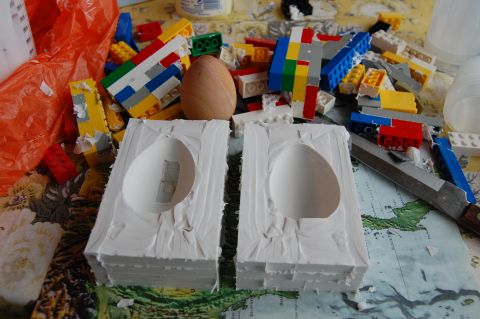 Working from home seems to be a bit of a topic today, people writing on the joy of the walking-down stairs-commute and the hell of self-motivation. Some insightful writing and helpful suggestions on how to work from home and be happy:

and ‘Why working from home is both awesome and horrible’ from Oatmeal. Hilarious cartooning:

Up early for an exciting site visit in Cambridge, a swift sleepover in Finsbury Park and then back up North to be swept off to north Wales for a week on holiday. Praying for a little sun. See you in a week or so.

For those of you who haven’t seen this already (and it has done the rounds, so you may well have) it isa minimum fee schedule from CARFAC.

Director, April Britski is working with a-n at the moment on secondment and also wrote this in the last issue:

Reflectons on the arts funding crisis

How brilliant to have the experience of someone who has been through it already.

I have been feeling a bit out of things recently, which is probably why this appeals so much! I have a habit of setting myself tasks that are just stupid. I decide to do something and then I make it as hard as it can be, just at the point between likely failure and almost possible. Then I am horrible to people close to me while I get incredibly stressed out. I blame it on my dad, for various reasons, but since he is no longer here to defend himself I shall just have to take responsibility for it and stop subjecting myself and others to it. I have worked in this pattern consistently since I was about 17, so stopping is harder than it looks from the outside. It is also a way of making sure I do acheive things and I’m not sure how to function otherwise, but I would like to calm down a bit generally.

August/September was supposed to be quiet time for the studio, but it hasn’t come out like that at all. It has even got to the point where I am feeling like the week in Wales coming up is going to get in the way of deadlines. IDIOT. Anyway, I am going through the obligatory -I-can’t-possible-do-this-it’s-going-to-be-shit phase of a project, so perhaps the holiday is actually at the perfect time. A bit of fresh perspective never did any harm.

I am really really looking forward to going to Milan in October and putting work up for Showreelproject.com. The interview with California-based curator Ciara Ennis is finished and will be in Mousse magazine in October – I think? She was really great to correspond with and her insight into my work was really unexpected and appreciated. I am working on eggitecture for that and it is taking a lot longer than I anticipated, but this is no bad thing, I am sick of quick fixes and it has been pretty calming to file away at minute architectures.I have found myself wondering if a day trip to the architectural biennale in Venice is possible though – there I go again! Why can’t I just enjoy Milan? DOH.

I am off to Cambridge on Friday for a research trip, so excited and intrigued about that. After holidays I have a week here:

to work on Cardboard Folly (amazing work coming in for this!). I have invited various collaborators in to make things/discuss/give feedback really looking forward to some input and company in my work. Then I have been asked to do an exhibition that should be really exciting, although it’s not really confirmed yet, so I shall not jinx myself!