A friend sent me this link yesterday:

basically he defines the FRAUD COMPLEX; something I think a lot of people suffer from, especially artists (me included). It’s difficult as there are hardly any measureable successes in this business, so if you do well, sometimes you can’t pinpoint why exactly and there is no guarantee of replicating that. Everything seems subjective and uncertain and precarious and so on ad infinitum….

At a discussion group at Royal Standard last month – about what inspires us to make – the fraud complex business came up and most people nodded a bit.

In the blog post, he defines knowledge by shit you know, the shit you know you don’t know, and the shit you don’t know you don’t know. I have a lot of the middle one; shit I know I don’t know, which can be intimidating, especially when you presume everyone else does know it. This often leads to not trying things or writing off your best ideas before they have chance because you presume you will probably fail. It also means that you know something isn’t right, but you can’t necessarily fix it. I have this a lot when I read back through things. I know it’s not right, but I am me and I will probably write the same thing again, even though my head tells me otherwise.

I keep looking at the Arts Council consultation and trying to do it… but there’s so much reading to it and I have too much report writing to do for YSP at the moment.

You can have your say until 14th April. I will do it, I will.. can’t really moan about artist not being represented if I don’t can I?

Jack Hutchinson had tweeted some interesting stuff about internships when I had a look this morning. The BBC have done a report on the growing number of unpaid internships (in all professions). They reckon 90% of internships are unpaid and 60% of interns say their experiences were in no way beneficial.

That’s not great is it? They interviewed one of the founders of Interns Anonymous, so get adding your experiences on there if you have anything to say:

The Arts Groups have just launched a report on internship called ‘Emerging workers: a fair future for entering the creative industries’

As for me, I am having a slow morning today, partly because I couldn’t get up! Husband left me in bed so was a bit disoriented when I finally woke!

Went to Blackpool to do a talk on my work to Illustration & Fine Art students yesterday, then I took a small group for an artists book workshop in the afternoon. It was lovely and they came up with some very clever and thoughtful ideas. There was talk of whole bookbinding day at the beginning of the year on October, which would be great for them. I also had some really kind emails waiting when I got home, from students thanking me, thanks!

I also popped in to the Grundy gallery while in Blackpool to drop off a CD of images from the Collaborate & Make project I did there in January. Their current exhibition ‘Magic Show’ touring from the Hayward is worth a visit. Sinta Werner has been commissioned to make a site-specific piece and it’s awesome! She is the next artist in the Showreel series in Milan that I am doing, so I was keen to see her stuff. I think Alice Channer’s work, which she showed at Showreel in Milan back in December is in Frieze next month so I must remember to buy a copy…

In other non-art related news, we have a cat. She is lovely, but mainly under the sofa at the moment. She is adopted from a friend and very nervous. She was living with three basset hounds so is stll waiting for the dogs here and is very suspicious of doors. Hopefully we can give her a non doggy life where she can chill out a bit! Luckily Dan is a cat whisperer so they are already firm friends. 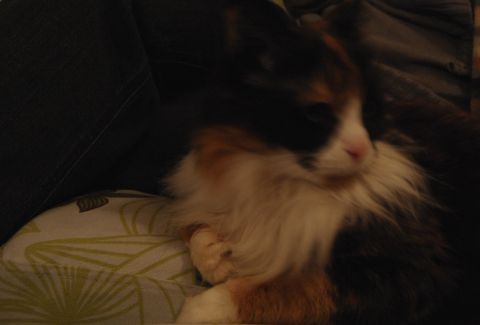 The postman has just brought me a lovely package from a-n, my prize for being one of the blogs of the year. Inside was a copy of Rachel Howfield’s artist’s book ‘What a Waste of a Day’ and an extra surprise – a pair of knickers!

I should fill in some background here. It started with a group friends from uni (eca), four of us that used to always buy each other knickers as presents. It became a bit ridiculous so that they would get more and more elaborate until they were festooned with ribbons and bows and ruffles and patterns to make your eyes bleed.

When I was doing the residency at Hospitalfield in Arbroath we had to use the laundrette. I found out near the end that I was known to the staff as the knicker-lady. One of the elderly women who did the folding said to me that I had the most incredible collection of unmentionables she had ever seen. A great compliment if ever there was one. But I believe these small things can change the way you feel and make a difference to your day, laugh at me if you want, I don’t care because I have ribbons.

The pair from Rachel come with a tag for hanging instructions:

· Pin to the wall

· Hide in your knicker drawer

· Drape casually over the back of the sofa

I’m wondering whether a knicker wall may come into being…

Incidentally I am off to Lincoln this weekend for a reunion with said Edinburgh friends so the post feels very timely.. I think I may have to pop to the shops before I go!

I should also mention that sewn into the gusset there is a tiny panel with a picture of a fire sign saying ‘Fire hose keep clear’. Excellent stuff. Thanks Andrew, a-n and Rachel! 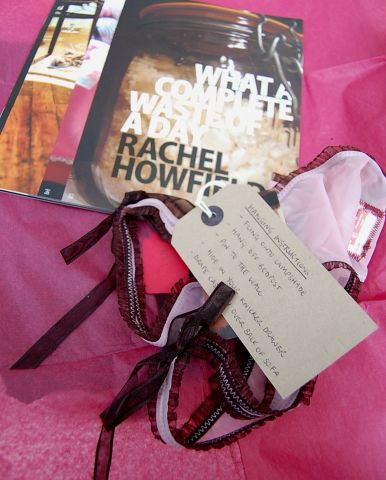 I am a little distracted as I have just discovered a secret bit of recording at the end of one of the conversations with an artist in the Salzamt.

I go out of the room and I presumed that was the end, but I just left it playing today and found out that was not the case! Jens must have picked up the phone recording us (it gets very loud) and he’s giggling and making lots of sound effects, mixed in with some swearing followed by ‘shit, she’s coming back’ and clang goes the phone back on the table. Made me miss him a lot and I have also been laughing heartily.

Also found out we are getting a cat on Monday! Very excited. This is my friend Tracey’s cat who is being adopted as she has to live with three basset hounds at the moment! She is extremely fluffy and will hopefully enjoy the surrounding fields and being my companion.