Recently I have been quiet. I have been trying to figure out why I don’t feel like saying much or getting involved in conversation. I can only conclude that I have been knackered and it has been a case of self-preservation. I don’t think I gave myself enough chance to recover from YSP, initially thinking that a few days would be enough. As it was I just couldn’t help myself and went into the studio and worked pretty much as normal. I don’t seem to have an off button unless I am somewhere else. It’s also like the saying, if you don’t have anything nice to say – same applies to not having anything interesting to say.

Then I went to London for five days. Amazing, nourishing, exciting and inspiring to see a ton of art, catch up with friends, buy paper and see new babies. But by the end of the trip, the sore throat and bad chest were back (I had bronchitis as the end of the YSP project), a sign to just stop!

Anyway, I got back on Sunday and have had trouble getting out of bed since. I have been going into the studio, but the pace of work has been pedestrian at best. Today I have physio (from a car accident last month), doctors and dentist, so a great reason to have lunch with my Gran, see my little neice and not drive more than 4 miles. Lovely.

It has been good to just read other people’s blogs, and although I have added a couple of comments here and there, it has felt like listening rather than talking all the time. There has also been a lot going on with the arts in general and the funding cuts. I have been reading a lot and I don’t know whether I am a little slow – but I feel like I can’t absorb it all just yet.

I was glad to see AIR putting a request in for an artist representative at Culture Forum, kicked off in part by Katriona Beales’ excellent post on artsfunding I think? The Guardian has been publishing a number of feisty pieces on the subject (often the best writing is on the theatre blogs), with some statistics that really put it all into perspective (Arts are half a pint of milk a week per person apparently…but check I quoted that right!). Some interesting links below worth a read:

Will Gompertz on cuts:

DCMS has launched an inquiry into funding of the arts and heritage. You can add a written response, guidelines are outlined here:

For the first time yesterday, catching up with whats on in the world, I got a bit annoyed about a discussion on artinliverpool.com; artists talking about the Independents strand of the Biennial. So much expectation from them and so little understanding of the reality of the work involved and the bigger picture… I couldn’t help myself and had to add something to the comments. That felt better, a bit of anger is a good thing it seems and often my impetus to get involved. Hopefully it is a constructive anger and getting involved in discussion is a useful way of dealing with it!

This argument is a little esoteric, but I think it’s pretty revealing to the way in which artists expect things to be done for them – there is a feeling of entitlement going through the comments that I don’t empathise with at all. Scroll down to comments:

Some London reviews and future scheming to follow soon. But I need another cup of tea now. See you soon.

Got the folders… massive phew. But they got delivered along with five other people’s orders. I really hope those people hadn’t planned a book launch for tomorrow!

Anyway, book production factory in progress (see pic), done about 30 so far, which may have to do for now. Also putting presentation together and cutting cardboard triangles out for the audience to make geodesic domes with. I like a bit of practical in my celebration events.

One of the best things about the bursary with YSP is the food – looking forward to lunch and squirreling all the leftovers tomorrow :D 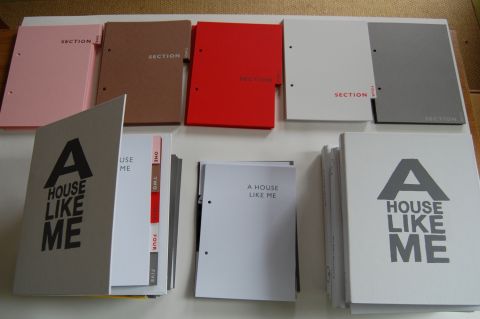 Met a lovely guy yesterday, a letterpresser living near here with the most amazing shed/studio. Shtudio? Anyway, see picture for all it’s glory. He said many wise things, one of which was ‘it doesn’t matter what people say they can do, or will do, it just matters what you see being produced’. I liked that, especially because I can get panicky when people seem to be doing amazing things and I worry I’ll get left behind. Often I realise (way way afterwards) that it was all just hyperbole and was never going to materialise. I always forget the pinch of salt.

He also talked about generosity and the fact that his knowledge and collection didn’t really belong to him, but that he had a responsibility to leave it for future generations. he also offered the use of it for future projects, which fills me with utter excitement.

This mention of generoisty reminded me of a conversation I had with Jude Kelly at the art prize awards. She was talking about the fact that artists must help each other out and be as generous as they can manage. She’s right.

Now, back to YSP book. Bloody covers are still in the post somewhere (seriously – I have to take them on FRIDAY MORNING!!) and I have more screenprinting, cutting and assembling to do. Goodbye. 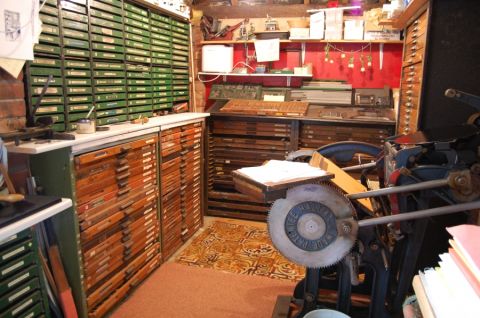 If anyone has ten minutes, please complete this survey on how artists make use of internet. This will used for postgrad research and the deadline is July 10th.

It’s an interesting area that I’m sure I could be better at (I have been sticking with my safe website design for quite a while now..) Just, please, artists, don’t put music on your website!

It’s July. This means that I have finished my cataloguing work FOREVER. I’m sad and a little anxious about the safety net it provided (a teeny one, but there nonetheless), however, I have to acknowledge that it has always stressed me out and I’ve often left it all to do at the end of the month like an idiot. Last month I left myself 166 cataloguing hours to do on top of doing the book for Yorkshire, being in schools and several other projects. I have been racing home from school workshops the last few weeks, getting on the computer and staying on it until midnight or late and all weekend, and getting up at 6.30. Now I have completely lost my voice. I am coughing like a 30-a-day smoker. Worst thing; IT’S MY OWN FAULT. I MADE THE DECISIONS AND DID IT TO MYSELF.

The fact that I have done it to myself is one reason I am so fed up of hearing my own complaining. So it has to stop. No more. I am going to oooze positivity from now on. No, I am, really.

Another thing that is done and dusted, is the Liverpool Art Prize. It was the awards last night and I was dreading driving back from Yorkshire for them and getting up again at 5am today. I didn’t win any money, but then I wasn’t too surprised about that as I have said before. I did have some nice chats with people though and got some feedback and requests to keep in touch. I did, however, feel like crap and couldn’t talk too well so ended up missing the after-party in favour of a hot bath and bed. I don’t want to end up with a chest infection or similar.

Ian and Minako (the forces behind artinliverpool.com and the art prize) handed me an envelope after the announcements – with a cheque for £400. They had some extra sponsorship and decided to share it among the artists – truly everyone was a winner :D Glad to be able to pay for my van tax – due today, as well as being reimbursed for my materials. No payment for time, but I would say the benefits of the show have already more than outweighed that fact.

Most importantly, it is amazing to have the whole judging malarky out of the way. It has been stressing me out, no matter that I felt sure of the result, it’s just the weight of it all and the not knowing. Not feeling massive relief yet, and I still got back to my hotel room this evening and turned the laptop on immediately, before realising I don’t have to.

I pick up the pages for my Yorkshire Sculpture Park book from the printers on Monday, so next week will be screenprinting, assembling, cutting and a different kind of workload. I am pretty anxious about what the reaction is – I’m not used to being wholly responsible for something like that – especially when it has the institution’s logo on it and an ISBN provided by them. Not to mention the fact they have paid for it all. Exciting too, but bloody nervewracking, especially with the hand-made element… the screenprinting could bugger up completely after all!

Right, I’m going to do.. er not much actually. To be mainly horizontal perhaps.