I realised yesterday that I am shattered. This week is for writing the YSP book (only about 2,500 words – so not as horrendous as it sounds!) and cataloguing. I am glad to be able to work with tea and kitty and in pyjamas.

Going in tomorrow to photograph the installation I made for the A Foundation show, the image here is one piece of it, without its friends. The opening gave me a lot to think about, especially as it was clear my work needed explaining to some people. I don’t know if I care about that, I don’t think it’s that important in some ways – I think that might be a product of being constantly given lots of explanation and expecting that. The work has a narrative, but a gray one – it’s not entirely clear yet even to me, as it is all work in progress. I still hope to do the performance I was building up to, which is actually a drawing (just with the aid of a costume and my body). I think I have to do that in private, it was all a bit much thinking about doing that at the opening last week. Same goes for the Liverpool Art Prize exhibition… not sure I am up to it yet?

Anyway, I’m sure it will become a bit clearer in hindsight, in the meantime I have a big structure to plan for the LAP show. Might need to use village contacts for a bit of advice there – pub later then! Last weekend I managed to burst a tyre and twist the metal underneath the car on something on the road… so that has been an expensive lesson (and a shock). It means I am village-bound for a while anyway, not a bad thing. Financially a bit of a disaster, but these things always happen as you think you’re getting sorted don’t they?

Better news – my twin sister is currently in hospital and a baby is imminent! So, most likely all these worries will seem silly when I go and visit later :D One very small, soft, comedy bear suit at the ready….. 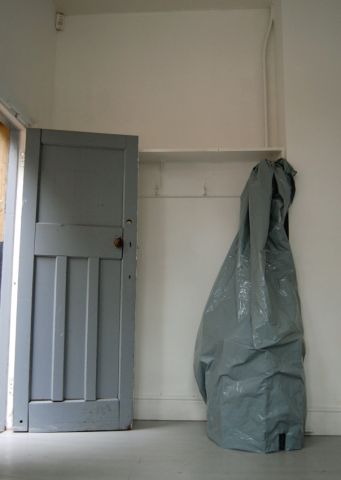