The collaborative project that I am involved with is approaching its conclusion, but somehow this last stretch is proving difficult.

My poet collaborator’s poem has placed my ‘hoard’ of objects fashioned from goose bones as belonging to a water culture that lived by the sea.

Although I like the poem I am now finding it hard to relate it to my work.

I only realised how difficult when I found myself rethinking the presentation of the work. We had discussed it being presented in a museum case or on a museum exhibits tray, but the poem now seems to ‘float’ separately.

Is this disjunction ok? Does this mean the collaboration is in some way a failure?

This type of long distance collaboration with both partners committed to both the collaboration and other projects was always going to be fraught with problems. Doubtless both will bring unspoken and maybe even subconscious expectations, and doubtless both will disappoint the other in some way. Without the trust and intimate knowledge of the other that is forged with, say, a studio partnership how to overcome the politeness of acquaintance communication/interaction to ask the other for more or different or less?

We have decided to exhibit the work in a large modern fish tank, neatly sorting many of the problems inherent in our venue and I am presently hunting acrylic boxes and blocks for the interior.

This has also necessitated the manufacture of another work to manage the space and a search for a solution that would anchor the poem to the work.

The poet has responded to my work and I find that I am now responding to the poem in the presentation. Interesting and unexpected.

Today I spent the day with net and fish bones but I am pleased with the resultant work.

Without the poem conundrum this ‘net’ work would never have come into being……….yet again being in an uncomfortable place has pushed my work into an unexpected outcome. 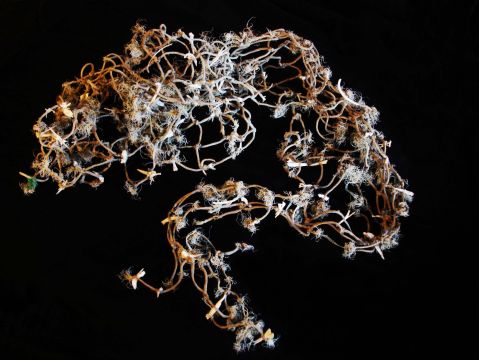 Interesting thing about the internet of course is that out there in the ether I shall be 56 and a half for ever. Maybe I am on to something here…….digital eternal youth………..

I did have a weird internet moment recently. When looking idly at the website of the poet I am collaborating with I was shocked to see my name. By mentioning her on this blog I had inserted my name on her website.

A reminder of just how careful one must be; and not the first one.

I once came across a comment I had made about Dartford reproduced on a website that I was researching. At the time I was asking for funding from Dartford Council!

Nothing amiss had been quoted – but it was a timely wakeup call. As far as I am aware, however intensely embarrassing, there is no way of removing anything from the net?

Internet etiquette for example……..the imperceptible slide from ‘Dear’ to ‘Hi’……….and the sudden realisation that you are now just plain wrong.

E-mails getting shorter by the day as half of each word gets swallowed up by text speak……….everything in life nowadays needing to be shorter, quicker, more impatient. How come the older we get the faster time goes? What is that about? When young we seem to wait an unbearable time to get to be 16 from 15………

Sometimes you can get an unintended internet laugh. Following a missive from an Arts Officer advertising workshops I promptly got another from an artist on the list – asking if anyone could give her cleaner’s friend a job. Sent to [you guessed it] everyone on the Arts Officer’s mailing list!

I did subsequently toy with the idea of a project based on subverting other peoples mailing lists………..

I finally discovered that my Tallit work had been torn from the exhibition wall – in front of the Arts Centre staff – by someone known to them for their challenging behaviour.

It had been rescued and stored for me and was shortly restored to its rightful place where it hung without further problem until the end of the exhibition.

My work was in the form of the Tallit – an undergarment worn by orthodox Jewish men. It takes the shape of a four cornered garment with a long fringe at each corner. The fringes when fingered are there to remind the wearer of their religious duties. Although my Tallit was sewn from a bed sheet I taught myself to tie the ‘tzizt’ or fringes according to custom so as to give the ‘garment’ the respect I felt it was due.

The work is part of a series called ‘Kaddisch’.

Kaddisch is the ancient Aramaic recitation said on the death of a family member. My grandfather died in a concentration camp and so Kaddisch was never said for him. These works stand as Kaddisch for both him and other family members lost in the Holocaust.

Yad Vashem is a huge memorial collection of names and information posted by relatives of the dead. I replicated in pencil on the bedsheet my grandfather’s entry of death and his portrait photo.

Above this on the garment are what appear to be coloured abstract patterns. These were the tags worn by camp inmates. They designated the persecuted group they belonged to – Jewish, homosexual, gypsy, disabled…… Below that is an extract from Goering’s speech in 1938 and a contemporaneous diagrammatical attempt to prove Aryan racial superiority using Mendel style ‘science.’

It sounds complex but it presents as simply a T-shirt until studied closely.

This is the way I work: always attractive and approachable but with an underlying darker narrative of memory or memorial. In this case I had hoped that the numbers on all the documentation would resonate with the viewer– a vibrant life reduced to lists and numbers.

The incident has however made me consider the content of my work and its place in a public space.

How would I have responded if the perpetrator had been Jewish and objecting to the form of the Tallit even though the message on it was of man’s inhumanity to man? Or possibly someone who objected to the words ‘concentration camp’ as being unsuitable for the space -an Arts Centre exhibition wall alongside a cafe? Do my rights as the artist override any offence my work causes to its audience and if so why? Does the fact that it is ‘art’ make it inviolable?

Had I put up the entry from Yad Vashem, the speech from Goering and the diagrams with an explanation and then presented it as a history lesson in this space would I still feel it appropriate?

I guess I might think it an odd choice – yet although I do realise that the bed sheet format of the works we exhibited and the content of my work might challenge this audience, I do for some deep seated reason, still feel comfortable with the same information presented as an art piece. Why?

Interrogating ones history is of course an area of practice that offers an artist the integrity of experience, insight, awareness, perception, and hindsight. No wonder it is well mined in every creative media.

Autobiographical work is familiar country for the contemporary artist. Maybe I should be taking heed of that word ‘contemporary’. Autobiographical artistic musings were not much in evidence pre- Freud and certainly a section of today’s artistic audience would still consider such navel gazing to be an arrogant irrelevance to ‘painting’

It is – I think- in part the current political atmosphere where protest and our private lives are being scrutinised by ever more governmental forces, combined with the sudden combustible nature of Religion in the bigger sense, that makes for my feeling of worry, concern and insecurity.

Interesting – especially in the light of my subject matter.