I haven’t found the energy to blog over the last few days…..my mind needed a sit down.

On Friday members of the art forum I run went on an awayday to Margate.

Force 9 gales and that exhilarating smell of ozone permeated everything.

A great exhibition from Tracy Emin in the Turner. Awash in blue gouache; intimate and vulnerable as always.

Having spent time in the exhibition and now with the audio round my neck – having been told it was worth it – [which it was] I looked up and there was our Tracy. A bizarre jolt of recognition and then a ‘do I continue into her path or not’ conundrum. She proved friendly and engaging , signing programmes and posing for camera phones before disappearing off again.

It was strange to continue meandering on afterwards, peering at depictions of her sexuality. Her work seems to confide her intimate secrets but many have mirror writing – the reveal facing away from her audience.

A group of work done in 2011 around an affair I found deeply moving. I can see some of the work clearly even now. A sure sign that it reached me in some way.

In a later set of work done after the split she depicts them both in bed; she is clutching on to the side of the bed in a foetal position – taking up as little room in the world as possible. In another she dreams he has returned. She is again on the edge of the bed. This time physically closer to what I presume is her cat Docket than her lover.

She says she has given up and now feels free of the need to find a lasting relationship. Sadly her work seems to offer someone unable to commit.

Supper was taken at the end of the Harbour Arm; a wild sea on both sides. Then on to visit the Margate gallery to see if our WinaPrint tickets had won one of the amazing prints on offer – mine of course hadn’t.

The gallery had organised a live Arts Council feed from the Turner of Tracy Emin and Stephen Fry in discussion. The tickets had sold in the first ten minutes, so we waited expectantly.

A sad disapointment. He was unprepared – called her bed installation ‘Everyone I ever slept with’, told her she had lost a lot of work in the Momart fire [she lost two] etc…

He then tried to offer psychoanalysis around her childhood abuse and subsequent behaviour. She, [and we] became more and more uncomfortable until she said with geat dignity – ‘I am going to change the subject’, and talked about her cat.

The highlight was her charming defence of Margate at every turn, her deft handling of his lumbering inability to give her a platform of any sort and her vision of her home town with the neon signs returned, the lamposts festooned with lights and Dreamland and the Lido as extrodinary as they once were. 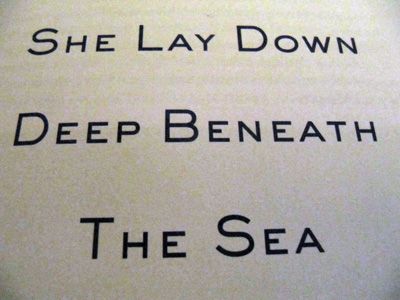 Interesting comments on the label conundrum.Thank you.

In the event I have only labelled four out of 21 works…and I also have a short artist’s statement up. I feel very comfortable with it now. Feels right.

Yesterday I finished off the hang – glass cleaner, plinth painting etc. All done.

In the evening a fellow artist and I went to our old college degree show. Some really strong work and a great buzz. My car still wants to turn left when I get to the college motorway slip road. I would be happy as a skylark to be given a space and just settle back into working there again.

We both spent the night chatting to the tutors. Strange how relaxed and easy it now is. No longer the tutor/student relationship but still imensley valuable to talk things over…

Our only sadness was that neither of us won any of the tutors work in the raffle. If only.

Got a preview of the Hastings Museum programme today. I show there in September with Telling Stories and they have chosen to use one of my images which felt good.

Interesting I thought that the last programme didn’t seem so productive. I wondered if he just hadn’t been granted the same access – maybe people wondering if they would be made to look foolish.

I love listening to his voice..have heard him lecture and have heard it boom across a gallery…such a deep macho voice for a man with an alternative female persona.

Maybe he should record an inspirational CD for all us artists staring out of the studio window at yet another wet afternoon.

Can’t believe its the shortest night/ longest day…where is the year going? I had all these ideas for new work, submissions… 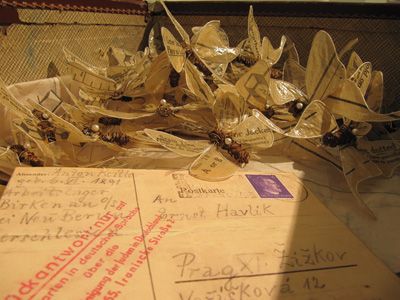 All hung. I took too much work and had to bring some back. Some of my work is quite powerful – in the sense that it appears quiet but deals with difficult stuff. I always think it needs plenty of think space around it.

Space still has plenty in it. Maybe too much.

Solo show – grown up stuff and makes me feel responsible. I have been doing a lot of group shows and collaborations. Here there is no one else to blame!

Plinth painting and labelling tomorrow – so I am curious to know what my initial feeling will be as I enter the gallery space. I am always trying to catch it out so I feel like a visitor would.

Several art centre visitors wandered in today; seemingly unfazed by the ladders and general work in progress. Still, I was happy to let them wander as I wanted to see how they reacted.

Labelling. Always a problem of mine. Don’t and it all looks so much more sophisticated and you know that all will approve. Label and you are immediatley in choppy waters. What and how much information?

I have taken the view that this audience; many coming in from the theatre or the cinema will engage and stay, enjoy and take away more if I label some of the work.

So – it was with interest that I watched two visitors today stop at a work called Postcard from Auschwitz.

The installation piece [on a plinth] consists of two cardboard suitcases, inhabited by an uncomfortably large number of moths made from dress pattern fabric – on folded clothes made up from the dress patterns. Amongst this a postcard sent from Auschwitz.

They both paused to read the following:

The Nazis engaged in many deceptions to deflect rumors and reports regarding the liquidation of the Jews. One such method was named Briefaktion (Operation Mail). Upon arriving in Auschwitz, the victims were required to write postcards or letters to home indicating that their resettlement was fine and they were in good health. All these cards had the same return address: Arbeitslager Birkenau, bei Neu-Berun, Oberschlesien. In contrast to prisoners in other camps, these new arrivals were not registered or given inmate numbers. Shortly after writing these postcards or letters, these individuals were killed.

The couple sought me out. They talked and the woman asked permission to take out the postcard which she then translated into English…the man shook my hand as they left. They were engaged and moved and are coming back for the private view.

I have no doubt that no label would have been no understanding and no engagment in these circumstances.

I am not advocating always labels , but sometimes labels…

The oft heard ‘not sure what all that was about’ seems such a sad and unecessary comment and makes me feel like a witholding parent. Like a power play.

What fun.My blog is no.eight in the a-n top ten. Any one any idea how many blogs there are? 20?!

Very strange idea that 15,000 hits have been made without me knowing, without leaving a trace. What are you all thinking?

I feel I want to welcome you in some way; – HELLO! Come round for coffee….

Today has been sorting the last bits for the exhibition. I hate comments books but like all of us do rather like the feeling that someone has been to look while I was away. Had a brainwave today and have purchased a load of brown luggage labels and a stationery spike. Write on the label and spike it.

I shall leave the tie strings on just because I think it looks wonderful.

Hopefully any youngsters who usually feel the need to scrawl obscenities all over comments sheets will realise that I can junk it and won’t bother. Always a problem in public space exhibitions… 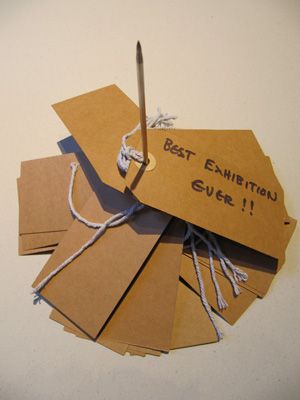 Ha …we don’t have to hand the horses back yet – this weekend has been cancelled – probably wisely – due to the appalling forecast.

I have to own to being a bit pleased – if sorry for those that had organised the weekend. The horses have been invited to Margate – to the Lone Twin Boat Project celebration when the boat docks on July 15th weekend. Definitely party time….we would have been sad to have missed that.

Strangely we have taken the project all around Kent during the year and its only now that it is getting the recognition- just as we have agreed to return the horses to their makers. Its been a slow burn.

Three days now before I have to put my exhibition up.

Typically I have finally got down to a work that has been perculating for a while. It showcases shoe soles that I beachcombed at Dungeness. I think they are very beautiful in their own right – and sad and silent.

They speak to me of journeys but their derelict state also speaks of abandonment or aloneness.

They have become a work called ‘I let go your hand’ about those early love relationships where inexperience rendered the journey too hard to complete, but that still haunt us in some way.

For once in my life I can say I really like the work. Usually it takes me a while to be sure.

Lets hope its a good omen. 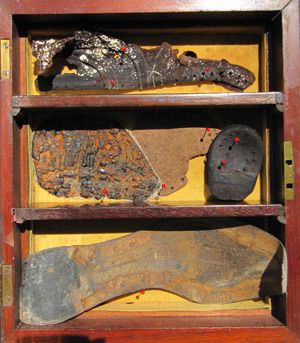