I have put a call out for moths. Wrong time of year I guess.

Now this is very strange. Maybe because I have been working so long on my big triptych where each insect found is drawn, dated and given a new status in the world I feel this would in some way be cheating. It feels inauthentic.

Strange because this new work is so different in my head; a specimen box of moths, not pinned or recognisable by type, collected, drawn with love but presented as found; vulnerable, damaged and abandoned.

Ok…. Have thought and come back to this. It’s because the work is around young girls who died from TB far from home and were buried in the crypt. It’s their individuality that I would be disrespecting. Not sure why this wasn’t immediately obvious. Two works feeding into each other maybe. Usually an unconscious sump of possibilities but maybe I need to question myself here. Need to have that dialogue with the work where I ask it what I think I am doing……

One of my tutors used to say that work either had or did not have integrity.

Integrity – my watchword. I do believe one can see integrity in work, be it the Sunday painter or the London gallery…………….something to do with the honesty with which the work has been approached and wrestled with, something about not taking the easy road……… 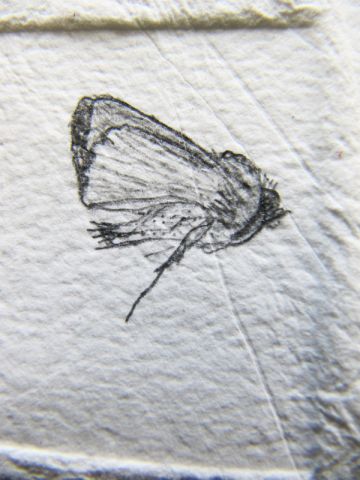 Project Three: The Farningham Hobby Horse Project – quite unlike my other two projects this one is bright, colourful, crazy; a collaboration with artist Ros Barker working under the name of ‘FROS.’ We are both installation artists working with memory and memorial and have worked together before. A lot to be said for working relationships that have been tried and tested. I work best in collaboration I have discovered – I miss the ability to talk out ideas with someone who has a vested interest in the outcomes when I work alone.

This community project has now been running for six months – originally KCC funded and part of the Kent Cultural Baton it has developed into a yearlong project and is taking up more of my time than is healthy for either my work life balance or my other work. It is however massive fun and audiences love it, which when you work with the darker side of life as I do is quite a change.

The project was to re-make an ancient horse fair on its original village site by asking an entire village community to make a hobby horse. We had no idea if we would get six or sixty or how engaged the village would be. In the eventuality we got 120 quite amazing horses returned to us.

Following their launch they are now on their way round Kent – Whitstable Oyster Festival last weekend, Folkestone Triennial Fringe and new venues coming up ………. this is however the only project I have been involved with which could do with its own PA!

How does one deal with these runaway projects? Even with two of us this is enchanting, infuriating and administratively top heavy – every day hours on the laptop, phone calls and endless thought time that creeps into my driving and shopping opportunities like a thief.

Project Two: Last week I visited a lovely artist friend of mine at her residency in a crypt in Hastings. We both have respect for each other’s work and keep saying we should collaborate on a project. Generously she has asked me to join her for the last two weeks of her residency. It is always so special when an artist you admire validates your work in some way. Now I feel I don’t want to let her down…..

She is working with the story of young women who visited Hastings for the ‘sea cure’ for TB. Some of who died there, young and far away from home.

So yet again I shall be drawing – moths this time. Universally symbols of the soul they seem to match with the muted colours of her work and to belong in an underworld. Now I am trying to decide if I will draw one moth 60 times or differing ones. As I have about two weeks to do this in I will be up against the wire.

Why do we do this to ourselves? I don’t know an artist who doesn’t overextend themselves, take on too much, can’t say no if the project is exciting enough………

Something about the way a dead moth has its legs crossed reminds me of the medieval tombs of praying knights. I can see them in serried ranks on my paper. Strange how ones visual memory works. 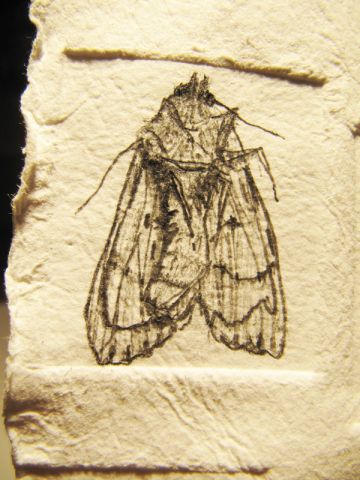 Well, well, here we are again….

Three projects on the go this time. I did think about doing a separate blog for each but somehow it seemed like just adding even more to my overheated brain.

I am hoping the blog will help me separate them out and see where I am going with them all.

Project One: Memorial to the Unconsidered…..I have been collecting and drawing found dead insect for nearly a year. I draw them life-size, in pencil, onto an Imperial size piece of paper. It’s St Armaund’s handmade Turtle –white- with embossed squares of differing sizes laid into it. I have grown to love working with its fineness over the time and am now completely spoilt for anything else. Under each insect I write the date on which it was drawn. In my mind I have always seen the finished work as a triptych – three Imperial sheets framed like an old altarpiece,,,,,,,, I had no idea how long it would take when I started. Just forever I now discover. I have now drawn over 200 and another 60 to go on my first piece of paper.

There has been a recent panic when I found Falkiners had only ordered smaller sheets of my paper this time. All is saved though as I have made friends with someone in the French factory who is going to hand make me two sheets and send them over. I sent him images of the work and he loved them – and I now love him as he has saved my project for me. Memo to self – buy the paper you will need while you can even if you have to dip in the piggy bank.

So – project one rolls on like a sort of background hum………….I do some drawings and then get side tracked for a while until guilt brings me back to the drawing table. Then I get all involved and then called away yet again……… 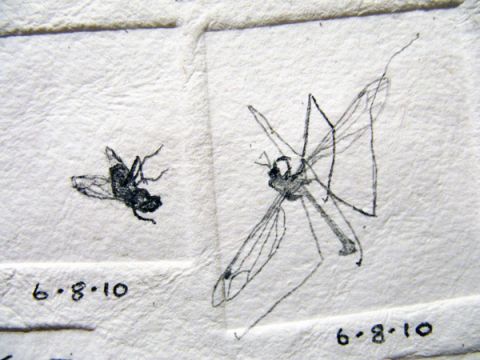