On Sunday, I’m travelling up to Leeds to drop off my work at the Basement Arts Project for the exhibition SPEAKEASY: art in an age of prohibition : http://ageofprohibition.wordpress.com/

I had been working on a series of images about words – how they are used, mass produced or misinterpreted, so the brief for SPEAKEASY was quite appealing to me.

I will be exhibiting Declaration.

I became interested in this particular document because of its mass produced nature. The original July 4 United States Declaration of Independence manuscript was said to have been lost, and therefore all copies that we are aware of today have allegedly been derived from this original document.

After copies were widely distributed to the public, the initial purpose in announcing independence was ignored.

The work, like the document, is so mass produced that it fades and loses its original significance, yet the paper and wood are stacked and overlaid like documentaries, waiting to be unlocked.

The repetitive nature of the words lead us to lose concentration and drift off so that background sounds begin to interfere and break through.

Lost in the script, in the tangle of words, is the statement of human rights:

We hold these truths to be self-evident, that all men are created equal that they are endowed by their Creator with certain unalienable rights, that among these are Life, Liberty and the pursuit of Happiness. 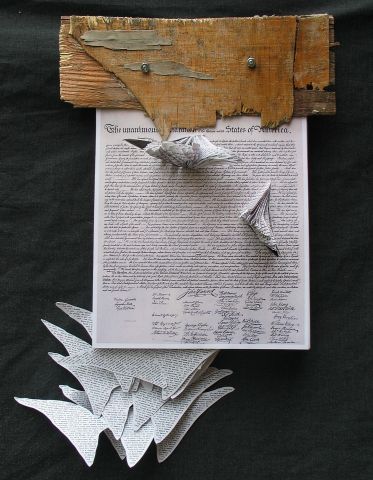