Apologies for doing so many blog posts  this month…its a novelty having so much ‘free’ time, and subsequently, because of this extra time, I’m able to involve myself in so many projects.

I left the last post about to attend the PV and First ever staging of Mina Loy’s Collision (1916) performance at The Bluecoat:   http://www.thebluecoat.org.uk//events/view/events/3287  followed by a Performance by Mary Hurrell with Kitty Fedorec.

I haven’t seen a performance artist for a while,  so seeing three  in one night, was quite a treat. The gallery was packed out and it seemed to have a real party atmosphere. Well done new curator Adam Smythe!

Saturday. I went down to the studio to meet our latest artist in residence, Harold Offeh. At the time of meeting, he was sat in the ‘All Nations’ hairsdressers taking photographs of the very chatty stylist and her customer – who didn’t want to be photographed without make up, so borrowed a huge pair of sunglasses.  The three artists in residence will be exhibiting their work in their placement venues on 5th March, so I can talk more about them nearer the date.

Sunday, I was meant to run my 2nd workshop at the studio. I’d had two bookings and a few emails from people asking if I could do it a different day.  To be honest, I felt it just wasn’t worth me spending a whole day preparation just to pick up £20 from the people who would attend on that day. So I cancelled it.

I’ve rearranged the date, but I’m really not sure I want to do it now. Its such a lot of effort for so little money.  It isn’t a good way of earning a living.

Monday…  I went over to Garston for a meeting with East Street Arts. I’d been working on and off with them on their temporary spaces project and this meeting was to check out a former Co-op that they’d recently acquired.  It was a HUGE space.  Whoever take this on as a studio, is very lucky!

The rest of this week has been spent discussing ways of raising cash to do the art fair in Athens and chasing up a couple of venues for a possible art sale/auction, finally putting the transfers on my ceramics so that they can be fired and still pushing our current exhibition so that we still get visitors http://www.artinliverpool.com/review-patterns-in-poetry-exhibition-at-unity-theatre/

I’m coming to the end of the first week off from work and although it seems to have taken a while, I’m really starting to settle down and relax.

Perhaps I shouldn’t have spent most of yesterday watching TV and reading, but  it was cold and wet, I’d taken the dogs for an hour long walk and the week had been busy.

I’d been told by another artist that we all need that ‘thinking time’, and I agree.

On Wednesday afternoon, I stood outside Liverpool’s Lime Street Station with a crowd of others to watch the big screen opposite. It was the first of a ‘series of interruptions that urge the public to stop and ponder questions surrounding consumption, money, value and exchange’.

It was a really interesting project and it was funny to see the reactions of people leaving the station. Why are all of these people here? What are you looking at ??

Although I’ve really enjoyed the freedom to do so much these last few days, every event has made me question so many things…

On Tuesday, I went to a LAN meeting (Liverpool artists Network ) I didn’t witness any networking, but then,  I’m guilty of that too as I’d met up with a couple of artist friends there and we were deep in conversation about plans to participate in the Athens art fair.  We were going to invite others, but they misunderstood the nature of this fair – thinking it was a commercial venture, when in fact it is an artist’s platform. We’ll go it alone.

We gained so much from the Stockholm one – SUPERMARKET in 2012, it was so worth doing.

But anyway, here’s a review of the meeting http://www.artinliverpool.com/review-liverpool-artists-network/

So while waiting to meet up I strolled into Paperchase to look at the sale.  I picked up several items as I would normally, then had to stop myself. I’d decided to live solely off my workshop earnings this week to see how things are if I don’t work full time.  A measly amount, but I wanted to get into the right frame of mind. I put the items back and walked out. That was depressing. I hadn’t realised that I had gottten so used to buying myself so many treats.

I’ve loved the time I’ve had this week – the time to see people, to attend meetings, see artworks and go to PVs (The Bluecoat tonight) But I’ve not liked the lack of money.  How do other artists manage?

January is definitely a hibernation month.  I seem to be constantly fighting against my natural instinct to sit on the settee with a quilt over me, eat (a lot) and watch TV.

Its good thing then that there has been so much going on to force me to get up and move.

Our PV at the Theatre last week was really well attended – despite the freezing rain.   Sales were slim, which we kind of predicted, but being a theatre and there being many performances over the month, there may be other opportunities. It’s good to know that unlike other venues, there will always be people around to view the exhibition.

Someone did offer to pay in instalments for one of mine, but I decided against putting up a red dot.  It didn’t feel like a definite offer, so I was cautious. If it’s still there at the end of the exhibition, we can sort something out.

A freebie housing magazine got in touch asking for photos so that they could do a spread. That will be good publicity. Not sure how they found out about the exhibition, but then we’ve been using social media to the limits, so they could have seen it anywhere.

My break from work started yesterday with running a workshop at the studio. There was initially loads of interest but only a few bookings.  With the studio laying empty for most of the last few weeks, I struggled to get the temperature up in there. I put an old thermometer up on the wall and watched it creep up from 2C to a mighty 4C even after having the heating on for 4 hours.

Fortunately, I’d bought a heater from home, which we huddled over while making things.  I stopped several times to warm my hands as my fingers had begun to feel numb. I hope next week is better.

I don’t feel relaxed at all at the beginning of these 3 weeks off. I feel apprehensive and slightly tense. I feel that I have something to prove – that I can make a living ….but deep down knowing that I can’t.

There’s heap of washing to do, the Christmas tree and decs are dumped on the spare room bed still, the dogs have left a trail of mud through from the garden and my kitchen table is piled high with tools and bits of paper, after framing works for an exhibition.
But its OK…
Four more work days to go before taking 3 1/2 weeks off and then I catch up with everything.

Until then, I am prioritising… what has to be done now and what can be done later.

Blogging probably isn’t a priority, but it helps me get my thoughts in order.

This week, I went up to Glasgow to see the Turner Prize. A nine hour round trip was slightly crazy to do in one day, but it was worth it.

We had friends who had worked at the Granby st  workshops to create prints for the Assemble installation, so it seemed only right to visit. I know I am slightly biased, but I really felt Assemble had no competition at all.  Despite working at Tate for so long, I wasn’t familiar with the other artists, so couldn’t visualise the body of work they had created to enable them to be nominated. Instead, I saw vast, virtually empty rooms and felt the words  ‘Where’s the Art?’ forming in my head (words that we hear so often in work from visitors)

Our time in Glasgow was short because of the epic journey, but we did get a walk through town and a good visit to GoMA. Loved, loved, LOVED everything about the place and NEED to go back there.

So in the evenings this week, I’ve been framing up work ready to install at the Unity Theatre next week.  Despite not having the time to get my ceramic planes fired with the transfers on, I decided to show two anyway.  It was difficult to think of a way to attach them to the frame, but I think they look OK.

Pricing was the difficult thing.  There is a ceiling price for work here – anything over £100 is unlikely to sell,  so I had mixed feelings about having them for sale.  The ceramic pieces took quite a while to make, but what can you do ?

As if the framing and preparation of work wasn’t enough, I’m running a few workshops from the studio, so that is taking a fair bit of prep time.

Again, what to charge has been a difficult one.  There’s no money here, so people won’t pay over £10 for a 2 hour workshop . I need quite a few to attend to make it worthwhile, but people seem slow on the uptake. Is it because I’m doing it at the studio and not in a gallery?  Last workshops I did (at the Williamson gallery)  were very well attended, but they charged me £40 to hire the room. I don’t really want to do that again – even though it was warm, clean and had loads of space :-(

I said I’d do 3 workshops, but I honestly haven’t had the time to plan the others. Well…they’re in my head, but I need to make the items, photograph them and then publicise …all takes time which I don’t have at the mo.

Anyway… just a week more of this chaos and I can get myself straight again (I hope!) 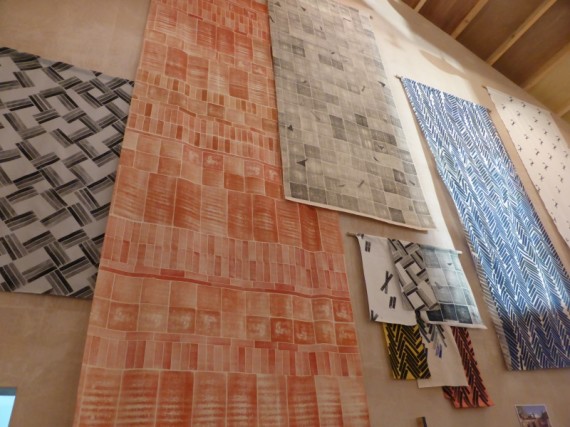 As I took down my 2015 wall planner this morning, ready to replace it with the new one,  I stopped for a minute to look at some of the highlights of last year ….

April: Exhibition in Sweden followed by a trip to Stockholm

May. Light Night at Tate Liverpool.  This is where we changed our ways of thinking on engaging with the public with the work.

June. Exhibiting in Sheffield. A really nice overnight stay and catching up with old friends,

July.  Exhibiting in London .. attending PV and also seeing  some great shows in the City.

August. A work trip to Yorkshire Sculpture Park. A first for me.

September. Curating a book exhibition at The Williamson Art Gallery – using lessons learnt during Light Night in May.

October. A trip to Leeds to see the British Art Show

November. A trip to Manchester to see the art Gallery (and the Christmas Market!)   Also having the first of the artists arriving for the Residency programme at the studio.

December. Christmas nights out. Several…and a review of the residency programme so far: http://www.artinliverpool.com/feature-translating-the-street-interview-with-the-artists/

It was a good year, though incredibly tiring.  Its only when you stop for a minute and look back over the year, you realise how many good things there were.

I can only hope that this year will be as fulfilling .