I’m now behind with the installation.

I had to spend a couple of evenings instead making work for our fundraising event next week. It was just two A5 works but I decided to make miniature warships on both (which reference an installation I made based on the book ‘The Cruel Sea’) and they were really fiddly.

One of the main things was that I wasn’t happy with the venue I was given for my work at the Threshold Festival. It was actually a great venue – light, bright, well visited etc… but I didn’t think it was suitable for what I was doing.

So I was shown images of another venue – which I love! Its perfect.  I’ll go to see it one night after work this week.

The other thing I like about this new venue  is that I’ll be working alongside people who I’ve heard of , but haven’t met, so it’ll give me the opportunity to speak to them in person. Both are sound artists, which is something I’ve wanted to explore, but don’t know where to start with it.

Now I’m awake ridiculously early as I have too many things going on in my head so I can’t sleep. I’ve been sent two lots of interview questions for various publications and the answers in my head are just mush.

I’m also annoyed that a guy I was working with yesterday was sneezing and coughing all over the place and now I’m afraid I’ve caught something.

I really can’t afford to go sick this week :-(

I’m trying not to think too much about everything that is going on around me at the moment.  If I think about it, I’ll start to panic, and if I do that, I’ll lose concentration and my work will start to deteriorate .

I will write about it briefly though. I find that if I start to back off into the shadows and lose myself in my work, people always assume that I’m not doing anything. I get handed responsibilities and lists of jobs and I end up doing things that I really don’t have time to do.

So this is happening…

As in my last blog, I’m preparing for the Threshold Festival. I’m making a large installation that consists of at around 1000 paper houses and branches. I worked out that if I did a minimum of 8 a day, I can just about do it (if I include ones used in an earlier installation)

8 doesn’t seem a lot when you just say it like that. But paper has to be prepared (and found!)  before I can start cutting them out. I’m doing this by getting up early, sourcing the paper, glueing it onto backing sheets and letting it dry while I go out to work. Then when I get home, I start again.

Its tedious and I’m going crazy, but so far, I’m still on target.

I try to do as much as I can on my break in work.  write emails, write plans, chase up things.

One of those things, is preparing to take part in the artists Platform at Art Athena in Athens. My work for that is sort of bottom of the list at the moment as I have to raise cash to do it first.  I’m thankful for my job, as I can take paid leave, but I still have to raise the cash for flights and accommodation. I want to do it, its important to me to do it.

Doing similar things in the past (SUPERMARKET Stockholm for example) resulted in so many connections and opportunities that are still ongoing. I’m still feeding of that, my work is evolving and the future is open to carry on connecting.

Sooo, yes, raising cash. I’m working with others on this one. A studio group in Liverpool are letting us use their space to do a fundraiser. In a nutshell, people have donated small works and we are aiming to sell as many as possible. I don’t expect to raise a huge amount, but if it will pay for the booth (£280) it’ll be worth it.    http://culture.org.uk/2016/02/postcards-from-the-soup-collective-at-roadworks/

I still haven’t done my own work for that. that’s today’s job as I am off.

Next its nearly time for the artists in residence at our studio to return and put up their work in response to their ‘placements’ in local shops. To be honest, getting any publicity for it has been a nightmare.  For some reason, despite the fact that its been funded by ACE,  that international artists have been working in ‘the sticks’ – where nothing like this has ever happened, that it will create new opportunities for more artists etc etc, it just isn’t appealing to the media.

I’ve managed to get this published, but very little else. http://culture.org.uk/2016/02/translating-the-street-alternator-studio-and-the-local-community/

I’ll have another go later…

Now though, as its my day off, I’ve been asked to mind someone’s dog for the day (as well as my own) . After all, I’ve got nothing else to do :-( 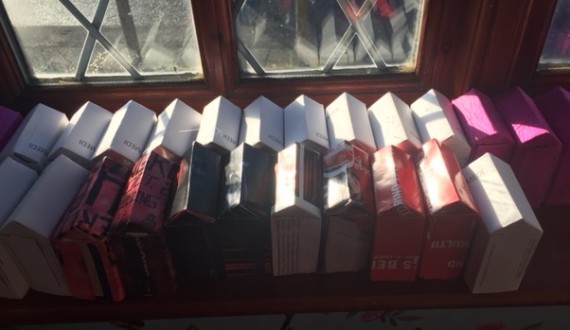 At last, I can now say that I’ll be taking part in this year’s Threshold event in Liverpool.

I’ve known for a few weeks, but they asked us to keep quiet until they rolled out the publicity for it.

I’ve been itching to do a large installation for a long time now, but there just hasn’t been the opportunity or the space I need to make anything that will have an impact.

So…as this is such a rare opportunity, I’m putting an absolutely huge amount of effort into it.

After planning my design, (which is based on the theme of Alchemy) I’ve spent my time making x amount of objects each day so that I can reach the target of over 1000.

Tedious and tiring….but its got to be done!

Sometimes, it amazes me how easily connections are made.

Yesterday, in the gallery, a guy asked if he could take a photo of the text of a particular work (as photography was not allowed of actual work)  I said ‘Yes’.. and there followed an exchange that would not normally take place.

He was an artist from Brazil (which I would not have found out if I’d refused his request) he loved this work and it inspired what he was aiming to achieve. He showed me Instagram pictures of his work and as the internet connection was slow, I followed him so I could look properly later. He followed me and we viewed each others artwork and commented.