I’m not actually used to talking to people all day – especially about my own work, so I’m finding this all a big step away from my normal routine. As I write, I’m sharing a dining room table with Debra – who is grading her students papers and Jean who is editing images , intermittingly talking about work and other things. Been here at this table a couple of hours already and its still only 8.30.

We’re waiting for the galleries to open so that we can take some work across and start installing.

The others ( Bruce Davies, Michael Borkowsy and David Cotton ) don’t arrive until tonight with the rest of the work, but we can make a start as Elena Thomas’s work and mine have a definite place in the gallery. They’re probably the most complicated as they involved stringing up supports, so its good to have a head start on them.

Yesterday ( My Birthday!) we had a lovely day out in Ellicottville, first visiting artists Sean Huntington and Patricia Eckstrom : http://www.seanstrees.com/ and http://www.patriciaeckstromartist.com/ who were having an open studio weekend . Their studio was situated at the foot of the Allegany Mountains and the scenery was absolutely amazing. I could see where they drew their inspiration from.

From there we headed across to visit Barbara Fox : www.BarbraFoxArtStudio.com picking up on a nifty technique she has of rubbing garlic on copper. Not sure where I’ll get copper from when I get home, but it’s on my list of things to try!

A bit of sightseeing and then back to our temporary ‘home’, where we spent the evening doing even more talking!.

Will try to update more tomorrow, but by then the house will have another 3 guests and I can’t see us all sitting around this table! 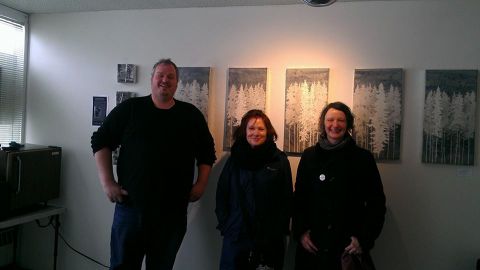 So here I am in Jamestown NY. Actually though, we’ve been here since Friday night, but it’s just been a crazy few days.

Let me think…. OK -we ( myself and Jean McEwan) flew to Buffalo via Washington, me with an enormously heavy bag (full of clothes, artwork and sweets for our host, Debra ) Fairly uneventful, but very long flight, which was made stressful by first the long queue at Customs in Washington, then having to pick up our bags ( which I never had to do last time I went to the US, just 5 years ago) and then another unbelievable grilling by two female ‘jobsworth’ numbskulls, who seemed hell bent on humiliating people. People in front of us had to open their luggage to be searched, so I was really panicking about the artwork I had in my bag. (plus the sweets etc I had in there after saying I didn’t have any!)

But a quick telling off and a threat of getting a $300 fine for having an apple, left us an incredibly short time to catch our transfer to Buffalo. But they didn’t open my case – yeah! ( not that I had anything illegal – it was just that we were made to feel so bad for even existing!)

Got there, Debra picked us up at airport, chatted…almost fell asleep in car (after all. It was close to midnight ‘our’ time and we’d been up since 5am) and made the 90 min journey to her house. Vowed to stay up till at least 10.30 ‘their’ time, so thought it was a good idea to do a detour to a liquor store. Got some really sweet red wine – attracted to its mad label. It was a bit disgusting, and despite waking at 4am with a banging headache and having to get up for paracetamols, I then slept til 7.30. Result!

So Saturday…. we had to leave around 11.00 to set up our stall at the Reg Lenna Centre for the SWAN event. ( zines and cards we’d made) Feeling a bit disorientated by now, we went off to find some veggie food ( which we did and it was excellent) and sat eating while poor Debra did most of the running round. Just after 12noon, we were able to use the room set aside for our zine workshop. By ‘we’, it was actually Jean’s baby, but I was there to help.

Really good afternoon making zines. It was so weird talking to so many people and swapping ideas. I had the usual ‘oh – do you know the Beatles?’ when I said I worked In Liverpool and I think they were a little disappointed when I said I didn’t.

So.. bringing this almost up to date, we went for a meal Saturday night for the artists who are in the present exhibition at the gallery we are taking over. Really nice idea that they set up this meal to ensure that all of the artists turned up to collect their work. Must try that ourselves one day!

Oh oh – it snowed while we there, so as soon as we got back to the house we shot out again to take some photos – amusing the neighbours who threw back their curtains to watch. Maybe the 3 months of snow they’d already had wasn’t so entertaining to them.

I went to bed shattered around 10.30 and woke up at 4am full of life this morning. Ho hum.

But that’s all I can write today. Its.. .. oh I don’t even know the what the real time is anymore…. 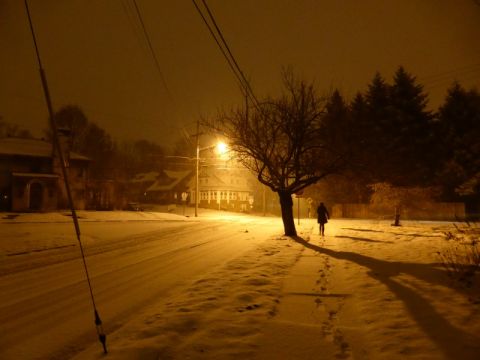 I had no idea that SWAN was an international thing. http://www.womenarts.org/swan/ Jean (McEwan) and I have been asked to attend on 29 March but I never thought of it being anything other than a small Jamestown event. How come I hadn’t heard of it in the UK? Of course I knew about International Women’s day, but not this. Even though it means arriving 3 days earlier than the others, we said ‘Yes’ because we thought it would be a good way of meeting other artists. Reading about the event, has made me realise how much organisation has gone on ‘on the other side’. I’ve been so absorbed with coordinating everything here, I never stopped to think how much has been done elsewhere. Our trip over to Jamestown is becoming more and more significant.

As the departure date gets closer, I find myself winding down and switching off in all areas. I’m just going through the motions in work, looking at my watch more and getting more impatient and rattled with the public.

I am supposed to make a couple of small works for the exhibition, but the more I think about having to do specific works, the more I panic and get distracted. I’ve found myself cleaning out the fridge or other equally mindless things, rather than working. I have so much to do…and for fear of sounding clichéd, have so little time ..

At least the PV invites are sorted! ( see images)

For different views of this exhibition and everything it involves, read the ‘artists talking’ blogs of Michael Bowkowsky, Jean McEwan, Louise Atkinson and Elena Thomas. ..and get background info on the website: http://sciartistprojects.wordpress.com/

Is there such a thing as font snobbery? Heated debates abounded today.

It’s such a difficult thing when it just doesn’t feel right. I mean, you don’t want to offend and say’ don’t like it’, but if we’d just gone with it, well, it will just fester wouldn’t it?

The images chosen are great, don’t get me wrong. The design is fabulous… but the font used…. meh :-(

Although it would have worked well anywhere else, it just didn’t sum up the group. Does that make sense?

The main problem is that we will be occupying two very different galleries, so we need two different PV cards. The simplest solution (in my opinion) was that we used an image for one, and then just reverse it for the other.

So two very different images were chosed to represent two very different galleries. To try to tie them together, fonts were used which sum up the word ‘Colonize’ . Yes, maybe it did, but for want of a better desciption, it made us look a bit cheesy.

Being a basic Ariel font for almost everything type of person, I feel like one of those …’well, I don’t know anything about art, but I know what I like’ People.

Not so for some of the more expert in the group.

Another day, another …well, I won’t say problem, but maybe a …hiccup 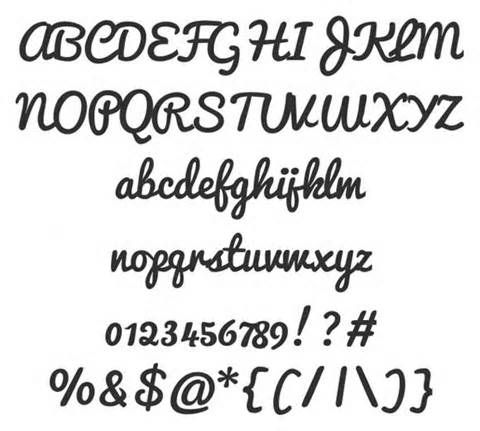 I’m now getting very adept at finding money saving offers. From saving a £1 here and there by getting a certain bus to work for example, to cutting out coupons – something I thought I’d never do!

I was thrilled then to find out recently that one of the perks of the job is being able to borrow an ICOM card for while I am in the US. Oh the joy!!

So we can’t afford food – but hey, I can see any exhibition I want for free :-) 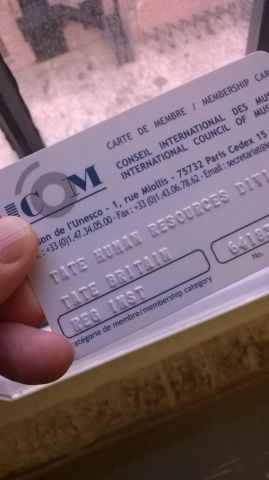