I’m writing about my studio, but to be honest, I’ve had no time to work in there these last few months. I have worked…. though at home, whenever I could.

I’ve been trying to raise cash for future projects, so I’ve been doing overtime in my paid job. It leaves less time to do my own work,  but needs must.

Its the second time we have invited artists to work in local businesses and create work  based on their experiences.  Hopefully, I’ll be able to write more  about it after the event.

In the meantime, I’ve been coordinating the work of several artists to send over to Harrington Mills studios, to be part of the Platforms project in Athens. I’ve struggled with my own work for this. Its very small (25 x 25 cms including the mount) and its 2D. Both have been difficult for me. I’m submitting a collage (see below) but I have a couple of days to alter it if I change my mind. That’s probably not going to happen… given the list of things I have to do this weekend, but we’ll see. 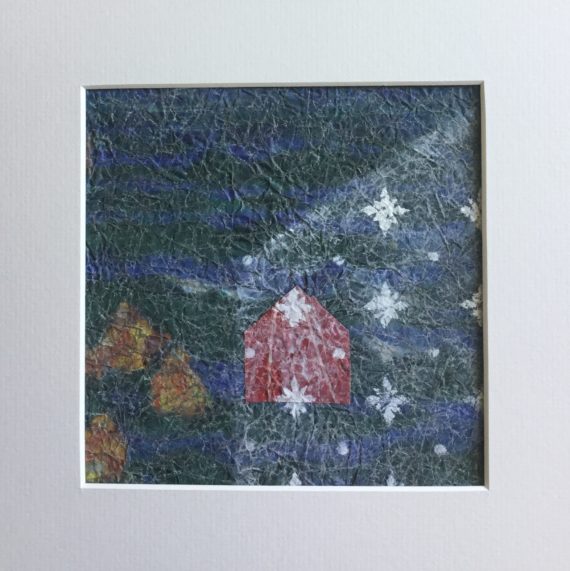 While all of this is going on, I’ve been communicating with London based artist Fion Gunn about the workshops we’ll be doing at Tate Exchange in Liverpool this summer. I’ve booked my train ticked to London and once there, I’ll assist on the trial workshops there so that we can bring the project up north.

I am excited to be working on so many diverse projects, but it is a little terrifying too.

On  that note though……I’d better get moving…..

I’ve done it again… said I would blog more regularly, but then things happen and another month (or two) goes by.

It really has been a learning curve to just sit back and let things happen. I’ve seen ‘opportunities’  come and go….and I’ve just let them. Its been liberating.  That ‘open’ exhibition at the gallery I would submit work to every year… I just let it go. I’m less stressed and better off financially!  (and realistically, who even notices your work in these ‘competitions’?)

Ironically, since deciding to ‘do nothing’, I’ve been contacted twice by schools and organisations to run workshops. Although that is fantastic to be asked, I’m not knocking that… it would mean taking time off work this  early in the year and I really don’t want to do that.  Although better paid that my day job, they are incredibly time consuming .

I needed to step back and I think it is working.

A London based artist contacted me a few months ago asking if I would like to work with her on a Liverpool based project.  Its a hugely ambitious project and the sort of thing I would have tried to organise in the past.  But , its been great letting another artist take the lead for a change.

It involves working with several organisations including Tate Exchange in Liverpool ( yes, I know I said in my last blog that I’ll be showing in Tate Exchange Tate Modern over summer… that’s just coincidental)  and she has managed to attain Arts Council funding. Fantastic again that I didn’t have to set aside so much time for application writing!

I’ve had several meetings with the artist and spent a considerable time communicating through emails, so hopefully I can write a full blog on that project in a couple of months.

Yesterday, I went to the artists breakfast at Tate Liverpool.  It wasn’t as busy as the last one which was a shame, but the weather was pretty lousy. …..and it did start at 8.30. Does that say more about artists?

It is a huge thing that a director of a major art gallery wants to meet artists.  I hope Helen Legg makes changes. She’s made a good start so far.