Still trying to get the ‘fog’ out of my lungs from yesterday’s trip to Kurt Hentschlager’s Zee at FACT in Liverpool. Yes, I did fill in the disclaimer and the check list of health issues, but I still feel slightly bronchial this morning.

Doing an art trail yesterday was meant to give me some inspiration for the work I am taking to Stockholm next February. Matisse at the Walker, a second look at Democratic Promenade at the Bluecoat ( 1st look when I did the book fair there a couple of weeks ago)… finishing off at Fact, just made me want to go shopping instead. ( not a reflection on the work – just me feeling fed up)

Funnily enough, when I got home, I found a ‘bag of bits’ and an old half painted wooden box on my step, that a friend had left for me. Ah…. now I feel more inspired!

Sometimes I could just kick myself for putting in such a ridiculous proposal to make mine stand out from other applicants.

So yesterday, I heard that my proposal was accepted to be part of a group show at the Chapel Gallery Ormskirk, next September. It is ages away and I have plenty of time to prepare…. but you know when you just think %$!*%!# s !! WHY did I say I would do that???

The gallery exhibiting artist in me, took over from the business woman I should be and I left most of the work on the table for display only and unpriced.

I was in the ‘fortunate’ position of it being my day off from work -a day I normally wouldn’t expect to bring in any cash, so with the added bonus of getting the table for free, I was under no pressure to sell.

I did however decide at the last minute to bring a container of handmade cards which literally took minutes to make. I sold quite a few of these for £1.50 each.

How on earth can anyone make a living like this?

This being my first book fair I also wasn’t quite prepared for how people handled my work. What gives people the right to pick something up, handle it roughly and throw it down again? I was all but hyperventilating , stopping myself from screaming ‘get your filthy grubby hands of my work!! ‘

On the plus side, people took my cards and I got a lot of good comments. I’m not going to rule it out completely, but I don’t think this is for me.

How much can you realistically charge for something that you have spent a full week working on? I’ve been to book fairs in the past, browsed at the goods, admired them and put them down after seeing they cost more than £25. Isn’t that incredible? Now I’m faced with that challenge… pricing. To be honest, I’d rather just show the work and not have the humiliation of selling something for the equivalent of working £1 an hour. BUT – we will just have to see how tomorrow goes … 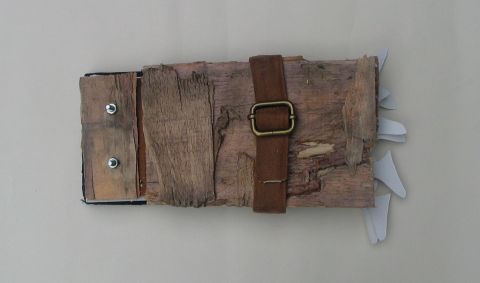 I feel a lot more relaxed about this new work now. I’m treating it as not only an exploration of ideas but also an opportunity to bring back to the surface skills that I have, but never use. In that respect – none of these works are failures.