Yesterday was meant to be my day of rest in the middle of a 5 day break from work. It didn’t quite work out that way though as I received an email from The Bridewell saying that they had accepted my work for ‘Possible Impossibilities’ – the next exhibition at the gallery. I almost didn’t enter, as it was classed as a ‘drawing exhibition’ and I haven’t actually sat down to draw for a while now (apart from sketches and working out ideas that is) my whole perception of Drawing though, changed when I saw the exhibition Tracing the Century: http://www.tate.org.uk/whats-on/tate-liverpool/exhibition/tracing-century-drawing-catalyst-change I ‘draw’ with paper……… and although I wasn’t 100% sure that my work would fit the bill, I submitted it anyway. It was very last minute and I hadn’t quite finished it, so getting the email had me getting out the glue and putting it together ‘proper like’ so that it could be displayed. Then, as yesterday was my only ‘free’ day, I had to go across to deliver it. Today, I’m getting the Liverpool Art Month bus tour to see some exhibitions. http://www.artinliverpool.com/?p=41543 The organiser was really concerned yesterday that only 5 people had booked (inc me) but that’s a lot better than last week when NO ONE bothered. That is so unbelievable…. but then is it really? The last few exhibitions I’ve seen have been sadly lacking in visitors. Why doesn’t anyone bother anymore?? 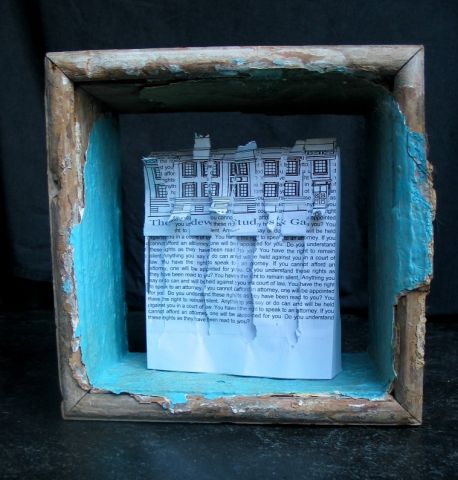 Would I include time spent in meetings when calculating my fees?

I spent about two and half hours today discussing the installation and future workshops. My second lot of workshops will be with yrs 4 + 6 of a local school (local to the church that is) so this morning’s meeting was with the head teacher to work out dates and times etc.

A second meeting with the organisers of the project followed straight afterwards. This was to discuss time scales and other logistics PLUS my fee. They said I can send in my invoice any time now, so they will know how much to spend in other areas.

Hmmmm…. difficult to work out so early on as I don’t know how much of the work I will have to do myself OR how long it will take to install.

Maybe I should calculate a worst case scenario to be on the safe side?

Day one of the workshops….. Its half way through the afternoon and all I can think about is having a glass of wine : / I felt like a glass last night too, but as I’m working with children – and a church one at that (!) I didn’t want anyone to smell alcohol on me : (

So… I got to the church around 10am this morning and was led to a back room where they had set up activity tables. The children were very young – from 1 yr to about 3 yrs old, so it was a bit limited to what I could do with them. I’m glad I’d cut out so many shapes beforehand though as all they were able to do was stick bits of paper onto them. They were OK though and we managed to make 20 – which was a huge achievement.

The odd thing was though, that the woman volunteers kept saying to me ‘This is really good of you to help the church like this’. Didn’t they know I was being paid to do it? Best not mention it them I thought. I had already learnt that communication is not a strong point.

So after an hour and a half of some of the kids making something from the shapes and the others either belting each other and screaming or actually eating the glue…( why would they do that??)… I headed home with a banging headache.

An hour later, I was meeting up with Pam Sullivan – artist in residence at the Williamson Art gallery, discussing ways that the communities she works with, will be able to help make more of the starflies. I think it would be good to have as many of the local communities involved as possible.

With what is left of the day now, I HAVE to try to make some more paper shoes for the recycling exhibition. Those weeks that seemed so far away have really crept up.