I’m currently in love with Betty Woodman ….   an artist I had never even heard of until two months ago, when I went to a briefing about the work that will be shown in the Liverpool Biennial.

My own feeble attempts to combine ceramics with other mediums paled into insignificance when I saw her work.

I went out to see a few pieces in real life when the Biennial opened – the fountain shown in the images and the large mural at Tate Liverpool. Both quite spectacular.  Her work really made me want to experiment further.

She has work in many venues around the city, which is quite unusual for the Biennial.  I’ll try to get out to see a couple more in the next few weeks.

I have a few ceramic / mixed media works in our Biennial fringe exhibition Moirai (see image below)  But they are quite small. I think when I get some time off at the end of August, I’ll experiment with larger works in the studio. 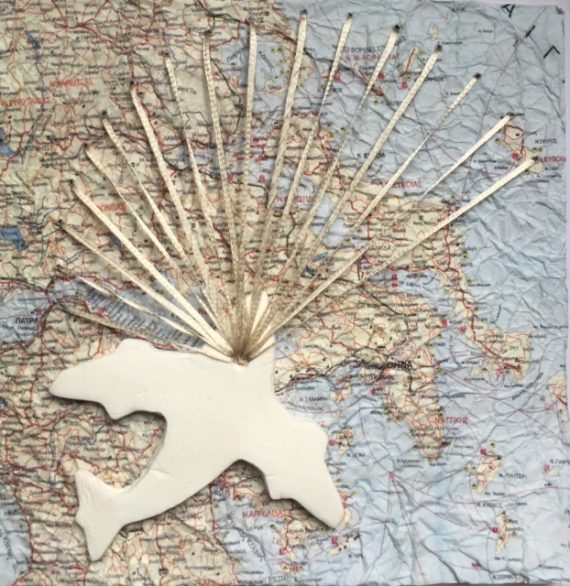 I know this may seem a massive departure from my paper installations, but they are quite similar materials to work from. You knead and shape both to get the desired effect.

I also think its healthier to break away from your normal work for a while. It gives your brain a rest and helps get ideas flowing.

Even though the Biennial is on for 14 weeks, I never do get to see all of it. I’ve seen 6 sites over the last week and that has completely drained me. I know some people who have ‘Biennial days’, but that is incredibly hard to do. You start to feel angry and frustrated after a few hours as you just can’t absorb that much art.