In my first post for this blog back in March I wrote about The Selfish Gene, Richard Dawkins’ theories about the origins of life, and the “exceedingly improbable” occurence of The Replicator – a molecule which had the ability to create copies of itself. I paused at the end of the section about The Replicators as I felt I’d like to somehow interpret this idea in my work, and began making a series of drawings working into some of the prints I made when experimenting with the photolitho technique I was learning at the time. I’ve been using a system whereby I begin by drawing a single point – a small circle (a cell? a molecule? an organism?) which sends out two stalks, each of which carries a new cell/molecule/organism which in turn sends out two more stalks each with a new cell/molecule/organism and so on and on and on…

In a more recent version of the drawing I started with multiple points of origin, each one developing replicas of itself. 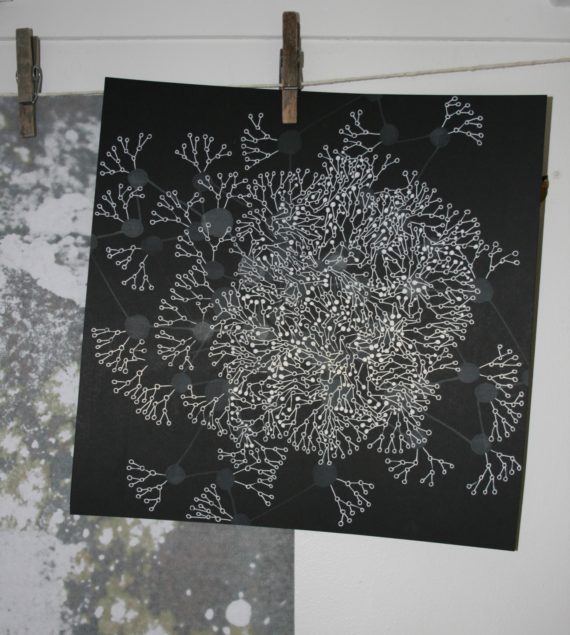 I’ve often struggled with drawing in my practice (what do I draw? how do I draw? what’s it for?) but I have recently settled into a happy way of working which involves this sort of repetitive process and which can result in numerous works based around a system. This seems fruitful – and more importantly, I love doing it and can’t wait to get in the studio to get on with it. I also like the fact that I’m building on my printmaking work and combining it with something else to make new work.

The wider implications of this work are promising. I’ve been writing proposals for my project and describe how it “begins with the origins of life and goes on to speculate about possible futures” but have so far been wondering how this speculation will begin to present itself in the work. Notions of replication and replicators begin to introduce new ideas to be developed, along with new thoughts which came up in conversation yesterday about “synthetic” and “synthesis”. I do have a bit of a penchant for alliteration so I googled “synthetic aesthetic” and this came up – http://www.syntheticaesthetics.org/ Food for thought.