It was a strange working week last week. My main focus was on completing my Grant for the Arts application plus some small applications for match funding. By the end of the week funding fatigue was setting in and I couldn’t wait to click on the “SUBMIT” button. But at last they’re just about done, and in fact two out of four have been submitted with the remaining two going anytime now.

What always happens in this situation is that I tend to lose focus on my studio work. Also, I’ve just finished a big drawing I’ve been working on for a while (not really very satisfactorily), so there’s a bit of a pause while I decide what to do next. There are several options: (time for a list here I think… some bullet points even)

So, in this sort of unfocused limbo state I did what I always do – make a lot of cr**py little drawings that did nothing to improve my confidence or humour and really needed to go in the bin. Until… **small cheer**… these happened! 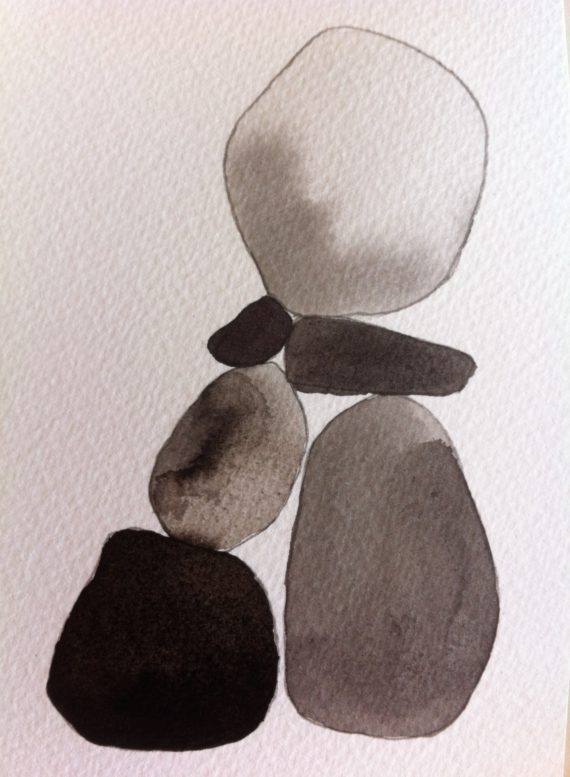 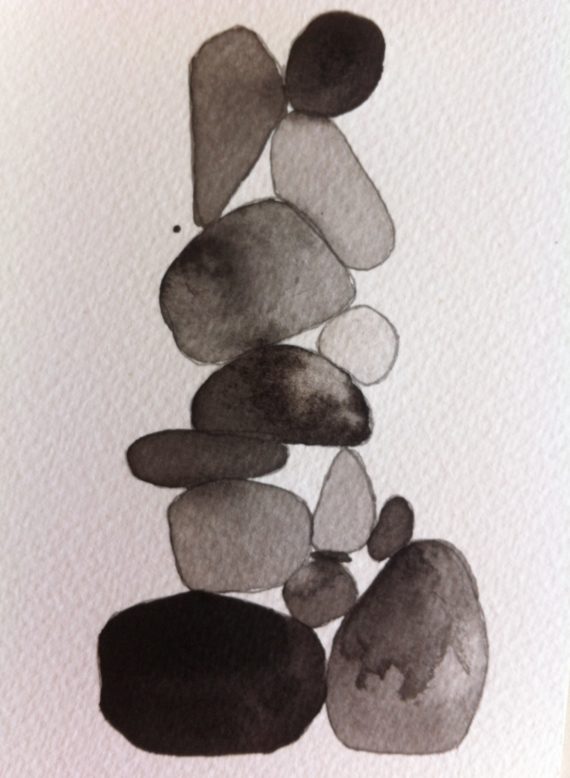 These are only tiny sketches but they happened very quickly (a good sign) and immediately felt like something that were something which is always encouraging.So next week is a short one and I’ve only got two days in the studio, but I’m confident that with the funding applications out of the way, I’ll be able to make a decision about next priorities and get stuck in!

I’ve been making these little things. 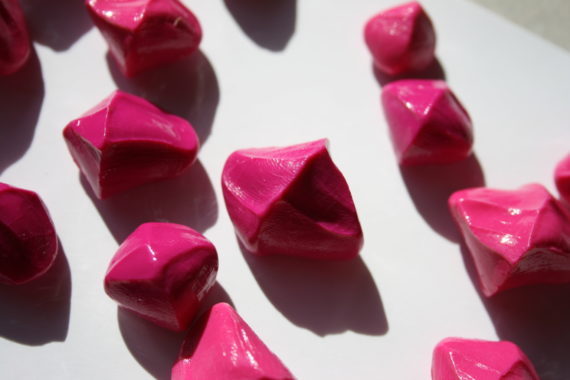 I made some of them years ago, though they weren’t pink then, and they didn’t really seem to be anything and so they got put in a box labelled “CURIOSITIES” along with some latex pods, some perfectly circular discs cut from laurel leaves, a duck’s bill I found on a walk and some wax casts of the inner cavities of peppers.

But now all of a sudden they seem to be something, so I have been making more of them – this time in that unique shade I call “plastic pink”, and I’ve further enhanced their plastic-ness with a coat of super-glossy varnish. I’m not sure yet whether the super-glossy finish enhances the skin prints on their surface (an essential feature) or masks them. 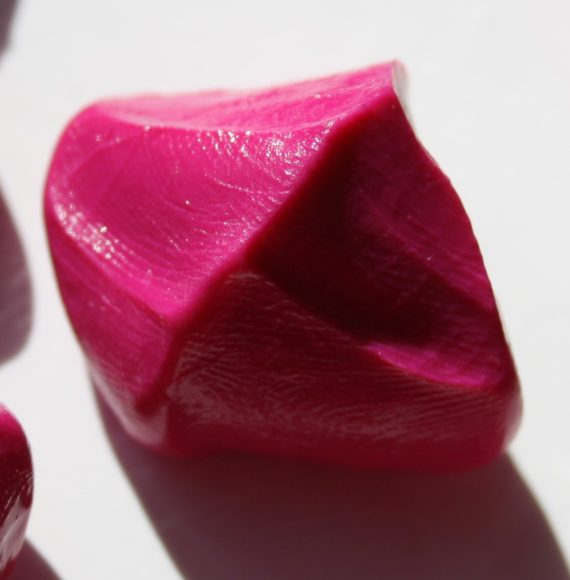 What I am sure of is that the varnish isn’t drying properly – in fact it seems to be getting stickier! They’re sticking to my fingers like sticky sweets.

On another (related) note, I’m very excited to have nearly finalised plans for the workshops and events for my Once in a Universe GFA application. THE most exciting development this week is that a very special person has agreed to give a talk at my proposed launch event – geologist and Emeritus Keeper of Natural Sciences at The Booth Museum, Brighton, John Cooper! Can’t wait for that. 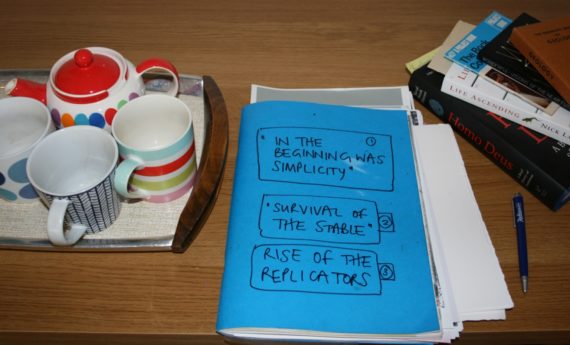 It is so easy to under-estimate the value of public engagement in R&D – there’s no doubt I’ve been guilty of this myself and have been made to think more deeply about it. In the sort of research I want to do, it’s so important to make opportunities for conversations with a wide range of people about the subjects I’m thinking about.

Yesterday I met with three artists whose work I respect and value, all of whom are great at getting people together to make and do stuff. How great it is to be part of a network of generous, professional, creative people and to be able to benefit from putting our minds together to think about these things. I’ve asked the three to run some practical workshops for my project which will not only get people making and doing but will also get them talking about some of the interesting and challenging ideas and questions which the themes of my research bring up.

I’m at that really tricky part of the planning where the foundation for the project is solid but the subject matter is still very wide. There are so many potential directions  it could go in that it can be difficult to focus, so it was really useful for me to have to spend a day thinking about how to articulate the key areas of the project to my collaborators without inflicting information overload. 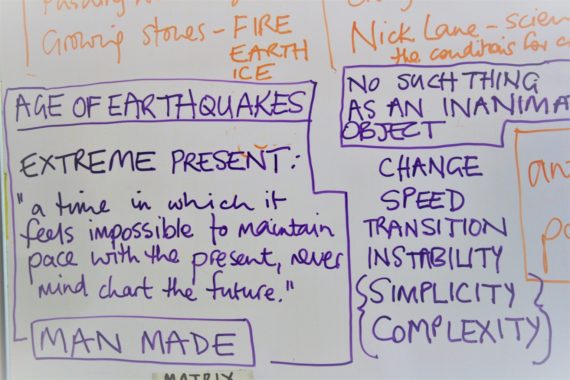 We had some really useful conversations and the discussions helped me clarify and hone quite a few of my ideas. As usual, this pruning process means having to let one or two things go in order to focus on key areas, but this sort of editing is a crucial part of the process and actually, planning, fundraising and proposal writing provides the framework that helps me do that pruning. Here are a few notes I made at the end of the day. It felt like progress.

“I want to work with the public, other artists and scientific experts to explore ideas about change and evolution in the Anthropocene* era and “extreme present” – “a time in which it feels impossible to maintain pace with the present, never mind to chart the future.“**

*Anthropocene: relating to or denoting the current geological age, viewed as the period during which human activity has been the dominant influence on climate and the environment.

2. Juxtaposing/merging of manmade and “natural” so that it’s hard to tell the difference

3. How life might evolve in the Anthropocene era (plastics, future geologies and the influence of human activity on the evolution of living organisms including the human body)

4. Extreme present – speed and the pace of change

The Selfish Gene by Richard Dawkins

(I know, I know… it’s not really a good idea to try to read four books at a time but that’s just the way it is. Slow progress though.)