One of my main aims for this year has been to find opportunities to continue to work on a larger scale – to make things that are bigger than me – but at the same time my mind is full of questions about sustainability and waste and how to reconcile these conflicting issues. So to help address the latter, I have introduced a policy of re-use, recycle, re-configure and where possible reduce. I’ve been working on top of old drawings, re-using materials, re-configuring old work and reducing waste.

The other issue of up-scaling is equally problematic, not least because of finding space in which to work on a bigger scale. But now, thanks to the support of other artists, I’ve been able to take advantage of some opportunities to work in a bigger space. I started off the year by applying for  residencies from Glasgow to New England and several places in between, but the nearest I got to success was a shortlisting – which was nice… good to know I wasn’t completely discounted, but ultimately not that useful. So thank goodness for the generosity of friends, collaborators and supporters who are prepared to offer opportunities for nothing in return, just because they can.

The first of these opportunities came as a fantastic invitation from artist-friend Sarah Pager who generously offered to share her space, her facilities and her knowledge and expertise if I wanted to come and spend a couple of weeks or longer working with her in the Sussex countryside. How amazing! So far I’ve been there a couple of weeks and will be going back again in a couple of weeks time. 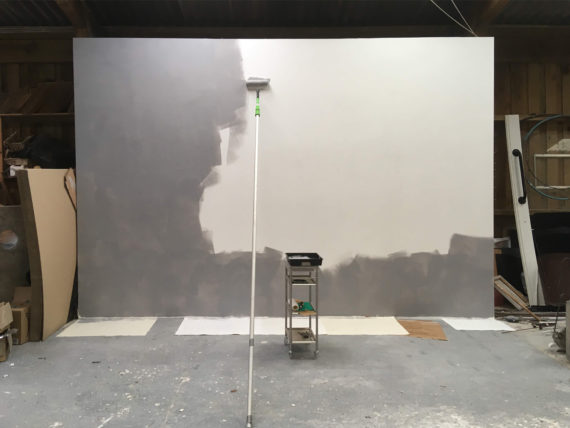 I wanted to make some large scale wall drawings and then perhaps try again to make one of the big soft “rocks” which I’d attempted to make a couple of years ago which ended up looking a bit like bad stage scenery (which I rather liked). Here they are. 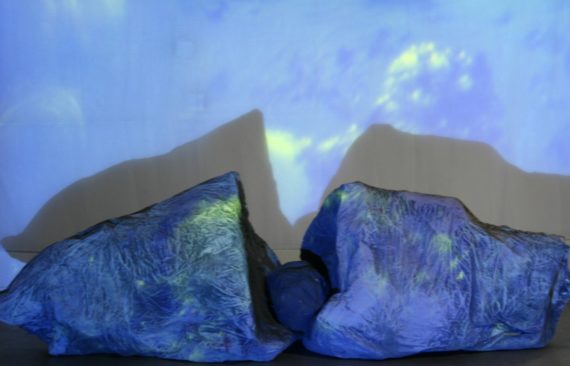 But first the drawing… this was no.1 on the list as it is one of my priorities this year. We’ve been talking a lot about scaling up in a group which I run, and all the issues related to it – cost, space and storage being some of the key problems. So my plan involved cheap materials – in this case chalk; drawing on the walls means no storage, and the space issue was already sorted thanks to Sarah.  On Day 1, off I went, chalk in hand, ladder ready, with a plan to combine within the drawing the clustering shapes I’ve been working with for a year or more, a rock-like form which perhaps could translate into three dimensions later, and some contrasting mark-making which might somehow suggest a sort of merging of man-made and natural, organic and inorganic. Nothing complicated. 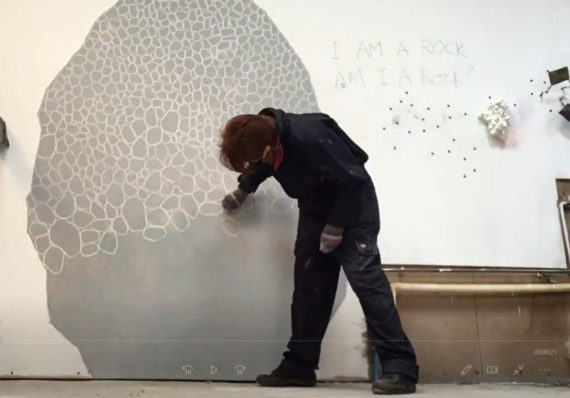 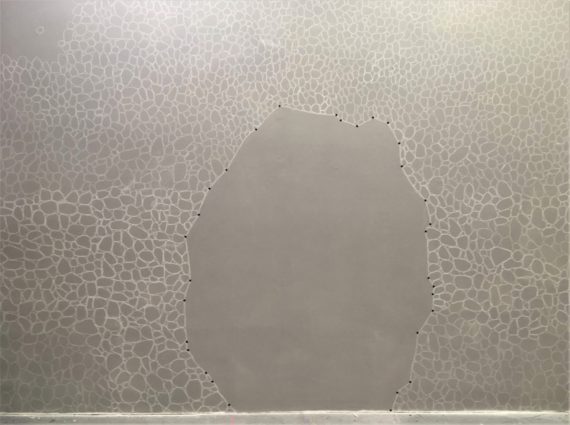 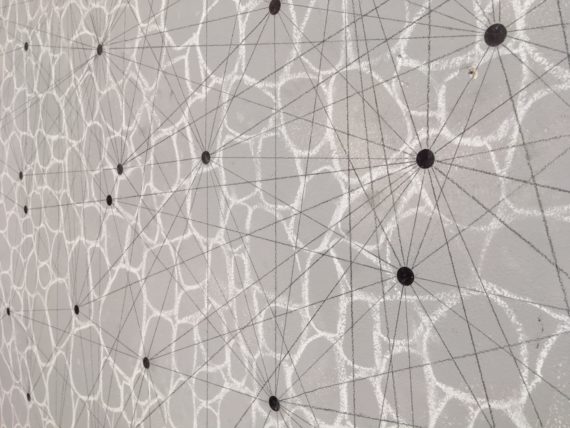 The drawing just involved time and effort on my part – that was relatively simple, and enjoyable, as I relished the chance to get stuck in to a physical drawing process I love, and spread across a large surface. The bigger the better for this for me.

But making an object was a whole different proposition.

I had four criteria: the object should be bigger than me, soft (not rigid), light weight and cheap. Sarah suggested bulking it out with polystyrene or bubble wrap over a strong armature before making my final covering of fabric, and, continuing the cluster theme in my method by bundling the bubble wrap into balls and clustering them into the right sort of shape.

Mistake no.1: I built an armature out of cardboard. **sigh**

Sarah had suggested steel or something equally solid but she’s a proper sculptor with proper skills and I wanted to do something I could manage and repeat by myself.

It wasn’t just any old flimsy cardboard but strong cardboard boxes glued and taped together into what I thought would be an adequate load-bearing tower to hang my bubble wrap bundles onto. How naive. Even bubble wrap gets heavy if there’s enough of it. 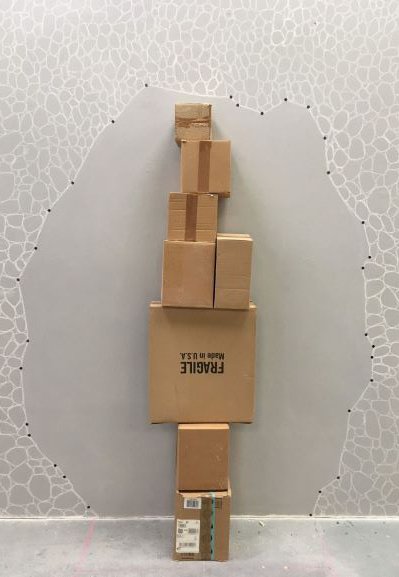 Mistake no.2: I thought that my stash of used bubble wrap would be enough. Nearly 400m of bubble wrap later… 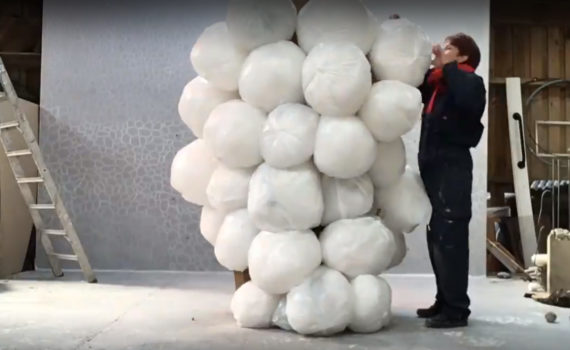 Mistake no.3: My cardboard tower didn’t really have a solid base or a low enough centre of gravity and although it stood up pretty well, by the time I got to adding the final few bags of bundled bubble wrap there was absolutely no chance that it was going to stay upright on its own.

But let’s take the positives…

What I learned: in short… A LOT!

A lot about the sort of planning and preparation needed to construct something that will do the job it’s asked to do; a lot about quantities involved in making big work; a lot about how materials behave… I could go on…

But as always, one of the most exciting things was making something which I hadn’t even planned to make – a giant cluster! So I didn’t get as far as making it into a “rock” – instead I discovered how to make a form which previously I’d only made about the size of a golf ball, or perhaps a tennis ball at a push. Now here’s a cluster which is bigger than me! A cluster I could get inside, or roll down a hill, or let it blow along a windy seafront! I love it when I make something I didn’t mean to – it’s one of the most exciting things about art.

So what’s next? 1. Plan how to make a structurally robust armature, 2. Unpack all of that 400 metres of bubble wrap from the collapsed cluster at Milton Street and re-use it to make a new cluster, 3. Eventually have another go at making a “rock”.